Reggae is one of Jamaica’s biggest exports, an ambassador of sorts, expounding on Jamaican life brimming with Rasta humanistic philosophy. This music is the voice of many; it has crossed geographic boundaries and unified races. One aspect of reggae has remained constant or at least has evolved slower than the art form itself, is how the music is delivered with the sound system.
The sound system has gone unchanged for quite some time. It may have gotten smaller and more compact but essentially it’s the same. Turntables replaced by controllers, record crates replaced by laptops and passive speakers by powered speakers.
On November 12th at Record City, I got to listen and enjoy the Soon come sound system. Soon Come is a live production of dub on the spot and in real time. I got a chance to pose a few questions to Dan Brenner (100dbs) and Monika Julien the creators of the Soon Come Analog sound system.

Q. What have you been up to this year?
A. We met about a year ago, and being that we’re both musicians and huge fans of Reggae music, we started thinking about how to collaborate. This project is a nice way for us to produce and perform that doesn’t require a ton of people or coordination. A lot of work was done up front in terms of thinking about the setup and engineering. After a recent trip to Kingston, we got a lot of inspiration and accelerated our pace of production. So what we’re doing now is creating new productions of foundation riddims.

Q. What’s behind the name Soon Come
A. It’s kind of a joke – it took a while to get things together and arrange our first tunes. There is also a simple approach towards getting the work done. We love iteration and versioning… so it’s this vibe where we may be very patient, and we stay on a riddim for a while until we find a sweet spot, hence “Soon come”.

Q. What is the analog sound?
A. Basically, it’s a method of live production that uses vintage-style synthesizers for all of the sound sources. This means that practically everything people hear is generated using analog circuits instead of something more modern. It gives the music a different sound, and is often less predictable – for better or for worse.

Q. What makes your sound system different from the conventional sound system?
A. It’s almost a misnomer in terms of the Jamaican interpretation of a sound system. We actually rely on sound system operators to provide amplification. Luckily, there are quite a few here in NYC, and there are also some venues that have great sound, even if they’re not using the traditional Jamaican definition of a sound system. When we talk about being a sound system, we’re talking about providing the production as a platform for vocalists and instrumentalists to do their thing. It’s almost like a band, but instead of a big group of people playing instruments, we are conductors and engineers and we’re directing the machines to do our bidding… then mixing the results.

Q. What is it in detail and what are the components that comprise the system?
A. We love computers, but a lot of times we’ve found that it’s difficult to get the sounds we want out of software or digital instruments. So we only use the computer for storing sequences and let it do what it’s best at – being the brain of the operation. The computer will give instructions to each synthesizer, and then these instruments produce the signals that we can modify and interact with as they’re being played. The rest of our setup includes a drum machine, bass synthesizer, lead synthesizer, and chord synthesizer (for the skank). We’re able to mix freely between these sources using a 4-way mixer, and we have effects in the mix as well.

Q. How did the idea to play Record City come about and how was it?
A. We wanted an intimate place to do a kind of soft launch with a chill vibe. We reached out to the owner, Ian, and he loved the idea. So we called up Screechy Dan, Johny Go Figure, Peter Ranks, and Willow Wilson to try it out. We all had a great time, and it was a marathon session. Three hours was very ambitious; we probably spent too much time on each riddim. Thankfully, those guys are all very talented and we have fantastic chemistry, so it didn’t feel like it dragged on too much. We have a little more than ten riddims fleshed out right now. As we work on more riddims and variations, and collaborate with more artists, I’m sure we’ll find our sweet spot. After catching up with Ian, he agreed it was a success – he sold a bunch of records and people in the neighborhood were passing through when they heard the music from the street and saw us through the window.

Q. Whats next for the analog sound system?
A. We’ll be performing at Downtown Top Ranking with Deadly Dragon Sound on Thursday, December 15 upstairs at Leftfield (87 Ludlow Street, Manhattan). This is a late night party that starts at about 11:00 PM, and we’ll be playing in between selectors.

Email 100dBs here for booking or other inquiries:  [email protected] 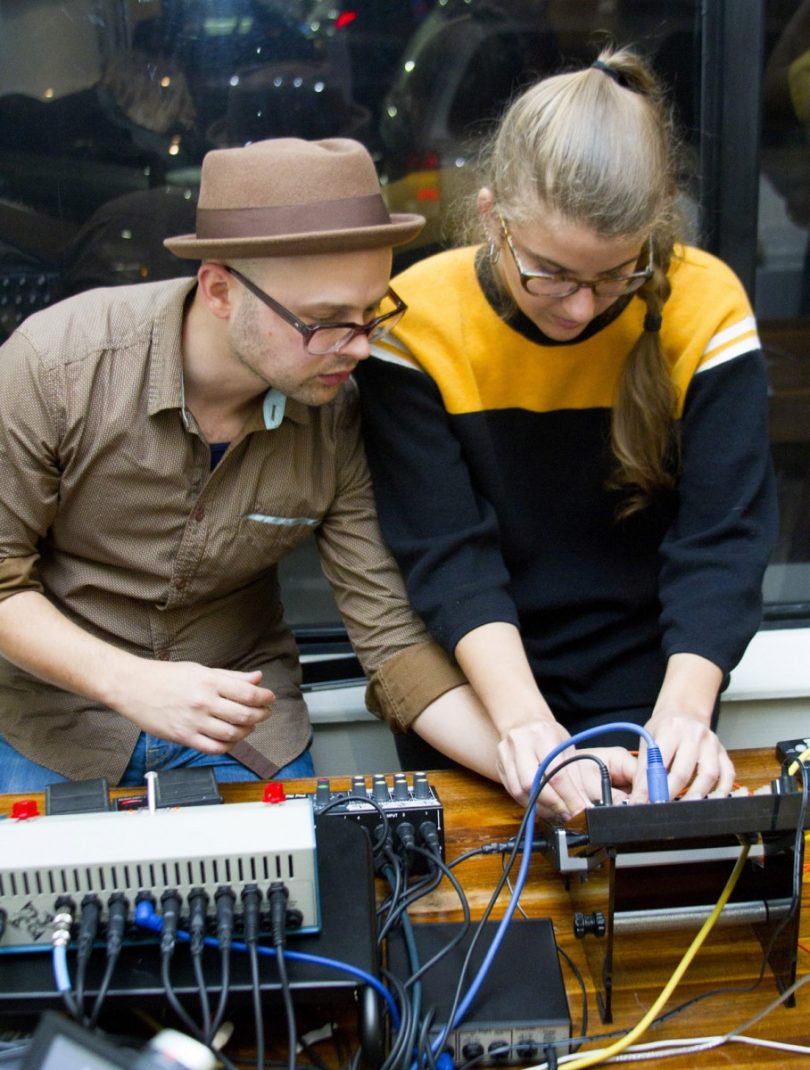 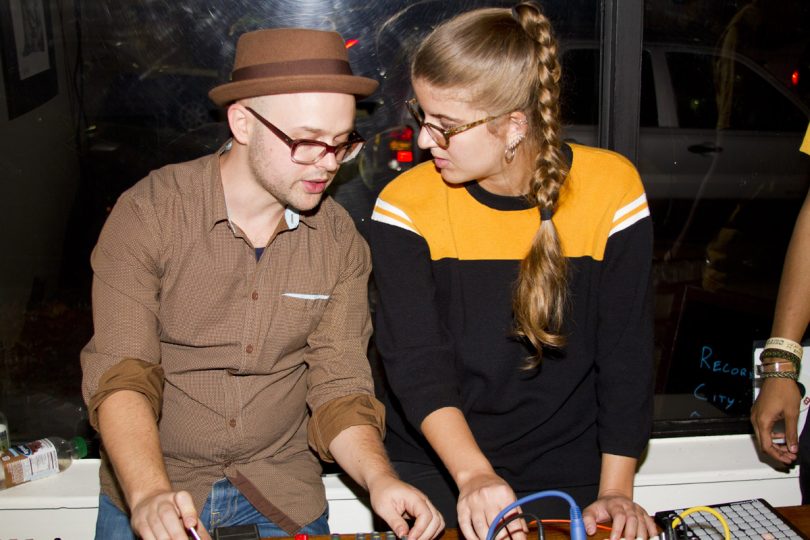 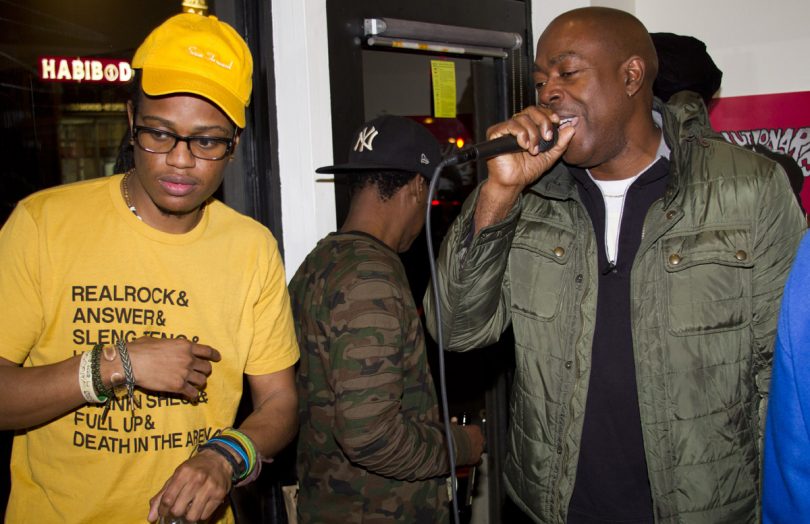 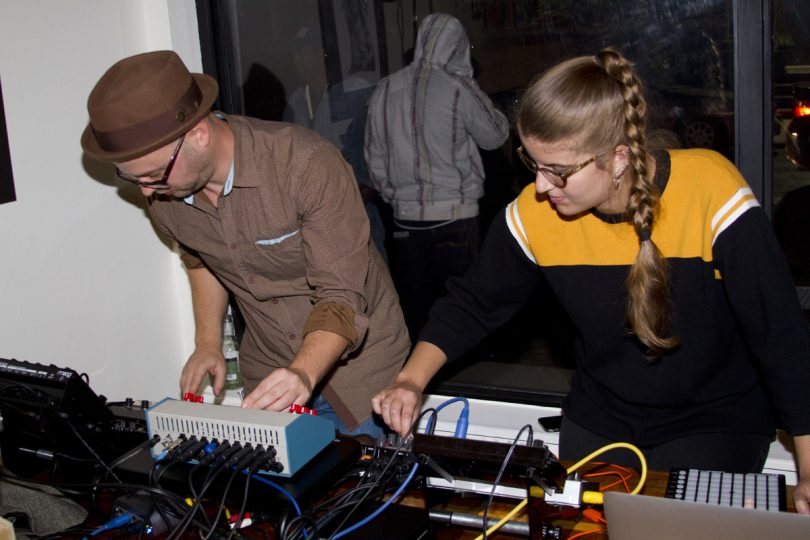 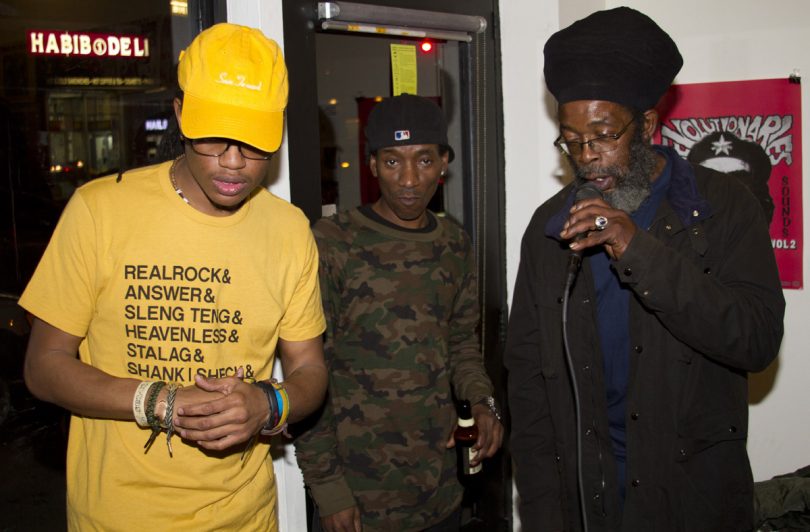 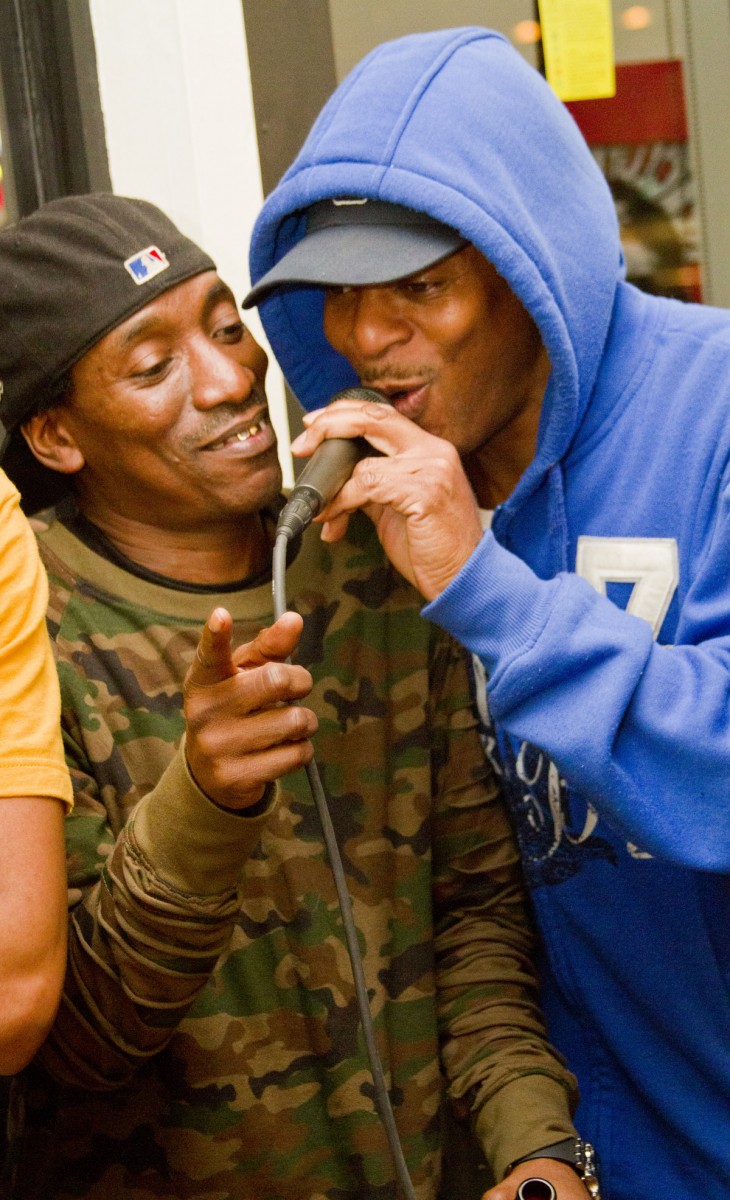 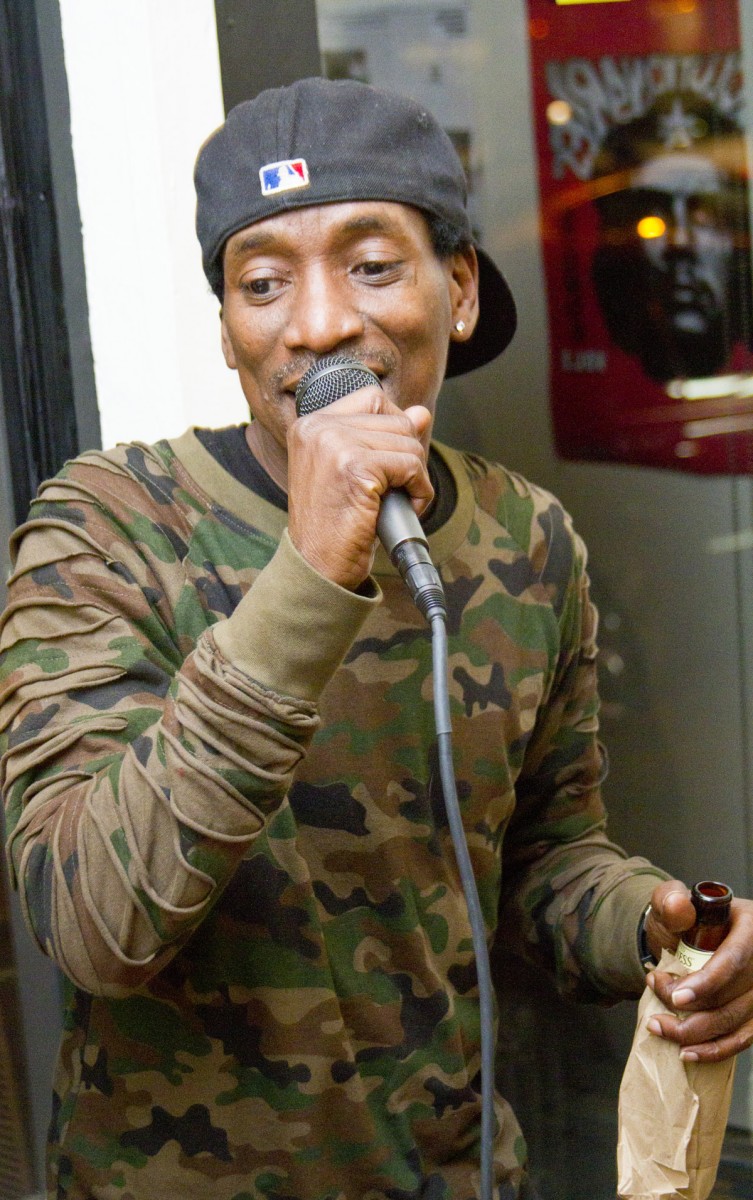 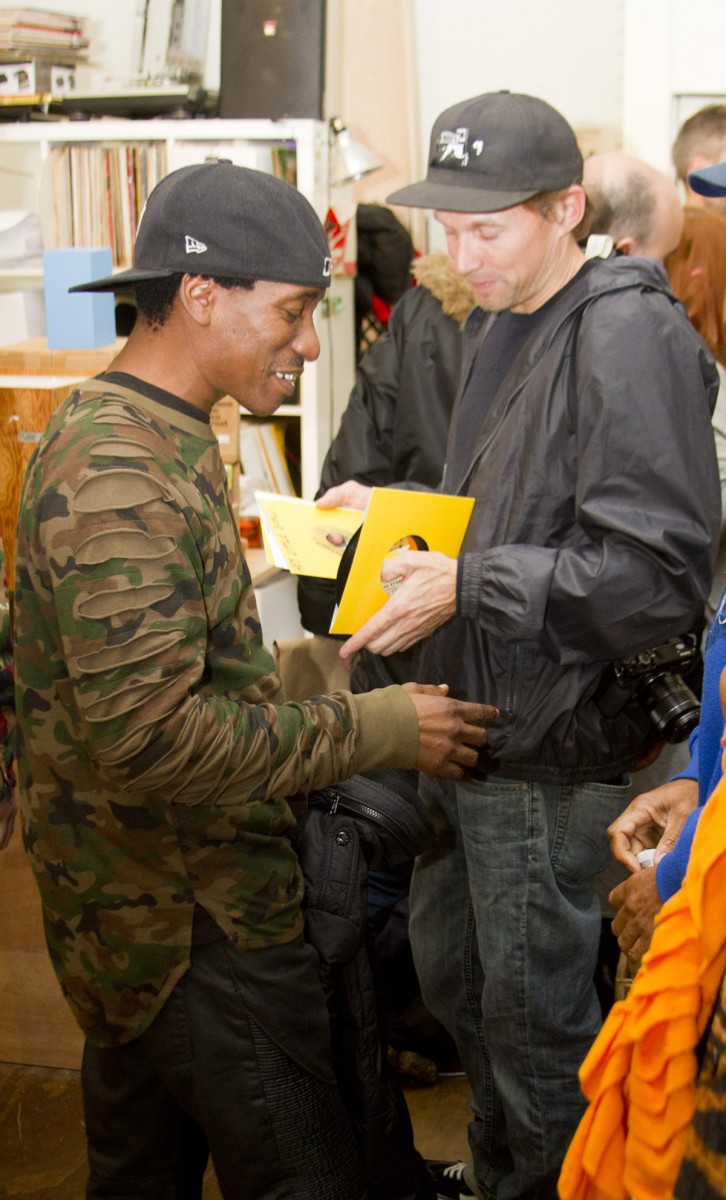 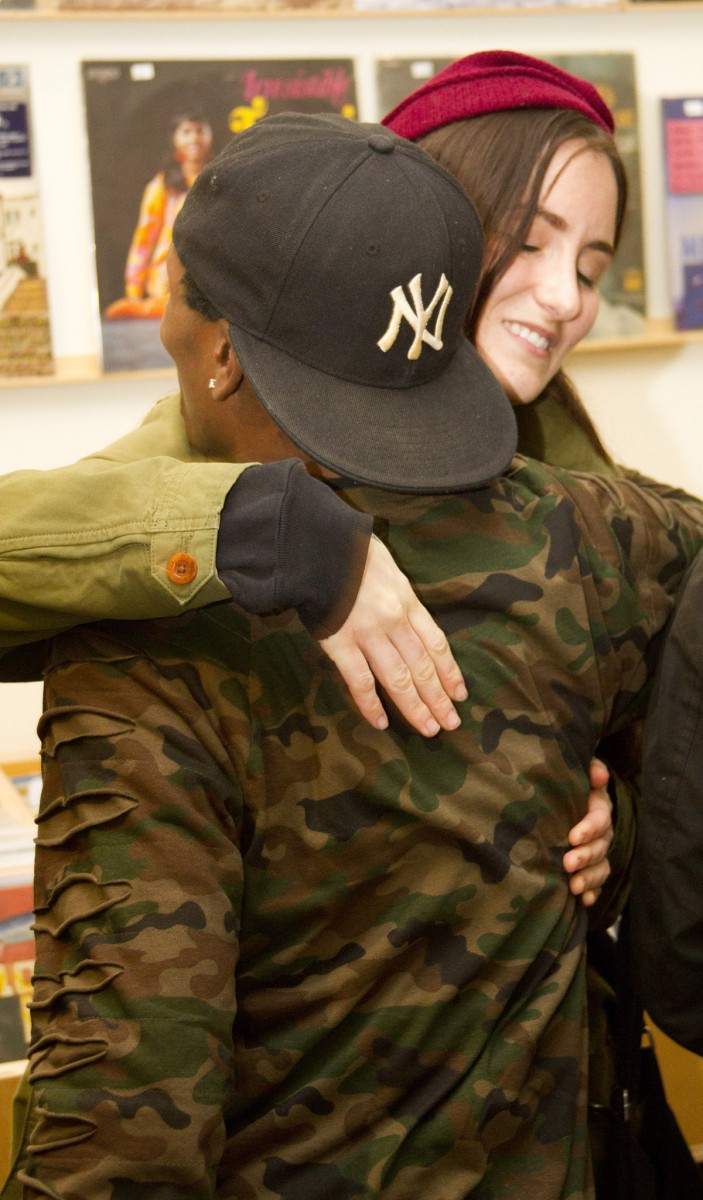 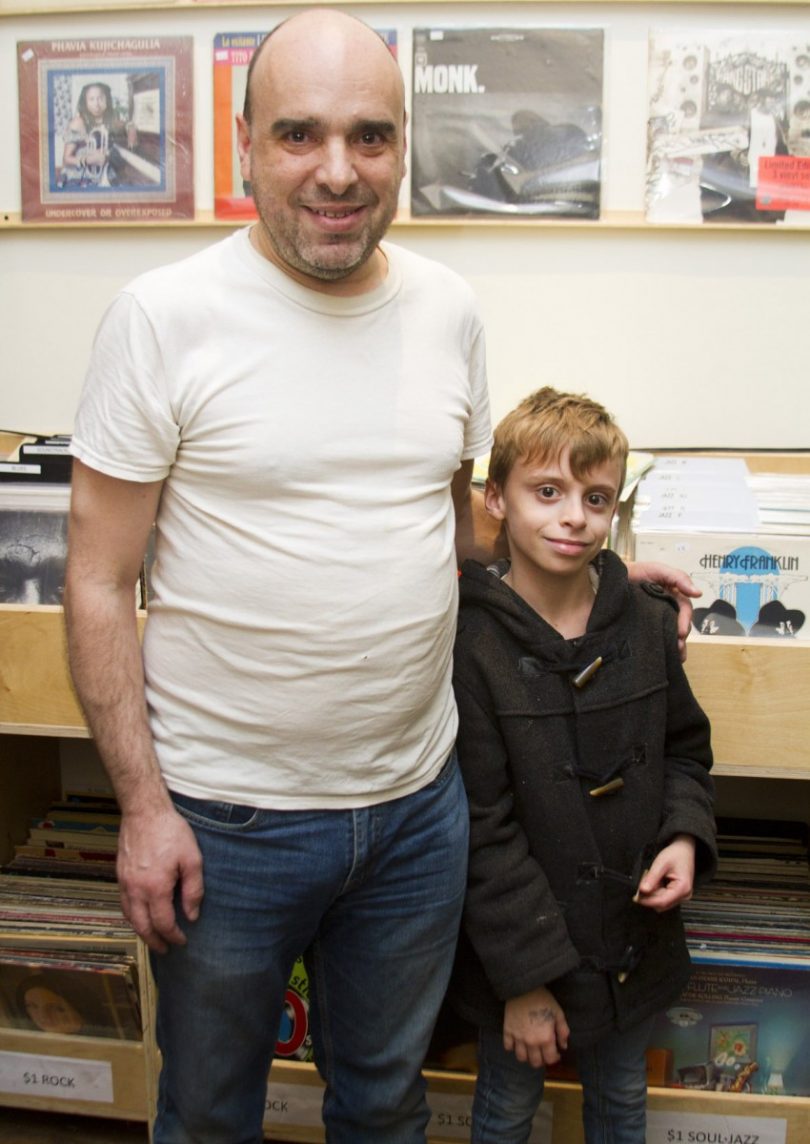 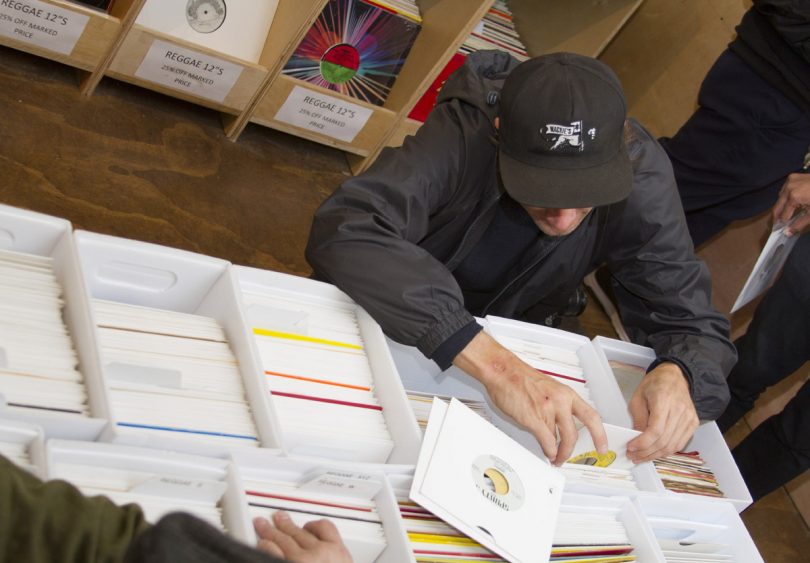 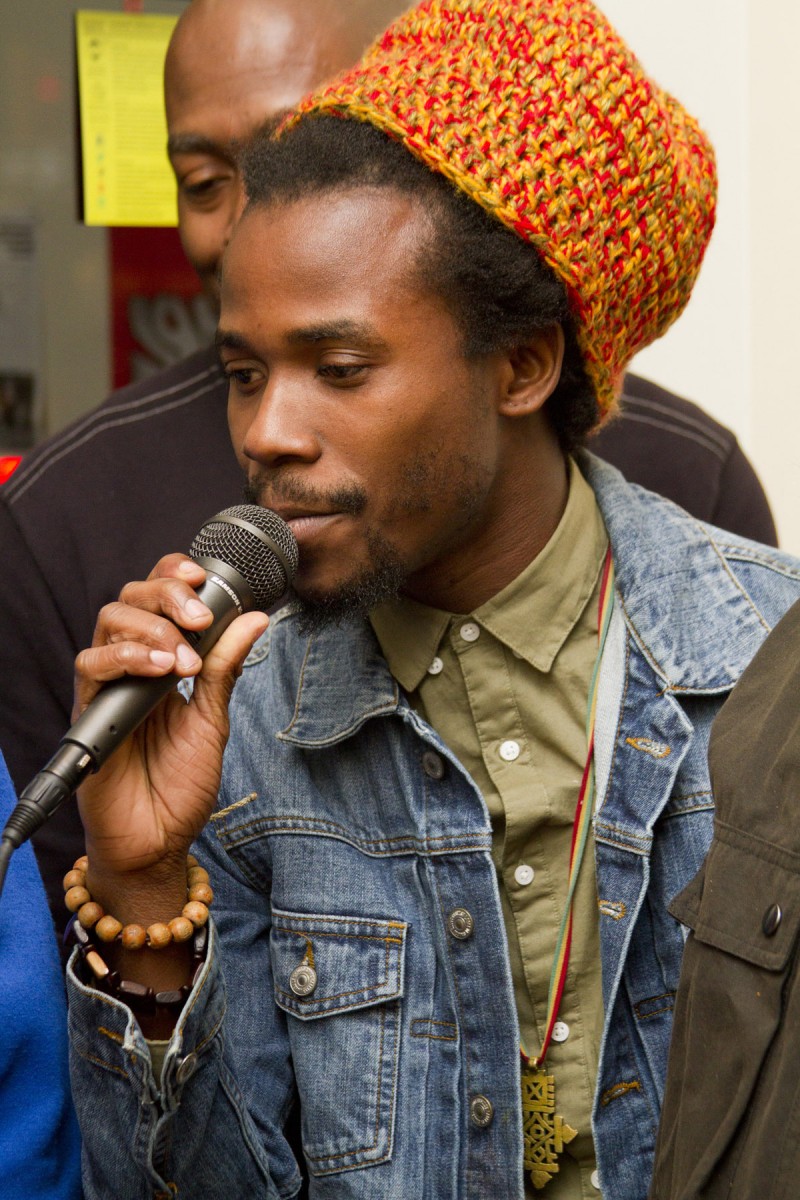 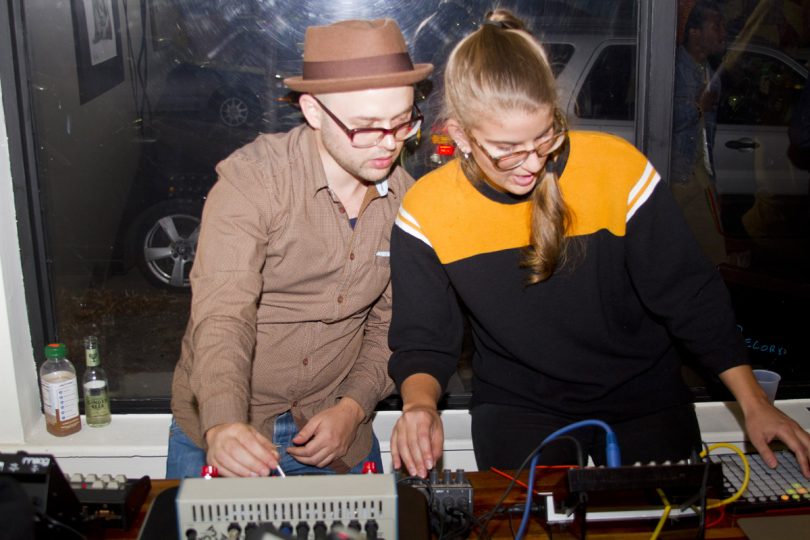 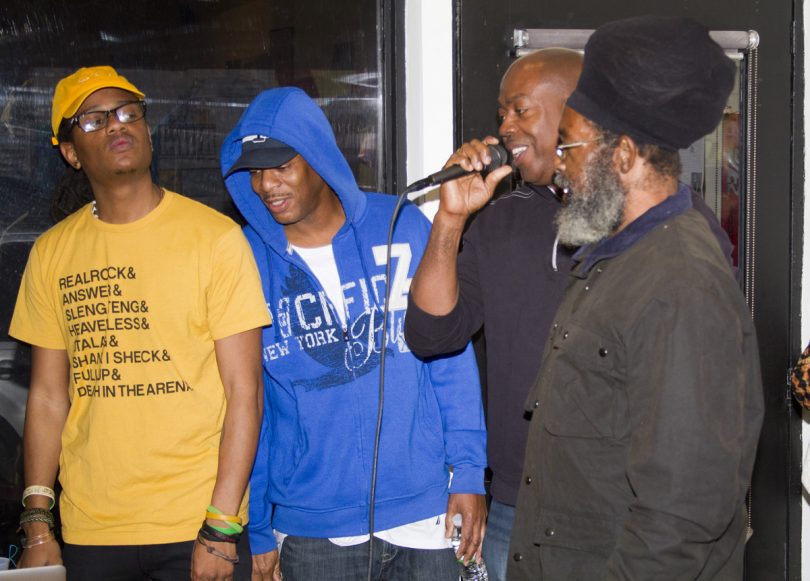 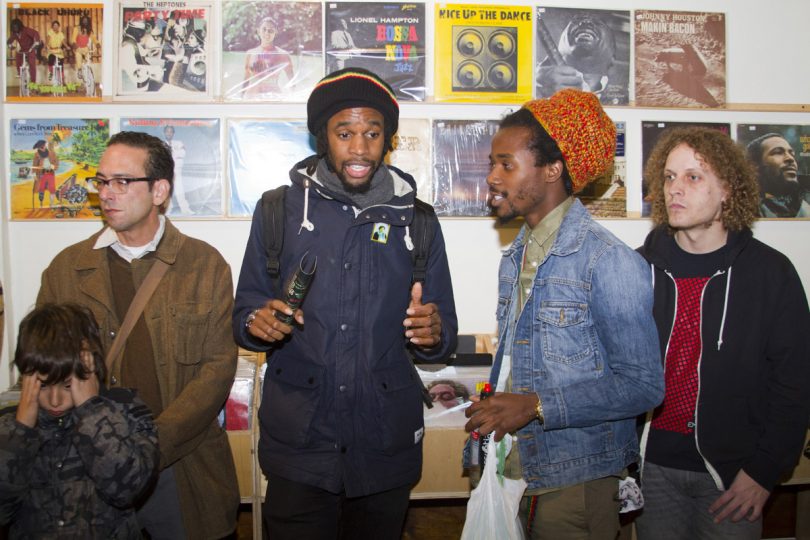 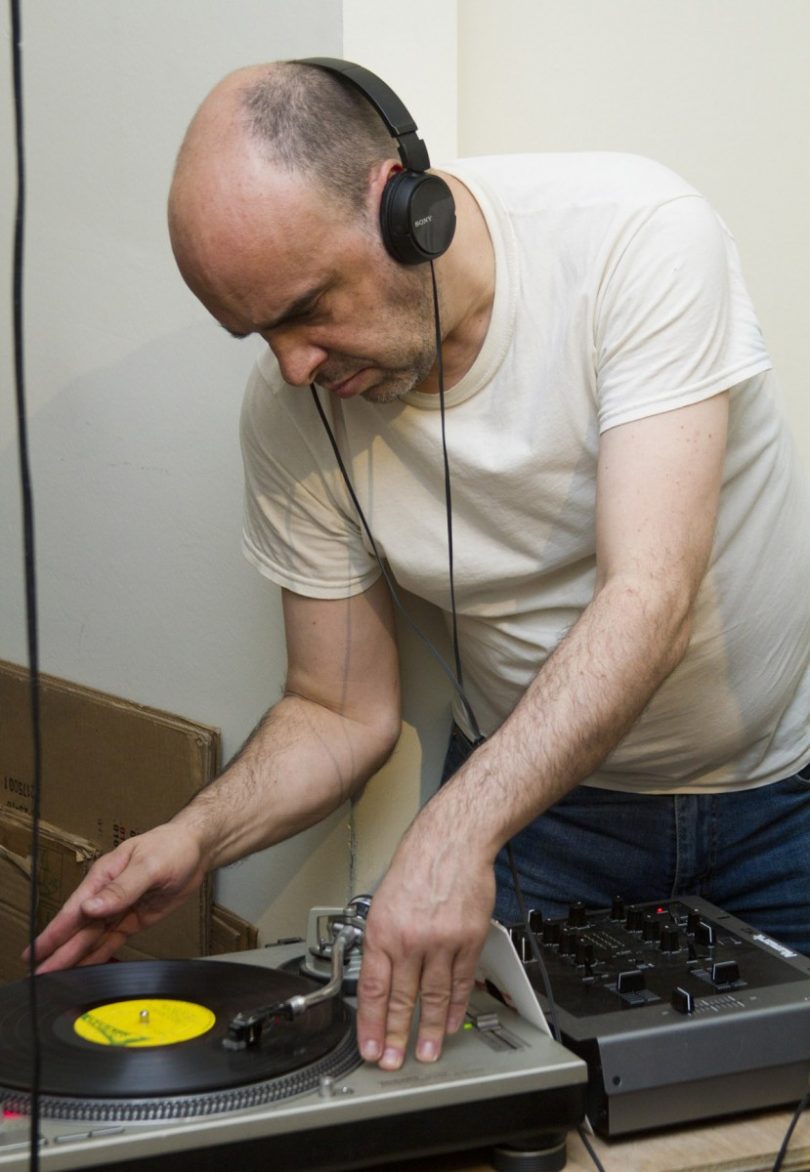 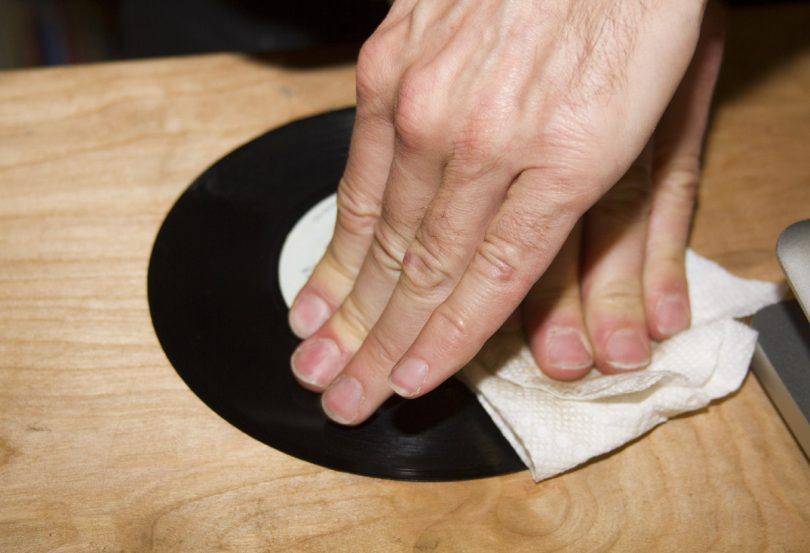 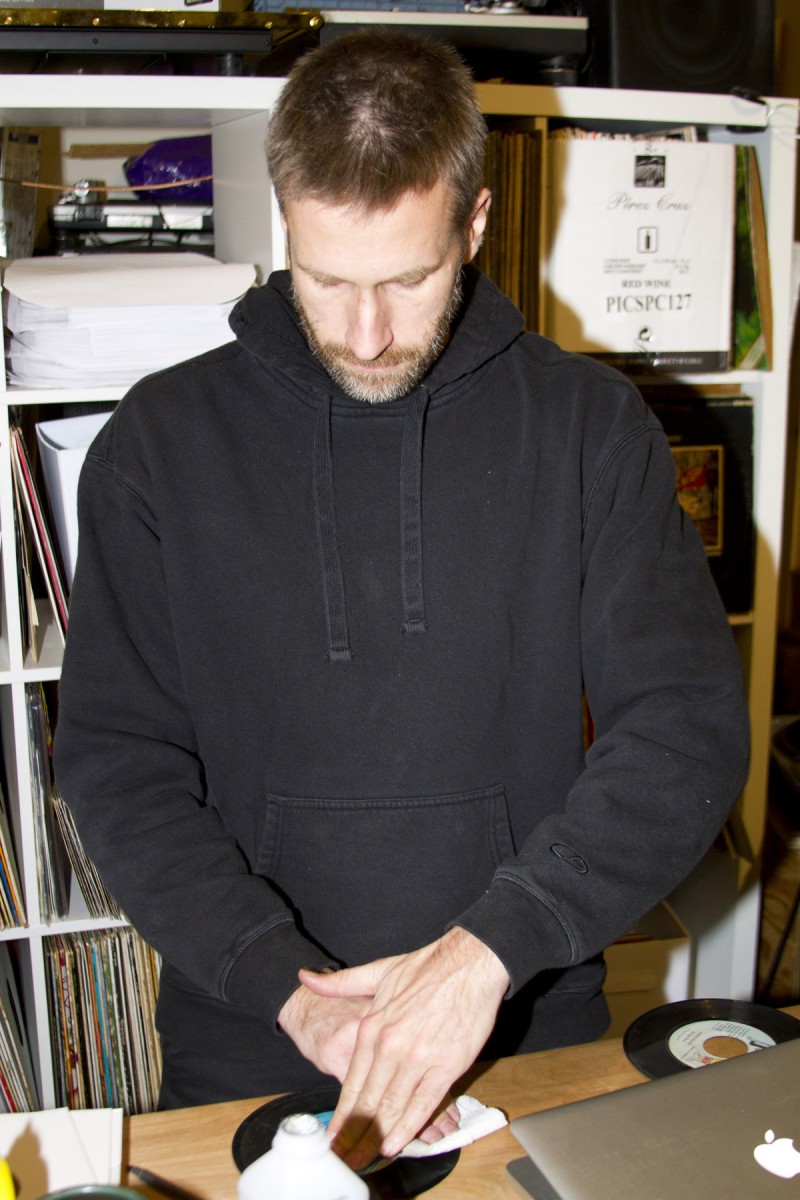 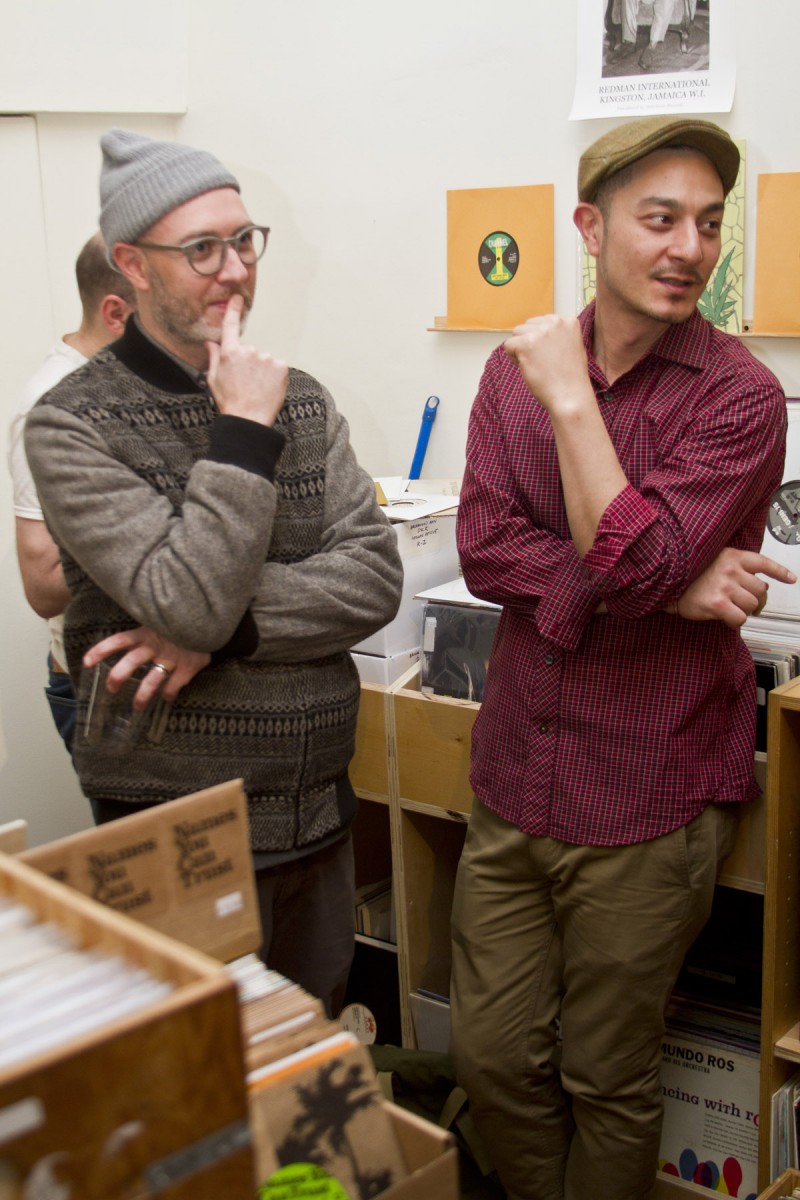 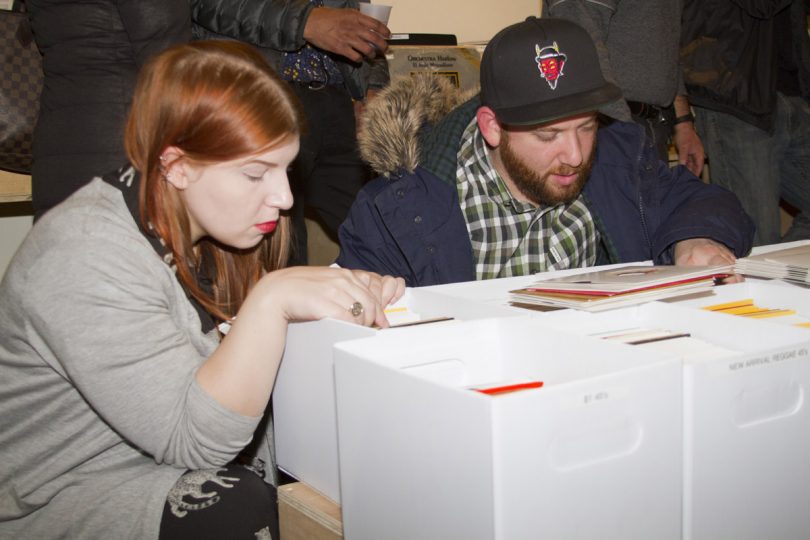 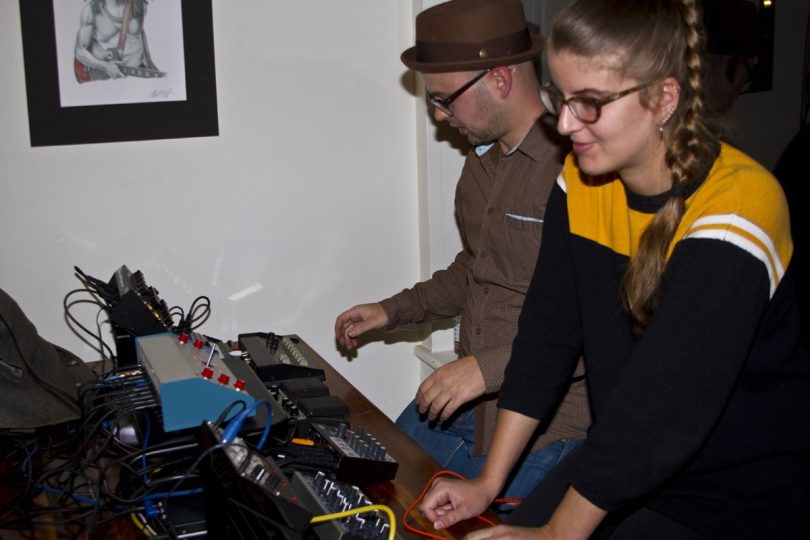 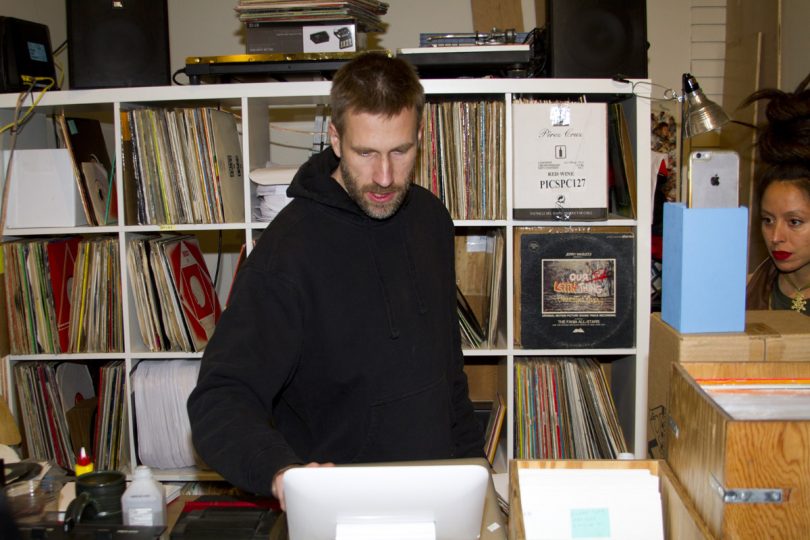 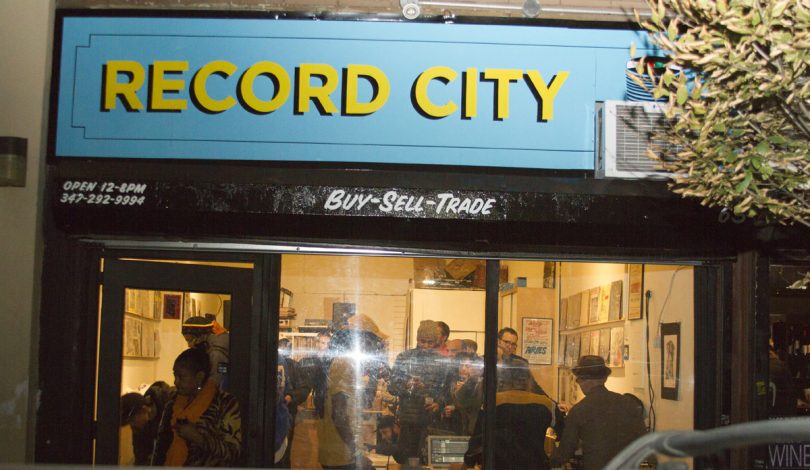