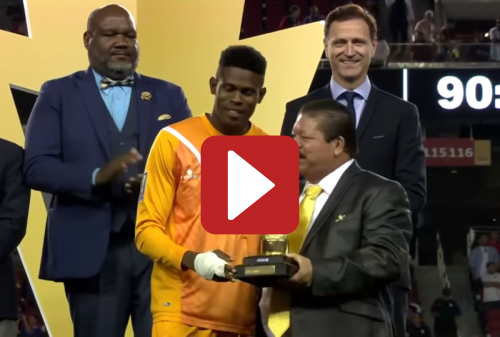 Blake’s injury happened during a double save on goal shots by USA football players Kellyn Acosta and Jozy Altidore. Immediately after those saves, he went down struggling in pain holding his fingers. After the match, Blake told Univision Deportes he had seven stitches on his wound.

The Jamaica Football Federation (JFF) released a statement saying the Blake suffered a finger injury. He received his award with a taped hand.
The well wishes from football fans worldwide on social media to Blake’s injury will certainly lift the spirits of the young star as he recovers.

In 2014 Andre Blake was selected by Philadelphia Union first overall in the MLS SuperDraft. Blake was included in the roster for the 2016 MLS All-Star Game.