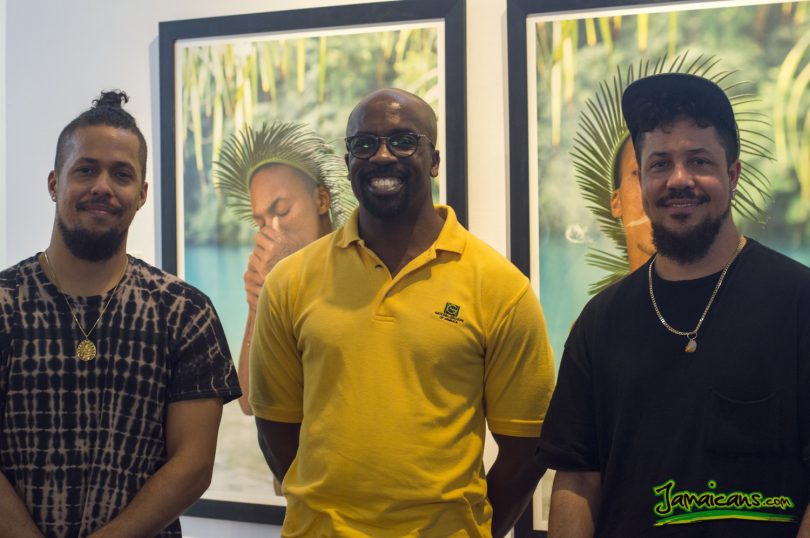 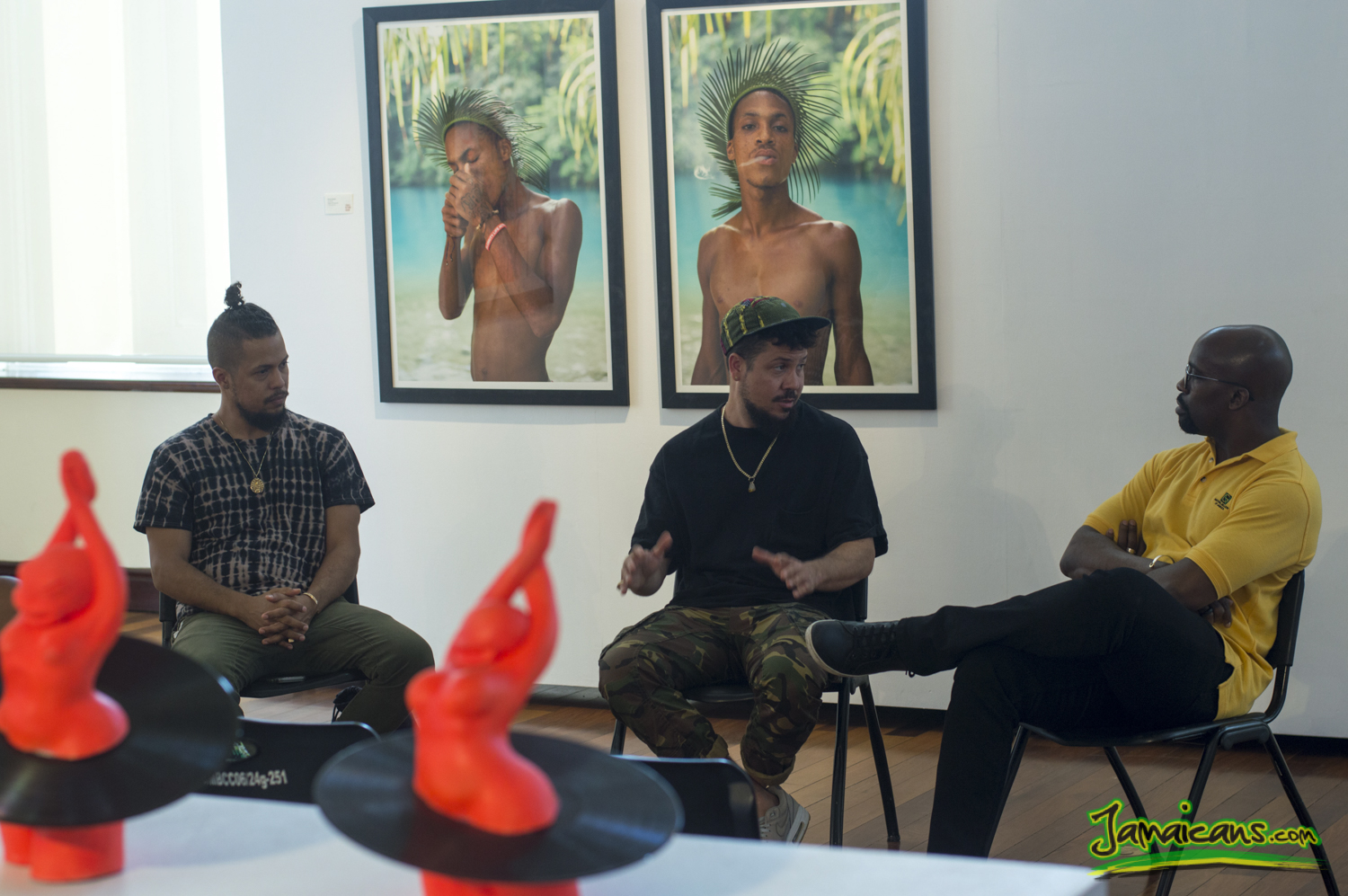 Sunlight spilled into the small gallery space at Montego Bay’s National Gallery West on January 12 as a group of people settled into chairs all facing the same direction. They had gathered on that Saturday afternoon to hear Storm Saulter and Nile Saulter speak as part of the promotion of the group exhibition, “I Shall Return Again.”

The inspiration behind the exhibition’s title is “I Shall Return,” a poem by globetrotting Jamaican author Claude McKay. All of the exhibiting artists: Monique Gilpin, Leasho Johnson, Cosmo Whyte, Storm Saulter, and Nile Saulter, are globetrotters themselves. They come from Western Jamaica and have lived and worked abroad. Their commuter relationship with the island has expanded their view and approach to new media.

Storm revealed that there is always a natural “undercurrent of something a little dark or cynical” in the work he creates, “It always comes through even when I’m trying to play with different things.”

He pointed to the contorted figure in his diptych “Shakespeare,” as an example of this unintentional curiosity. This led him to explain how the diptych came to be.

For the photographs in this exhibition, he said he has been pulling from his archives of behind-the-scenes moments and personal images to finally share with the public.

In “Shakespeare,” an image of a figure posed against a bright, blue, deteriorated concrete wall is presented next to an image of a graffitied rusting zinc fence. Storm stated that his consciousness of color and texture formed this pairing of photos from unrelated shoots. 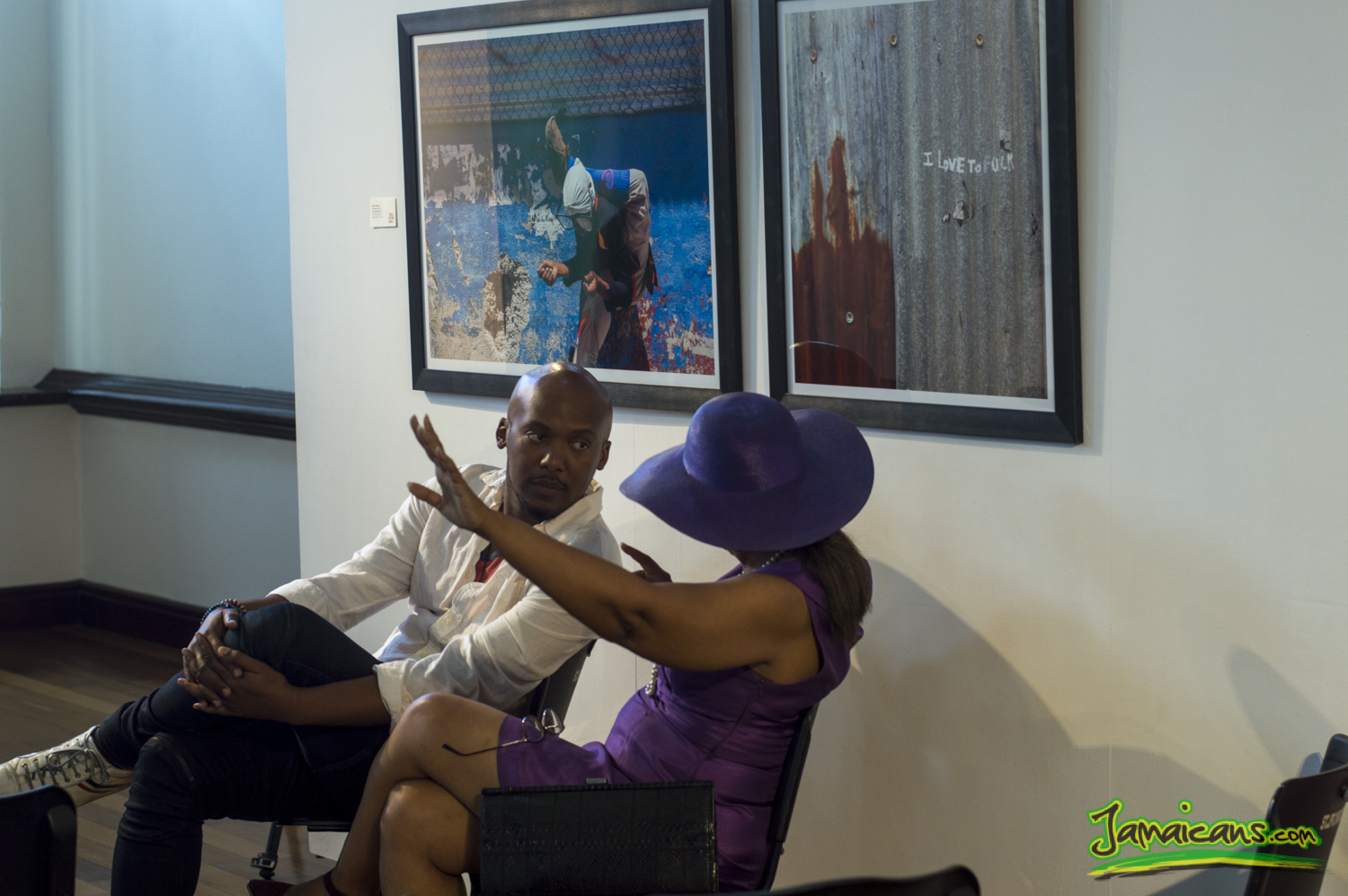 The conversation moved between the brothers as O’Neil offered both of them the spotlight.

Nile shared his experience with mentoring youths in Jamaica and how his students inspired “Hallelujah Wave”, the documentary video featured in the exhibition. He said he wanted to “take their energy and try and put it into a narrative using their sort of wild-eyed interest in different things which is why the documentary sort of approach made a lot of sense.”

He asked the students to focus on outliers of society, people who intrigue them, who they’ve heard about, but don’t actually know. They ended up creating a film about Revivalism and Surf Culture in Jamaica. Nile did most of the shooting however, he described it as a great collaborative process where the students suggested shots and learned to record sound and edit video.

O’Neil remarked that the film could help to overturn stereotypes and provide better understanding of the religious community and surfing community highlighted therein. 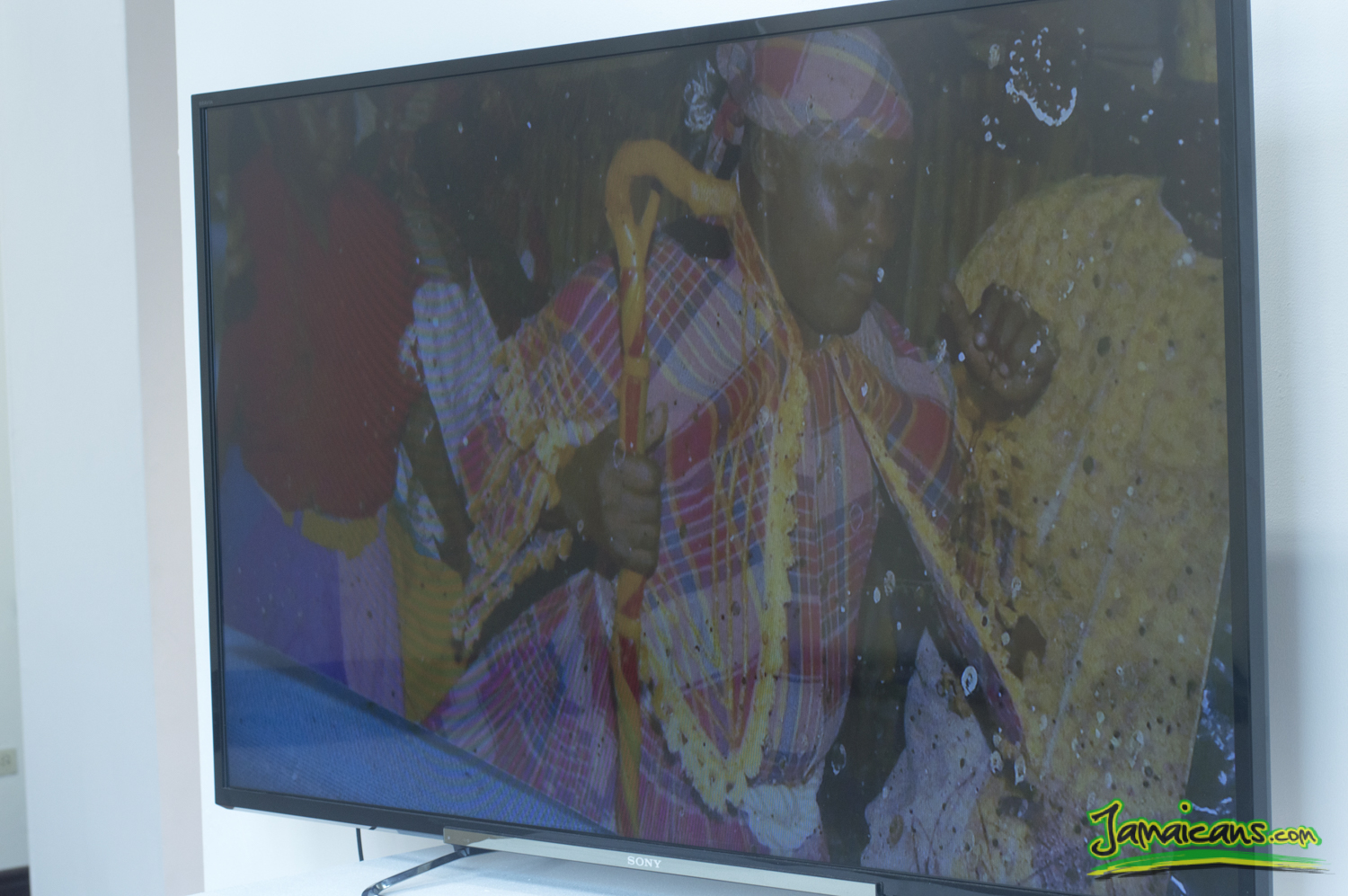 A scene from “Hallelujah Wave”

Storm and Nile mentioned the importance of communal and low-budget filmmaking. In earlier projects, they asked their friends in the industry to give them at least “a day for free [of working on a film].” Storm said “We trusted that enough people wanted to get involved that the money wasn’t going to stop [our creative movement].”

They also discussed working together as brothers and directors. Storm said that although they are on their own journeys, they had spent much of their formative years in filmmaking working together. The two often created projects together and exchanged information about material that inspired them. Today they will sometimes feature on each other’s sets and in cases when they are working separately, they provide each other with feedback.

O’Neil posed the question of whether the brothers believe there should be a separation between their commercial and personal work. They agreed that there can be a balance.

Storm affirmed that despite being widely known as a filmmaker, he is a multidisciplinary artist. He cited his beginnings in experimental video as evidence of this always being the case.

He referred to his photo archive once more. It includes snaps in-between takes on job sets as well as random textures which he has rearranged to create new storyboard-like narratives. The exhibited works are the first of more to come as he pushes himself more fervently as a fine artist.

Nile said his own personal challenge is to see if he can make work while out on assignment especially during travel. More traveling is on his agenda this year. “Going in and out of Jamaica” certainly helps with his creative energy. When he gets the chance, he looks for new environments and situations to capture.

Although he once dreamed of making a feature film at a young age, he is now more secure with prioritizing gaining experience. He can feel more confident about working within the framework of a film and under the restrictions of a budget as he gains more knowledge.

Nile expressed that “You know some things for sure, there’s a lot that you don’t know, but once you have the confidence to say ‘I’m gonna make something amazing out of this no matter what,’ that’s freeing.” 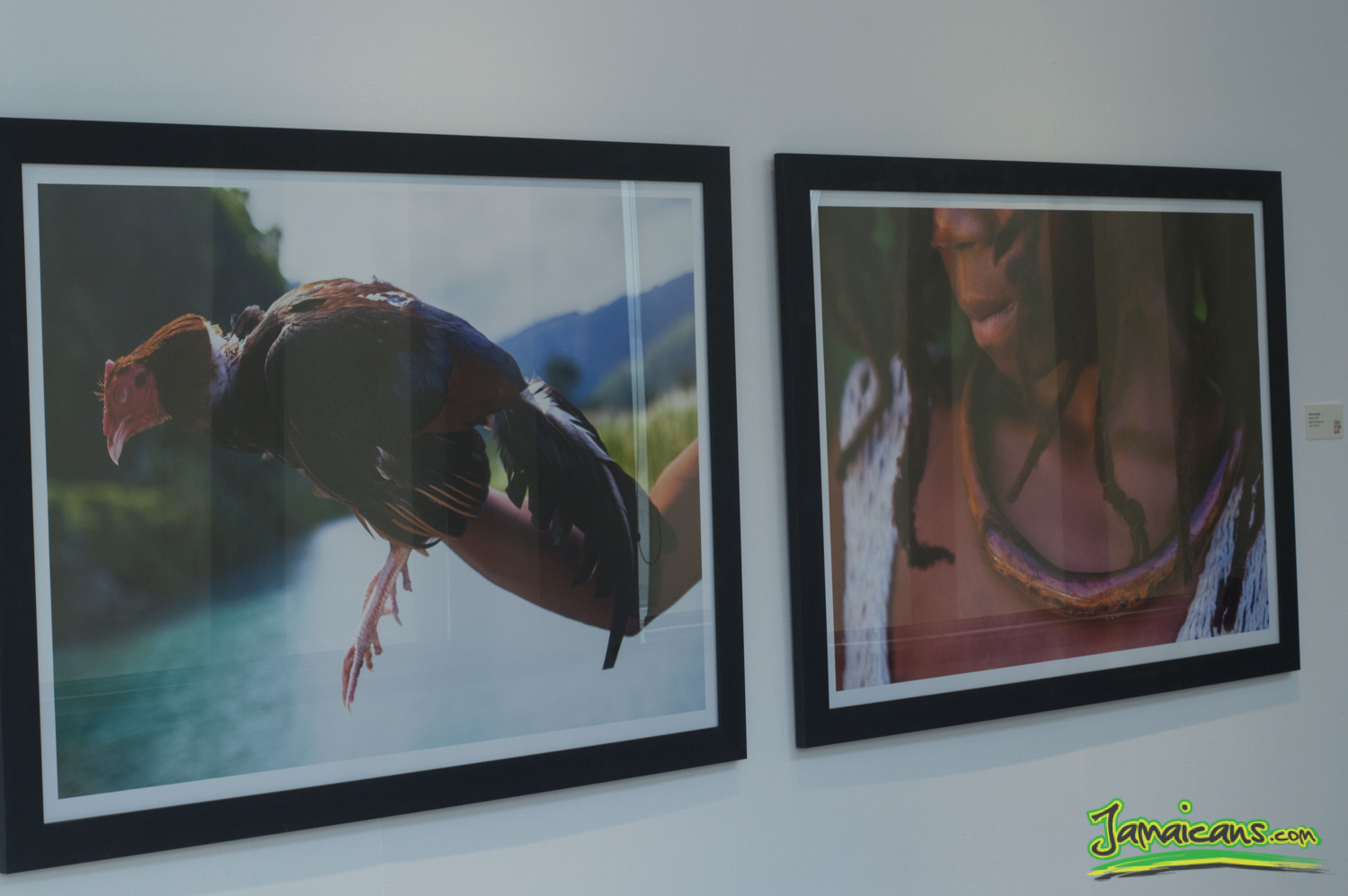 During the Q & A, Storm divulged that his recent film, “Sprinter,” which Nile also worked on, will be coming home to Jamaica some time this year.

The “Conversation with Nile Saulter & Storm Saulter” was an intimate gathering attended by friends, family, and supporters alike. With the opening of a new group exhibition, “Due West” on January 20 and an “Indie Film Night” event on January 27, the curators hope that more people will travel to National Gallery West to experience art in the second city. 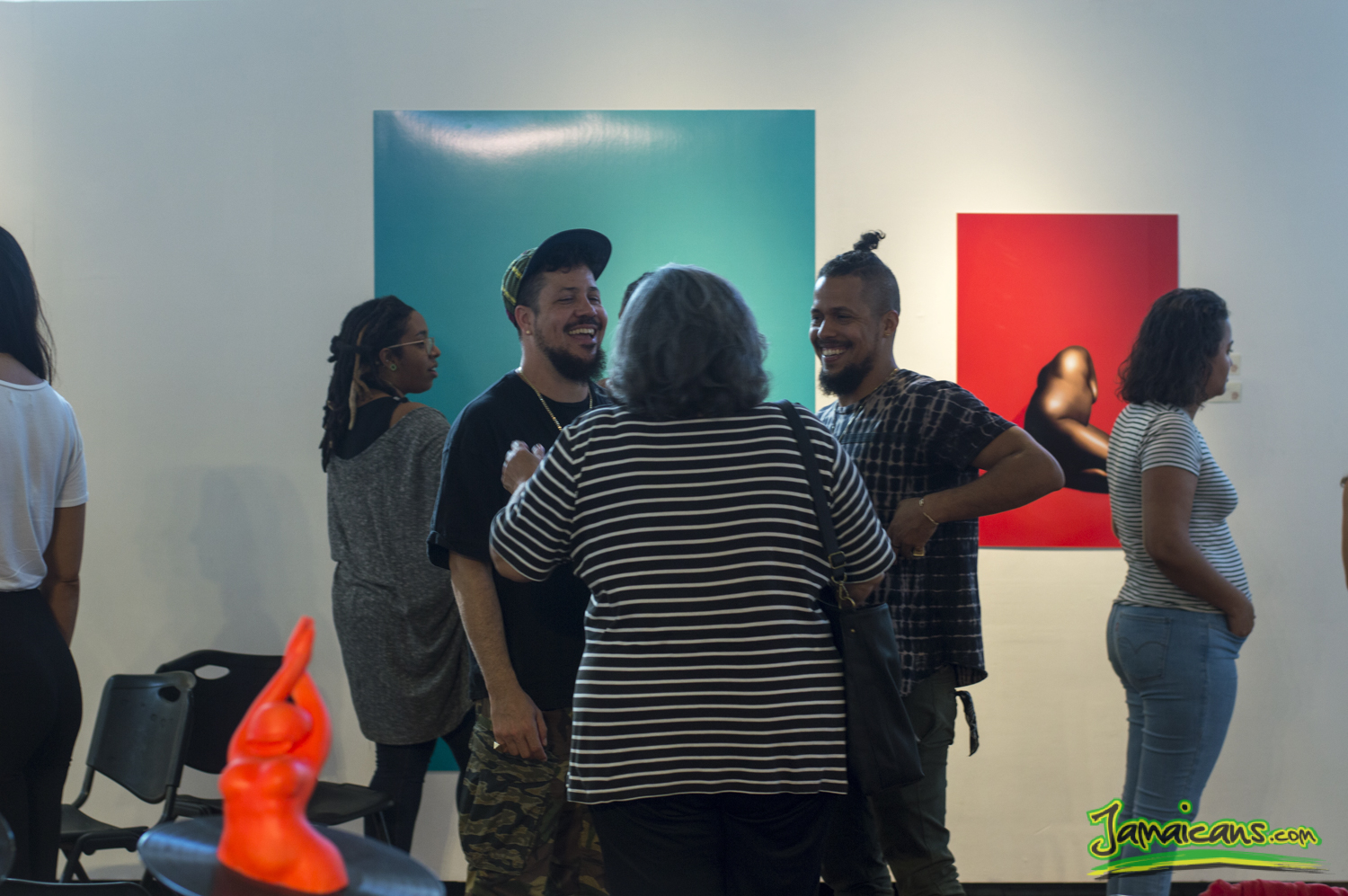