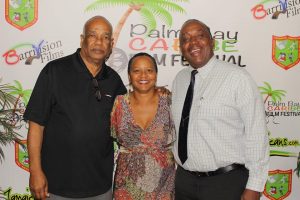 May 5, 2017, PALM BAY FL – The inaugural staging of the Palm Bay Caribe Film Festival scheduled for June in celebration of Caribbean American Heritage Month, was officially launched on Wednesday, May 3, 2017 at the Brevard Caribbean American Sports and Cultural Association (BCASCA) in Palm Bay.

The intimate event was attended by a cross section of the community eager to learn more about the mission and purpose of the festival which is billed as a cultural exchange. In his short address, BCASCA President Fitzroy Jones commented that festival will serve as a showcase of Caribbean talents in filmmaking as well as local talents in an effort to further the integration of and cooperation of the large Caribbean Diaspora and the native population.

Festival Co-Director, Judith Falloon-Reid of BarriVision Films expressed her excitement that the film festival by being Caribbean focused with local flair is a first of its kind in Palm Bay while also serving as a signature annual event for BCASCA. In giving her remarks she told the audience, “BCASCA has big plans for the area. One of the visions is to build a Caribbean center that will be the centerpiece of Caribbean heritage in the county. It will be the home to many wonderful events including, eventually, the Palm Bay
Caribe Film Festival.

The Palm Bay Caribe Film Festival which is scheduled for June 1 – 3, 2017 at BCASCA, will feature a Red Carpet opening event, 14 films of varying lengths, an Awards Show with renown Jamaican comedian Tony “Jamaican Paleface” Hendricks and South Florida Sax Player, Joseph Tapper as well as an After Parties. Among the films to be screened are Jamaican films Shoot the Girl and Silent Hearts; Trinidadian film Doubles with Slight Pepper; Hill and Gully and Provision by U.S. based Jamaican filmmakers, Tourments d’Amour from Guadeloupe and Auntie from Barbados. The line up of Caribbean films will be complemented by local films Blood Initiate and The Shardai Cousineau Story.