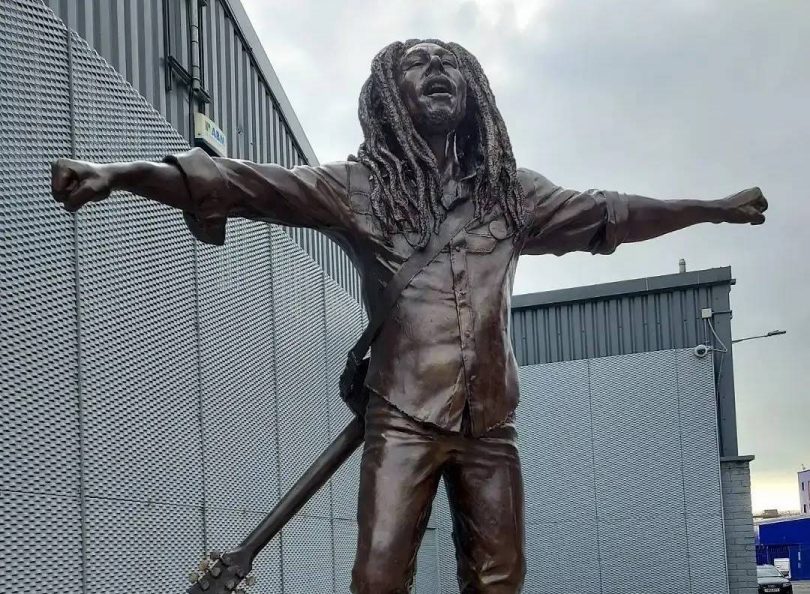 In the United Kingdom, Liverpool has become known for its many iconic statues in the city center. The statues honor musicians, football players, community heroes, and even politicians, and each statue has its own unique story. Now, a statue of Jamaican reggae legend Bob Marley will join the Liverpool artworks. The statue, which is located on Jamaica Street, is a seven-foot-tall, bronzed memorial of Marley commissioned by the Positive Vibration Festival and created by sculptor Andy Edwards. Marley is being honored for his messages of unity, love, and compassion.

Other musicians have been honored by Liverpool with a representative statue. The Beatles sculpture at Pier Head displays the Fab Four in an artwork unveiled by John Lennon’s sister Julia Baird on the 50th anniversary of the group’s last concert in their home city. At the installation, Baird noted, “It’s very apt that the Beatles are here. What have they done for Liverpool? What haven’t they done for Liverpool?!”

Beatle John Lennon has his own statue on Mathew Street outside the Cavern Club. It was inspired by Lennon’s solo album “Rock’n’Roll” of 1975 and displays the musicians in a leather jacket casually leaning against the wall. It is popular with tourists who often pose with it for photos. The bricks on which Lennon stands feature the names of other noteworthy bands and singers from Liverpool.

A life-sized statue of Cilla Black is also located on Mathew Street. It was unveiled in 2017, commissioned by her three sons to mark the time she spent working as a cloakroom girl at The Cavern before becoming a famous singer and television presenter.

Billy Fury is honored with a statue at the Royal Albert Dock overlooking the River Mersey. Fury was born Ronald Wycherley in 1940 and was famous in the 1950s and 1960s, becoming one of the most famous stars in the history of British rock and roll.

Not only real-life individuals are honored with a Liverpool statue. Eleanor Rigby, the subject of The Beatles’ song of the same name has a statute on Stanley Street. The statue features Eleanor and the pigeons she fed every day. It was designed to emphasize death and loneliness by entertainer Tommy Steele and includes a plaque reading, “Dedicated to All the Lonely People.” The bench next to Eleanor is large enough for someone to take a selfie. Peter Pan also has a statute. His is located in Sefton Park and was created by Sir George Frampton in 1928 as a gift to the children of Liverpool. At its unveiling, children were told Peter had “just flown in.” James Barrie, the author of “Peter Pan,” sent a telegram to Peter addressed to Sefton Park.

Liverpool has also honored a racehorse with a sculpture. Red Rum actually has two statues created in his honor – one at the Aintree racecourse and another in Southport, his hometown and the place he trained on the sands and in the seawater. Red Rum won the Grand National in 1973, 1974, and 1977; his three wins have been unmatched in the history of horse racing, and no horse has been as loved by the public as Red Rum. He died in 1995 at the age of 30, with news of his death announced in television news bulletins.