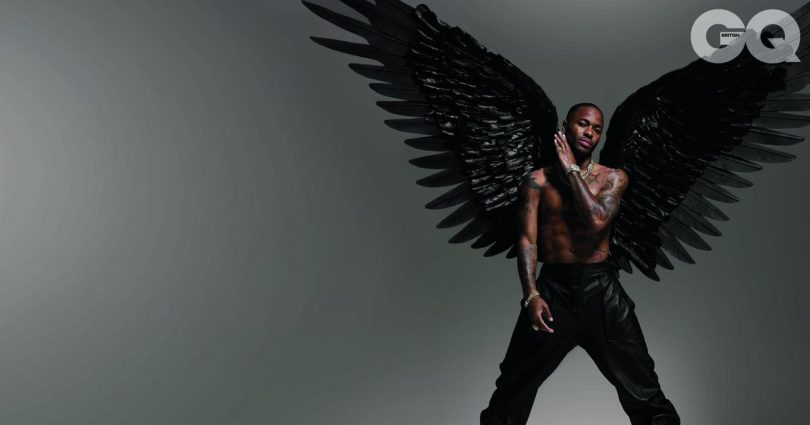 Fans of famous footballer, Raheem Sterling, will be happy to see their favorite player on the cover of the August 2019 British edition of “GQ” magazine. Adorned in a set of black wings, the edition includes an in-depth article about the many obstacles and challenges Sterling has faced on his rise to the top of his sport.

Born in Kingston, Jamaica, his father was murdered when Sterling was two years old. He and his mother immigrated to London when he was five. His football career was launched in Liverpool with the Queen’s Park Rangers and he debuted in Europe in 2012 and plays as a winger, attacking midfielder or striker. Sterling has been heavily criticized throughout his career for what pundits have perceived as greed, an attitude of entitlement, the flaunting of his wealth, along with an ego that doesn’t contribute to being a team player. It began with a contract dispute in 2015 and the player quickly lost favor in the public eye.

The athlete was arrested for assault on two different women, but found not guilty. He again received public disapproval after a photo of Sterling allegedly smoking a shisha pipe was published in “The Sun.” Sterling has also been the target of verbal and physical racially-motivated attacks and censure for a tattoo of an M16 rifle on his leg. His social media postings on racism ignited a firestorm of controversy, even while highlighting the problem on a broader scale.

He has since become one of the most influential footballers in the sport. He’s credited with being the individual to change the perception of young black footballers and has become an outspoken advocate of culturalism. Sterling has won a wide variety of trophies, medals and titles including the PFA Young Player of the Year Award, FWA Footballer of the Year Award, and The Integrity and Impact Award.

His appearance on the August cover of British “GQ” demonstrates a turnaround that he couldn’t have anticipated a few short years ago. Sterling has faced the challenges of racism and the court of public opinion, emerging on the other side as a champion of equality who is changing the way black players are viewed.