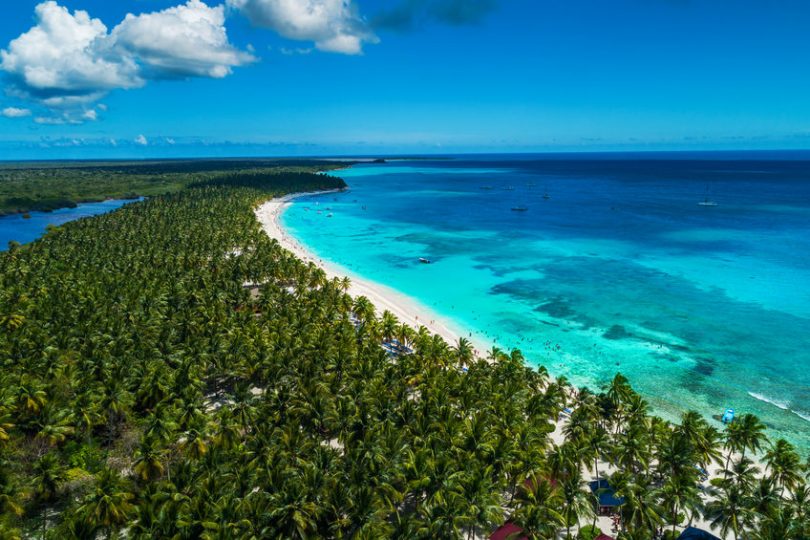 The Dominican Republic, a nation of beaches, waterfalls, deserts, and mountains, is located on the island of Hispaniola. It occupies the eastern part of the island, sharing it with Haiti to the west. Its capital city of Santo Domingo is the largest city in the Caribbean with a population of about three million people, and calls itself “the city that never sleeps.” The Dominican Republic has a diverse topography, and its climate differs over relatively short distances. Average temperatures can be in the low 60s in the mountains, while reaching the low 80s near sea level. Christopher Columbus reached the western part of Hispaniola in 1492; the Taino people had lived there since the 7th century. The island had the first permanent European settlement in the Americas. The Dominican people declared their independence from Spain in 1821. The country is known for its enthusiastic support of it skilled baseball teams and its major fashion industry. The birthplace of designer Oscar de la Renta, the Dominican Republic’s fashion week is the most important event of its kind in the Caribbean. Here are some things you must see on a visit to the Dominican Republic and some of the country’s unique foods to try.

7 Things to See in the Dominican Republic

1. Pay a Visit to Jarabacoa
This mountain resort area is easily accessed by travelers. It is located 1,735 feet above sea level and is popular with the residents of Santo Domingo due to its cool temperatures and panoramic views. Great for adventure-seekers as well, the area offers mountain biking, paragliding, and horseback riding. Jarabacoa also serves as the gateway to the highest mountain peak in the Caribbean, Pico Duarte, and large ranches cater to local and international visitors.

2. Watch the Birds
The country offers excellent locations for bird-watching:, one of which is Sierra de Bahoruco. This region offers visitors a chance to see birds that can only be found on the island of Hispaniola, including the Hispaniolan Emerald, Hispaniolan Trogon, and the Broad-billed Tody. There have also been sightings of a number of endangered birds like the Bay-Breasted Cuckoo, La Selle Thrush, and the Hispaniolan Crossbill. Thirty of the island’s 31 endemic species can be found in this amazing part of the Dominican Republic.

3. Take a Tour of the Laguna de Oviedo
Bookings for the three-hour tour of this very large lagoon must be made via the nation’s Ministry of Environment Information, but visitors will be rewarded by experiencing a salt-water lagoon with spectacular sightings of mangrove swamps, 26 keys in the lagoon’s center, and rare water birds. With over 40 islets serving as a refuge for wildlife in the lagoon, opportunities abound for seeing pelicans and pink flamingos. Cayo de las Iguanas is the home of the rhinoceros iguana and the ricord iguana.

4. Dig Deep at the Larimar Mines
This region in the Dominican Republic is the only place in the world where the semi-precious stone known as larimar is mined. Local miners endanger their lives for eight to nine hours each day to mine the blue stone, which is found some 700 feet deep in the mountains. Visitors can make explorations of the mines with local tour guides. They can also visit workshops where craftsmen cut and polish the stones.

5. Barahona
Located in the western part of the country, Barahona is known for its scenery, surfing, forests and biodiversity. One of the inland provinces of the Dominican Republic in an area covering about 3,000 square miles, it requires several days to explore in order to see its many attractions. The area can be reached by land, but charter flights are also available. The town of Barahona was established in 1802.  A municipality of Barahona Province, Polo, is famous for its high mountains and the coffee grown there. The town is also known for having El Polo Magnetico, the magnetic pole, on a mountain nearby. One of attractions of this area involves a type of optical illusion: if a car stops at just the right place and is put into neutral, it appears to roll up the hill. The interesting illusion is caused by the shape of the slope and its surrounding landscape.

6. See Santo Domingo
This city is the oldest in the New World, and it preserves its history and culture with passion. The historic Colonial City is a UNESCO World Heritage Site and features cobblestone streets, Spanish Colonial architecture, and very good restaurants. One of the most important sites in the area is the First Cathedral of America, which is the oldest cathedral that exists in the Americas. The Museum of the Royal Houses is located here, as is the Alcazar De Colón, which was built by the son of Christopher Columbus.

7. Play at Punta Cana
Located on the eastern tip of the country, this popular tourist area features numerous resorts. The town is famous for its beaches and its world-class golf courses. Zipline tours are offered at Scape Park, and visitors can take a dip in the waters of Hoyo Azul Lagoon. The fishing village of E Macao is popular for its quaint relaxing atmosphere, and its public beach is a favorite with surfers.

5 Things to Eat in the Dominican Republic Things to eat in Dominican Republic

1. Sancocho
This 7-Meat Stew has been called the “official” dish of the Dominican Republic. “Sancocho” refers to this meaty concoction that is found in several Latin American countries, but each country has its own version. In the Dominican Republic, Sancocho combines seven different types of meat for four types of animals and mixes them with root vegetables and plantain. This produces a very rich and thick dish that offers the flavor of the country.

2. Mangú
This dish, also known as Plantain Mash, is unique to the country and very popular with residents It consists of mashed plantains served with eggs, a fried Dominican type of “salami,” and fried cheese, or Queso Frito. When these three foods are served together, the dish is called Los Tres Golpas, The Three Strikes, and is served mainly at breakfast, although it may also appear on the dinner menu. The word “mangú” is believed to have an African origin.

3. Habichuelas Guisadas
This stewed bean dish offers an inexpensive source of protein as beans and pulse are common throughout Latin America and the Caribbean. This is a staple of the Dominican Republic and is often served with rice dishes. It is a traditional lunch meal. As with all popular dishes, every cook as a unique version.

4. Bizcocho Dominicano
This cake is one of the most popular foods in the Dominican Republic. It is the focus of many celebrations, including birthdays and weddings. Its buttery light texture and traditional pineapple filling is a hit with everyone who tries it.

5. Morir Soñando
While milk and oranges are not usually combined in a drink, this beverage is delicious and nutritious at the same time and is often served with sandwiches for a light meal. Its name can be translated as “to die dreaming,” which gives an indication of its deliciousness.