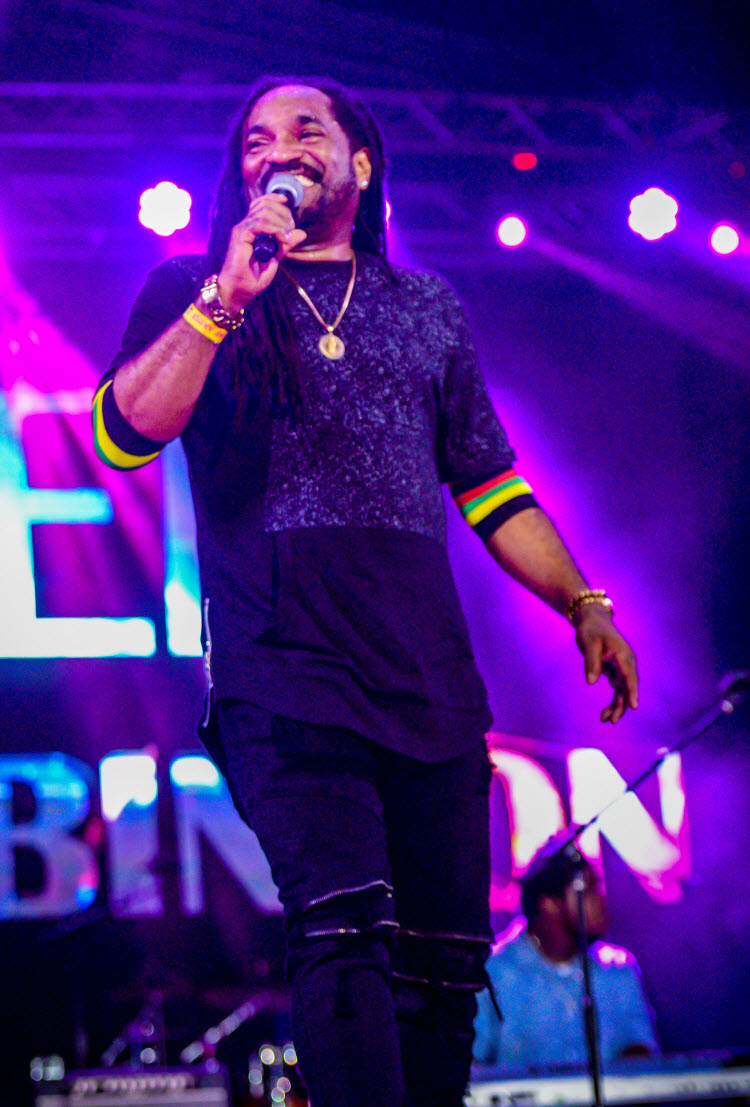 The sun opened heaven’s windows and peered through the clouds. Sleepily, it signaled its arrival to music lovers who celebrated the final moments of the closing of the 21st Anniversary of the St. Kitts Music Festival.

Sunrise on 25 June was at 5:35 a.m. and the show ended 6 minutes later. The sun slowly ascended the sky, as Jah Cure exited the stage. Sunrays kissed many sleepy faces leaving Warner Park Stadium. I smiled at the sun as I slowly walked along with my heartfelt memories.

The world class stage and lighting are gone. The stars are no longer on center stage and most artistes have already returned to their homeland. All we have are captured memories. I will highlight several artistes, but allow me to share my most profound memory, first.

Ed Robinson
Ed Robinson is the consummate performer and his stage presence is par excellence. At 12: 13 a.m. he appeared and his personality radiated from the stage. You felt the love from the onset.

Ed interacted with the audience, he is appreciative and notably thanked the organisers for inviting him. I have to highlight that he gave thanks and was the epitome of professionalism for some artistes like to drop the mike, forget which country they are in and are distastefully impolite. Ed’s personable touch fragrantly purified the stage.

His first rendition was “Ain’t That Loving You”, a Dennis Brown original. Ed sang, to the ladies, how he loved how they carried themselves, their hairstyles and mentioned the intricate details. There was an upsurge of energy from the crowd and I literally witnessed how women removed their invisible and uptight cloak from their shoulders and began to relax … and blush. Yes, there were blushing women for though the men at their sides may not have noticed their appearance, Ed surely did. Hearts melted and Ed enveloped us, tightly in his reggae cocoon.

His second rendition was “If I Follow My Heart”. Noticeably, St. Kitts’ tourism slogan is “Follow Your Heart” which was the main backdrop of the stage. A Trinidadian woman obeyed the slogan and thought it best to shout to Ed Robinson from the front row.

Some performers would have ignored her but not Ed. He was very attentive and engaged her. What was Ed’s reaction when she boldly disclosed how she was feeling? He ran across the stage away from the smiling and blushing woman. The crowd laughed as he illustrated that he usually would run away from certain women. It was a light moment and the energy was just right. Later he repositioned himself in front of the same lady, as he sang and she swayed euphorically. Her enraptured look surely illustrated where her heart truly was.

His other songs were, “No More Mr. Lonely”, “Rain from the sky”, “Purple Rain”, “Get Up Stand Up” a tribute to Peter Tosh, and “I Shot the Sheriff.”

Purple Rain was a tribute to Prince. The guitarist of the backing band, Vincent “Joffe” Payne band rendered a brilliant instrumental and I was enthralled as I absorbed it all in my purple apparel.

Ed took the time to mention that his backing band is from St. Kitts. He individually introduced the band members to the audience and reminded us that we must encourage and support our talented citizens.

When Ed sang “Get Up Stand Up” a light shower fell from the sky, like teardrops from heaven. It was 12:41 a.m. when the raindrops fell, then stopped midway through the song. It was so mystic that I pondered if it was sign and a few seconds later I realised the significance.

“Knocking on Heaven’s Door” was his last song and homage was paid to two citizens of the host country, Reggie Amory, and Leanna Napoleon. They are no longer on this earthly realm and their pictures were on the screen as he spoke to the audience.

Reggie was a businessman who passed away from a health issue. Reggie was also one of St. Kitts Music Festival photographers.

Leanna was a teenager who was missing for several weeks. Her body was discovered on 14th June, just 8 days before the Festival commenced. Her brother and two others have since been charged. Leanna’s death is not gun related, though gun crime is also a concern. As in every corner of the world, we too have our societal issues. What is very jarring about Leanna’s death is that brothers are usually protective of sisters, but in this instance Leanna’s brother and his friends are the accused.

The impact of seeing Leanna and Reggie’s picture? Personally, teardrops and it seemed like my heart had stopped. Before the song, I mentioned that the light shower seemed like a foretoken and it was. During his rendition of the song, there were many watery eyes. There was an emotive transformation and Ed caused citizens and individuals to reflect.

The impact of seeing Leanna’s picture, was like a needle prick but like an experienced tailor, Ed Robinson sewed the fabric of society with his thread of love. There are some things that are too heavy to face individually, but together we can help one another to do so. We embraced Ed’s admonition as he interweaved his music and message skillfully.

Some artistes don their performance cloak and leave their personality backstage. Many individuals come to the island, without knowing what’s really happening beyond the walls of the park’s venue. Even if they do, they do not care to comment, but Ed was quite outspoken about the matter. Ed’s presentation was truly authentic and it’s because it’s a reflection of himself. I had the privilege to meet him before that night and he has a magnanimous heart on and off the stage.

Ed slowly pulled off the temporary band aid we had placed on our numb hearts and encouraged us to openly grieve and begin the healing process.

His performance is what we needed: someone who could help us to understand that we can only heal when we face our reality. No sugarcoating, living in denial or sweep it under the red carpet, until the Festival was over, was the solution. He encouraged us to face the situation despite the pain. It gave many citizens the opportunity to release their pent-up emotions and frustration. It gave us an opportunity to collective and publicly grieve.

We sang “Knocking on Heaven’s Door” as Master Tailor Ed Robinson stitched our hearts and mended it with the healing power of love.

Ed is also a drummer and percussionist, a skill which he learnt as a youth in school. After his last song, he beat the drums. For me it was more than beating drums. Leanna’s death caused cardiac arrest. When Ed played the drums, it was like he resuscitated our hearts to start beating again. Ed beat for a new start, beat for Leanna, beat for healing, and beat for us to awake from our numbness.

His performance ended after 42 minutes and at 12:55 he exited the stage. Caribbean Vybes Magazine award for the artiste who brought an awareness, would be Ed Robinson.

There were 29 actual performers (duos and groups counted as one) and 2 did not come: Mighty Chalkdust and DJ Private Ryan.

On a personal note, when I penned the bios for the official Music Festival Magazine, I felt in my heart, that the person who would leave a deep-rooted “heartical” imprint would be Ed Robinson. Heartical if you are unfamiliar with the term means vibrational synergy of love, positivity, truth, and light. I was so convinced that I contacted his manager before they arrived on the island. There are individuals who may have thought otherwise but now agree that he did. Ed Robinson’s presentation is engrained in our hearts and minds, forever.

With esteem, we sing Ed’s song “Our Heroes” to him, for his courage and nobility has placed him as a champion in our eyes, for life.

Our heartfelt gratitude to you Ed Robinson for holding our hands, as we navigate our way on our healing journey as a nation. Thank you for giving us the opportunity to appreciate the simple things in life and also to cherish what is important, like hearing a heartbeat.