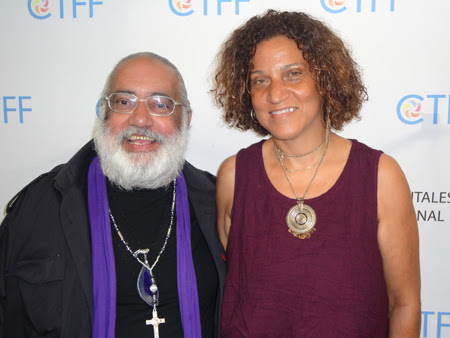 “CaribbeanTales continues to have its finger on the pulse of a dynamic movement of evolving film expression across the region and its Diaspora,” says founder and filmmaker Frances-Anne Solomon. “In just ten years, a very short period of time, our film stories have matured to become stunningly assured, explosive, transgressive, probing, beautiful and urgent. And this is what we see represented on screen in this year’s selections.”

Running from September 9 – 19 at the Royal Cinema, CTFF’s 10th anniversary edition will showcase a fantastic selection of Caribbean films from around the globe. These include 16 feature-length films and 30 short films in Official Competition for the CTFF Jury and Audience Awards, to be announced on the closing night – September 19.

intensive five-day Incubator Program for Caribbean and Diaspora filmmakers, followed by a Pitch Breakfast at the TIFF Bell Lightbox and many exciting networking events.

CTFF’s 2015 programming committee, consisting of movers and shakers from the Caribbean film community, has worked hard to put together a line-up that will surely WOW audiences. The festival’s uniquely themed Program consists of evenings of features and short films including Trini-to-the-Bone, a celebration of old and new Trinidad culture; Queer Caribbean, spotlighting new LGBTQ films; Shifting Perspectives, a partnership with the Rendezvous With Madness Film Festival, that focuses on mental health issues; After The Exodus, exploring themes of reparations, slavery and trafficking, and #AllBlackLivesMatter – Caribbean, that addresses in fiction and documentary the escalation of tensions between Haitians and Dominicans in the DR.

CTFF’s community partnerships this year include a special screening on August 19, of Spike Lee’s seminal work Do The Right Thing, co-presented with the Regent Park Film Festival.

The festival is also proud to partner with the Community Story Collective (CSC) to produce The Nine Night Party and Container Exhibit. This project is conceived as a tribute to Mervin Jarman, a well-loved Jamaican community art/activist who passed away suddenly in 2014. To commemorate, and continue Jarman’s work, the CSC in collaboration with CaribbeanTales, will hold a series of socially engaged art and media workshops in community spaces around the city.

“Mervin Jarman was the first Caribbean Diaspora artist that inspired me.” said Camille Turner, lead artist of the Nine Night Party and Container Exhibit. “I am thrilled to work with CaribbeanTales to create new opportunities for Diaspora artists to be inspired by Mervin, creating art and creating community.”

CTFF 2015 kicks off its 10th Anniversary with a Gala Caribbean Reception and Celebration on Wednesday September 9, in association with the Consulate General of the Republic of Trinidad & Tobago in Toronto, at the Royal Cinema, 608 College Street in Toronto.

The evening presents the Trinidad and Tobago feature docudrama PAN! Our Music Odyssey, by Jérôme Guiot & Thierry Teston, and written by Kim Johnson. A Trinidad & Tobago/France co-production, PAN! tells the story of the birth of the steel drum. Between 1939 and 1945, during World War II, while developed nations savaged one another on the world stage, in Trinidad & Tobago (the Caribbean) underprivileged urban gangs created a new and unique musical instrument, and perfected it by the 1950s. Pan was born!

From September 8 – 13, the festival hosts the 6th Annual CaribbeanTales Incubator Program (CTI), an internationally recognized platform that offers selected filmmakers the opportunity to hone their creative and business skills, through workshops and one‐on‐one mentorships with world-class specialists. CTI will culminate in The Big Pitch, when participants present their developed film projects to international funders and buyers over a delicious Caribbean breakfast at the TIFF Bell Lightbox.

The festival also organizes a number of intimate events providing opportunities for filmmakers and audiences to mingle informally with international industry players.Festival screenings will continue at The Royal Cinema, Monday – Friday, September 13 – 18 at 6:30 p.m. and 9:15 p.m. daily. On Closing Night, Saturday September 19, there will be three screenings at 3:50 p.m., 6:30 p.m. & 9:30 p.m.