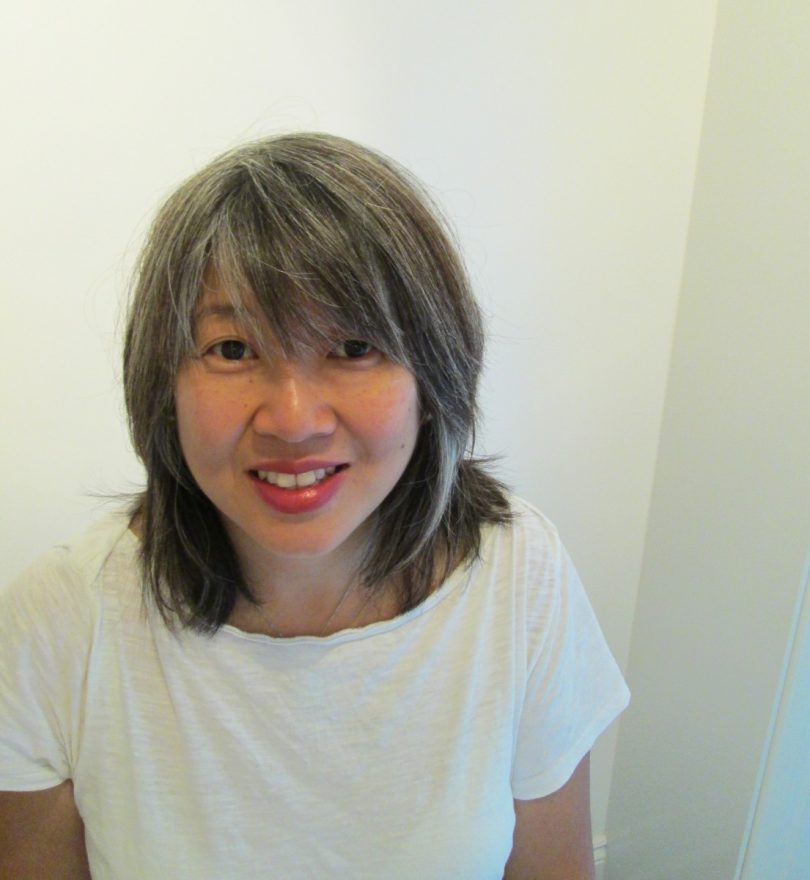 Jeanette Kong is a Jamaican-Chinese-Canadian documentary filmmaker based in Toronto, Canada.  Her feature directorial debut Finding Samuel Lowe won the Audience Choice Award at the ReelWorld Film Festival in Toronto and was shortlisted for Best Diaspora Documentary at the 2014 Africa Movie Academy Awards. Her short documentaries The Chiney Shop and Half: The Story of a Chinese-Jamaican Son both premiered in the Caribbean at the Trinidad & Tobago Film Festival. In 2014, the films were selected to commemorate the 160th Anniversary of the Arrival of the Chinese to Jamaica at the Institute of Jamaica.

1. Tell us about your background, your connection to Jamaica and how did you get started in filmmaking?
Jamaica is the land of my birth. I grew up in my family’s shop in downtown Kingston. I still have many vivid memories from my childhood, although we moved to Toronto when I was nine. In Canada, I studied Journalism and then worked in publishing before moving into TV.  I was a producer and director in arts programming at a public broadcaster. In 2009 I left my job to do a Master’s degree in Media Production. It was after that, that I decided to do my own film on “the Chiney shop” for an academic conference. I had years of experience as a producer and director, but it was telling a story that I wanted told, that was different.
2. Most of your films are focused on the Jamaican Chinese community. Apart from you being Jamaican Chinese what were some of the other reasons you wanted to focus on this community?
I would say from 1854 when the first Chinese arrived in Jamaica to the 1970s, most — probably 99% — were from three counties in the southern province of Guangdong. They were from the same Chinese cultural group called Hakka. My family is Hakka and I grew up in this community. Like many Jamaicans in the early 70s, many Chinese-Jamaicans immigrated abroad. As part of the large diaspora, I wanted to document a past that in many ways no longer exists. I wanted to capture this history for the generations born in other places that are becoming farther and farther removed from Jamaica and China. I’m aging myself, but I have two great-nieces and two great-nephews. I want them, their children and great-grandchildren to know where they came from. Vincent Lee and his daughter Chow Me Lee in Half: The Story of a Chinese-Jamaican Son. – photo credit: © Ms. Chin Productions

3. What are some of the things you have learned about the Chinese culture that many Jamaican would never realize. Tell us about your films?
I think that many Jamaicans though they shopped at Chinese-owned businesses didn’t know much about the shopkeepers that served them and where they came from in China. They didn’t know that they were Hakka and had their own cultural traditions and values. In The Chiney Shop, viewers hear about the Hakka as a cultural group. I also don’t think many Jamaicans realized how poor China was in the late 1800s up until the 1970s. Many Chinese men left there to work in shops so that they could help their families back home. Jamaica was seen as a land of opportunity and prosperity. This perspective is the same that Jamaicans had about working in England or Panama.
Another thing that many Jamaicans didn’t know is that the Chinese would send their children, usually eldest male children, to China to be educated. Many of these sons are of mixed heritage and they ended up in China from the late 1800s onwards. This is what happened to Vincent Lee in Half: The Story of a Chinese-Jamaican Son. In Finding Samuel Lowe, Samuel Lowe, a Chinese merchant, brought his children including a mixed-race daughter back to China. That daughter stayed, married and had children so there are Chinese with Jamaican or Caribbean heritage in their ancestry.
4. You have released three films so far. Each probably has some significance. Which one of the 3 films grew you the most as a filmmaker? As a Jamaican Chinese? As a Person?
Each film does have personal significance. This is a great question. As a filmmaker, I think I grew the most with Half: The Story of a Chinese-Jamaican Son. It was an intimate film in the sense that it was just me and Vincent Lee and his daughter Chow Me Lee. I didn’t have a crew. They had welcomed me into their home and I did everything — camera, audio, interviewing. It was simple and it worked. I think it would have been disruptive to have a crew with me. I also did a rough cut and then had a professional editor help with the fine cut. Although I did have some post-production help, I worked pretty independently. In TV and film, usually there’s a lot more collaboration. Going through this process really stretched me on the technical end, which helped me as a director.
I would say The Chiney Shop had the most impact on me as a Chinese-Jamaican. I wanted to do the film as a contrarian view as to how Chinese-Jamaicans were stereotyped and portrayed in mainstream Jamaican media. My impression growing up was that for the most part, my parents had very amiable relations with their customers. I think many shopkeepers had this kind of relationship with their customers. I also wanted to deconstruct the notion that these Chinese-owned businesses did not contribute to Jamaican society. Of course, I’m not dismissing the violent crime and the racism that we know exist, but I wanted to present another view that hadn’t really been explored before. I was fortunate to have many great Jamaicans who understood what I was trying to do including Joyce Gladwell, Olive Senior, Ray Chen, Alvin Curling, Carol Wong, Patrick Lee and Norman Hew Shue.
What Finding Samuel Lowe: From Harlem to China did for me personally was it reconnected me to China. The only time I had been previously was with my parents in 1996. We spent six weeks there. Although it had been a life-changing experience, I thought my connection to China would be lost forever after my parents died. I thought I would never go back. Through this documentary and the meeting of Paula Williams Madison who commissioned me to produce and direct the film, it allowed me to deepen my bonds with my own family in China and also forge new ties to her extended family. Since then, I’ve visited China four times and had wonderful experiences there. As a filmmaker, I really had carte blanche to do what I wanted. The editor Jane Macrae and I worked closely together to craft this moving story of this woman’s journey to reunite with her Chinese family. 5. What was your biggest challenge making documentary films?The biggest challenge is the whole thing! I’m joking, but not really. I use the analogy of having a baby. It takes a lot of time, energy, perseverance and care to birth a film. There’s also the issue of funding. The entire endeavour takes commitment and I often question whether I have it in me to do another. That’s the truth.
6. What you want the audiences to say after leaving your films?
I’m not sure how to answer this question. I just want to do justice to the subject matter. It’s an honour and a privilege when people trust you to tell their story. There’s an enormous responsibility for the filmmaker. At the same time, you’re crafting a story that you hope will resonate with the audience, that they’ll engage with it and ultimately be moved by it.
7. What is your next project?
My father kept a journal when he left China to return to Jamaica in 1949. Back then, he had to travel by sea. He got the last US transport ship out of Hong Kong before the Communists declared victory in China. He stopped in Yokohama, Honolulu before docking in San Francisco. He was at sea for two weeks. He then had to take a train across the United States to Miami. In Miami, he finally boarded a Pan Am flight to Kingston. An uncle had paid for my Dad’s travel to Jamaica.  In return my father worked in the relative’s store for five years to repay his passage expenses. Some older Jamaicans may remember the store. It was Kong Brothers at Cross Roads. My Dad was typical of the men of his generation so I believe my Dad’s story is reflective of many Chinese men who migrated to Jamaica to work in shops. Many settled there, got married (or not) and had children. They contributed to the “out of many, one people” motto of Jamaica. In the film I’m developing, I hope to give some context through my father’s personal story why these men wanted to leave China and why they moved to Jamaica and the impact it had on the family they left behind and the children they raised in Jamaica.
8. What advice do you have for young filmmakers?
Often when someone wants to be a writer, the common advice is “to write what you know.” I think this advice also can apply to filmmakers. What I mean by this is to do a film on something that matters a great deal to the filmmaker. A subject close to one’s heart. Something one feels passionate about. A story that has to be told. If it’s something meaningful then the filmmaker will have something to say. It’s important to develop a creative voice.
9. Your favorite Jamaican food is…?
There are so many (laughs). I just can’t choose one so I’m going to give you my top five: Mackerel and rundown (must have boiled green bananas), Fried snapper and bammy (especially from Hellshire Beach), Fried Chicken and Rice and Peas, Pumpkin soup with salt beef, and Cornmeal pudding (with raisins).
10. Seven day, six night, all expense paid, my vacation destination is…
Hawaii … definitely. I visited once and would love to see more of the islands.

11. Thanks for the interview any closing thoughts for visitors to Jamaicans.com
You’re most welcome. It was a pleasure. Closing thoughts: Walk good and do good! Words to live by.

Find out about Jeanette Kong’s latest projects by visiting her website or Facebook page.
Be sure to check the trailers for her documentaries as well:
– The Chiney Shop
– Half: The Story of a Chinese-Jamaican Son
– Finding Samuel Lowe: From Harlem to China