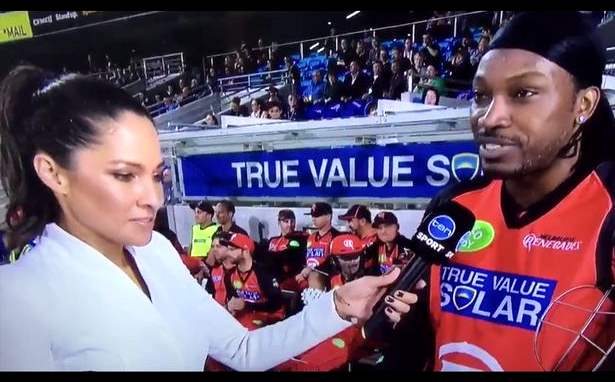 Former West Indies team captain Chris Gayle must pay a fine for making inappropriate comments to a television reporter during a live interview at the Big Bash League Twenty20 match in Melbourne, Australia. Following a Melbourne Renegades victory over the Hobart Hurricanes, Gayle suggested to reporter Mel McLaughlin, that he and she go out for a drink, making comments about her appearance, and saying “Don’t blush, baby” at one awkward moment during the interview. James Sutherland, chief executive of Cricket Australia, criticized Gayle’s comments, stating that the exchange bordered on harassment and that it was completely inappropriate for the workplace. Stuart Coventry, the chief executive of the Renegades, decided not to suspend Gayle for his behavior, but imposed a fine of $A10,000 on the player.