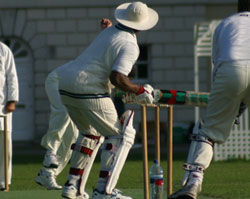 Cricket in Jamaica is a vestige of British colonialism. In the past, cricket was considered a sport played by the elite, with the very British game first played in Jamaica only by the upper classes. Today, the rules of the game – technical and social – remain in force: teams are divided into “gentlemen” and “players,” with each having its own locker room. Until recently, only “gentlemen” could captain a team. “Players” were paid to play.

The antiquated social structure of the game shows haw the appearance of propriety and manners remain critical to the game, and cricket, unlike football, was a game that exemplified English reserve. Over time, however, Jamaicans from all social backgrounds began to play the game, and today, it is thriving throughout the Caribbean at all socio-economic levels.

It was once the most popular sport on the island, and for years, the West Indies cricket team was the best in the world, Jamaica has produced many of the world’s best cricketeers.

Sabina Park in Kingston is one of the largest and best known cricket stadiums in the Caribbean, seating 12,000 individuals. A popular spectator sport, matches consistently draw large audiences who come to cheer their favorite teams and boo their opponents.

Cricket is played with a ball and bat, but is very different from baseball. Only three men in the field wear gloves, and the bat is considerably smaller than a baseball bat. A test match is played over five days, with each round lasting about seven hours – an endurance test for both players and fans.

Only one team represents the West Indies in international competition. This team began playing in 1928. In 1935, the team won the first test series. The biggest change in the game occurred in 1950 when the team won a series victory and started to play all over the world. From the 1960s to the 1980s, the West Indies team was the leader in the world cricket. Cricket continues to be popular with Jamaicans and is taken very seriously by its fan.