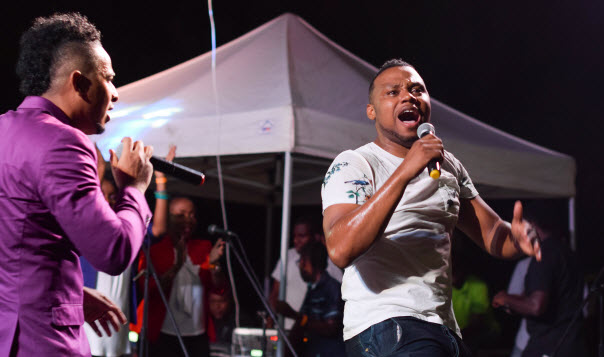 Christian artiste DJ Nicholas can sing additional praises as his prayers for a successful album launch and concert was definitely answered last Friday at the Ranny Williams Entertainment Centre.

The artiste, who officially launched his fourth studio album ‘The Audiologist’ at the LIVE performance event, saw a full house in attendance to worship and celebrate with him.

“People had so many options last Friday but they chose to support my album launch in Jamaica and this was an ultimate success by the grace of God. I’m excited about the response to ‘The Audiologist’ album thus far and look forward to sharing these messages around the world God willing” Nicholas shared

The large crowd waited patiently for the main act, DJ Nicholas, who took the stage at 10pm and offered renditions of his hits including ‘Divine mathematics’ and ‘One Less’ after which he was joined on stage by Jermaine Edwards to perform their collaboration ‘Trust me’ which is also featured on ‘The Audiologist’ album.

The special guest performer for the night, American Gospel musician Todd Dulaney, was also well received; he blessed the stage with some of his known songs as well as his major single ‘Victory Belongs to Jesus’ which literally brought him to tears.

DJ Nicholas and Dulaney also performed their collaboration ‘You Make me Wanna’ as the finale to an excellent showcase.

‘The Audiologist’ album is now officially available for purchase on digital platforms including I Tunes with physical copies at select locations islandwide.

DJ Nicholas can be seen performing next at GoSplash on Emancipation Day, August 1 in Portmore St Catherine.