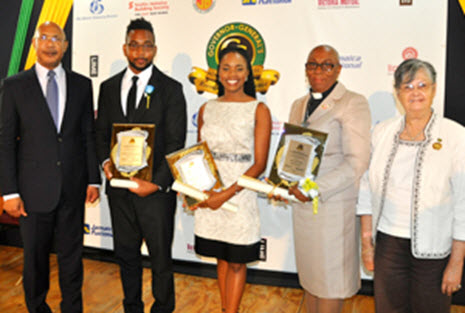 The Jamaica Cultural Development Commission’s Miss Jamaica Festival Queen 2015, Chereese Ricketts was among 14 persons who received the prestigious Governor General Achievement Award for Excellence for the county of Middlesex in a ceremony held at the Wembley Centre for Excellence in Hayes, Clarendon recently.

In his remarks at the ceremony held on Thursday, August 27, the Governor General of Jamaica, Sir Patrick Allen stated, “It is very refreshing to have you here to celebrate what is right with Jamaica,” he continued “The individual achievement of each of you being honoured underscores the relevance of the 2015 GGAA theme: Values through Volunteerism: Impacting Communities One Community at a time.”
Ricketts received the award for her community building work  in the parish of Manchester, where she serves her community as a dance instructor at the Ebenezer Home for the mentally challenged; and is also the host of SPEAK, a spoken word initiative, held for young people in Mandeville.
Ricketts also recently founded eMotion Movement, which aims to encourage Jamaicans to acknowledge and pursue mental well-being, by partaking in physical activities.

“Receiving this award gives me impetus to continue as best as possible and to make sure I am doing it excellently; and I hope it will give people credence as to what I am doing, so they will say ‘let’s rally behind her and support her’” she continued.

The Governor General Achievement Award for Excellence Award recipients from Middlesex hail  from the parishes of Manchester, St. Ann, St. Catherine and Clarendon and have done exceptional work in building their communities, exemplifying good moral character and educational attainment.