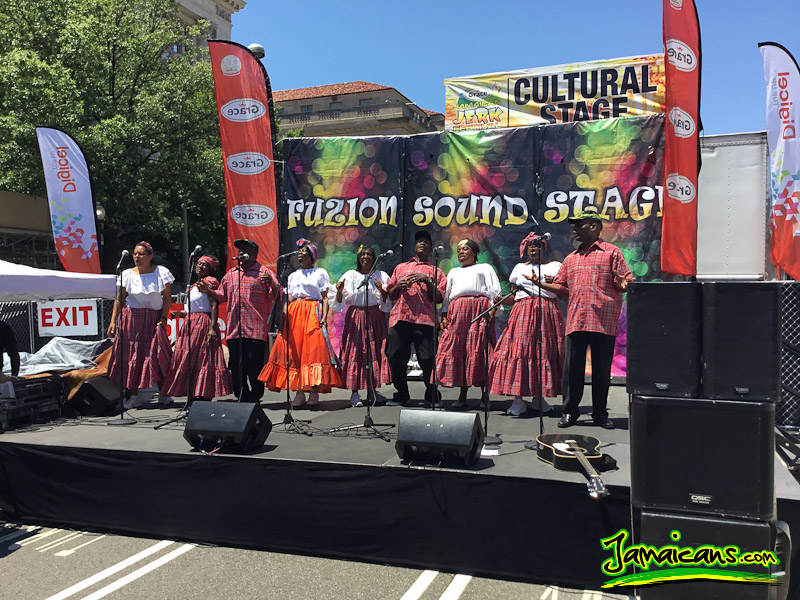 The Inaugural Grace Jamaica Jerk Festival brand as an International Food, Culture and Music Festival has had a successful 11year history in South Florida, and five in New York. The nation’s capital Washington DC, was next logical venue for the Grace Jamaican Jerk Festival.

As a part of the celebration in June of Caribbean American Heritage Month the Institute of Caribbean Studies, in association with VP Records, Jamaicans.com among others sponsors staged the First Grace Jamaican Jerk Festival, in Washington on June 19th, DC.

More than seven thousand Caribbean nationals, friends & families and, a mix of white and African Americans from the Washington D, C, Maryland, Virginia area, converged on Freedom Plaza, across from the Ronald Reagan building on Pennsylvania Avenue, between 12th and 14th Streets. For many, the fun-filled family day experience was entertaining, enjoyable and culturally enriching. GraceKennedy Foods, the ninety-four-year-old company, known as the Good Food People, treated the DMV massive to a slice of Jamaica/Caribbean life, with world-class reggae/dub poetry and soca music, cultural performances, a Kids Zone, games such as rock climbing, delicious spicy jerk cuisine, exotic foods, a Jerk Cook-off Pavilion, and drinks.

The main stage opened with the audio-visual dub poetry of the group No-Maddz band. Described by Chris Blackwell, founder of Island Records, as ” more like theater than a group”. They are also actors who have appeared in the film Better Mus’ Come. As a group No-Maddz is different. They signed an endorsement deal with Puma in 2011 as part of the Usain Bolt Record-breaking Puma FAAS campaign. Puma experienced the highest sales for a second quarter in the company’s history. They could be seen in adverts in the United States of America on MTV, VH1, TBS, CW, worldwide in every Footlocker and Puma store. Their set included “Rise Above Profanity”, “Romance”, “Sort Yuh Life Jamaica”, “New Bread Order”, and “Face My Fears.”

Next up was Barbados and VP recording artist soca star, Edwin Yearwood, formerly of the group Krosfyah. Yearwood, set included “Week end” “Good Time”, “Pump Me Up”, “Handle Ya Bizniz” “Nah Missin Me”, “Home Sweet Home” and ‘No Worries.’  The Barbadian Calypso Monarch and Crop Monarch, told me after his performance “given the anti-immigrant mood in the US, the festival was a good look for Caribbean immigrants. It showed that Caribbean people can come together peaceful, and enjoy our self without violence.”

Female Dance hall singer/sing jay Ikaya, DC debut was impressive. She was miss reality inspiration. From the passionate “Bang Bang”, she was permissive unforgiving on “Ugly Girl”, yet still “High on You”, the “Hard Way”, then flashed a mistress confident on ‘Good Up’, became the ride and die chick (rap/dj/sang) on “Ain’t ’Giving Up”, moved us with her conscious inspiration on  “These Tears”, “Ease My Pain”, “Fly Away” and “Broken Wings.” Also on the broken soul poverty reality track “Circumstances.”

Up next was one of the young singers Christopher Martin, who Freddie McGregor, told this reporter that long with Romain Virgo is turning reggae in Jamaican around.

Closing out the event was reggae icon Freddie Mc Gregor.

Despite long wait times and lines patrons enjoyed a variety of traditional Jerk dishes such as chicken, pork, fish, lobster, and the exotic ones like jerk ice cream and jerk popcorn. Celebrity chefs with tasty dishes competed in a jerk cook-off.

An interactive Kidz Zone will offer interactive activities to keep the young ones amused and engaged. A special children’s menu will be available offering jerk burgers, hot dogs as well as treats such as ice cream, cotton candy and other goodies.