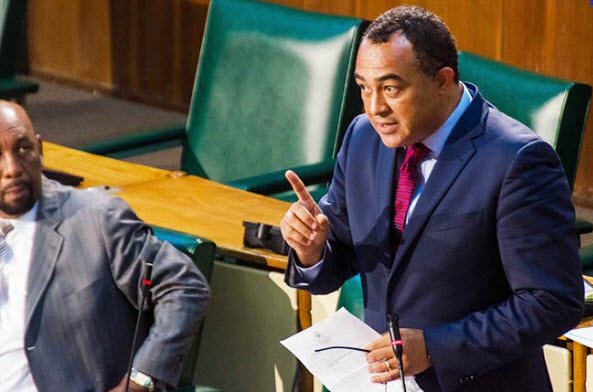 The Ministry of Health (MOH) will be ramping up its public education campaign on its initiative to prevent cervical cancer, through the introduction of the Human papillomavirus (HPV) vaccine programme.

In a Statement to the House of Representatives today (October 3), Portfolio Minister, Dr. the Hon. Christopher Tufton, said experts from the Ministry have been on the airwaves explaining the vaccination campaign and will continue to facilitate any opportunity to enlighten the public.

“The MOH, through the regional health authorities and the local health departments, will continue to engage the parents through the parent-teacher associations (PTAs) and the schools’ administration to ensure the dissemination of information, education and communication material,” Dr. Tufton said.

He said the Ministry is aware that there are lingering concerns in the public and that such members can call the Ministry’s toll-free line 1-888-ONE LOVE or 1-888-663-5683 to clarify those concerns.

The vaccine is being offered to girls in grade seven, between the age of nine and 14 years, free of cost. The vaccine is not mandatory. The target is approximately 22,500 girls, and each girl will need two doses given six months apart for full protection.

To date, more than 300 students in four schools have received the vaccine, while 20 opted out of the process. The four schools are Oberlin and Papine High in Kingston and St. Andrew, and Titchfield and Happy Grove in Portland.

Dr. Tufton informed that “Dear Parent” letters and accompanying fact sheets were distributed to schools for inclusion in the grade-seven school packages at the end of the last academic year to sensitise parents/guardians to the planned vaccine introduction.

Meanwhile, Dr. Tufton highlighted that the HPV vaccines are safe, noting that more than 200 million doses have been given around the world with no major side effects.

He said the most common side effects of the vaccine include redness, swelling and tenderness to the injection site. Other less-common effects include fever, nausea and upset stomach.

The World Health Organization (WHO) Committee on Vaccine Safety has confirmed that none of the conditions investigated were due to the HPV vaccine, and in December 2015 issued the following statement: “To date, GACVS has not found any safety issue that would alter its recommendations for the use of the vaccine.” he added.

Dr. Tufton said that cervical cancer is a major public health problem in Jamaica, as almost 50 per cent of the women who are diagnosed each year will die from this preventable disease.

He said the MOH has, therefore, introduced the HPV vaccine to provide 90-100 per cent protection against HPV types 16 and 18.

The Minister noted that the HPV vaccine has been available in the private sector for several years now and is, therefore, not a new vaccine to the population.

In addition, Dr. Tufton said the MOH has employed a school-based strategy for implementation to facilitate greater access to the population, as parents will not have to miss work or students school in order to benefit.

He also informed that prior to immunisation, education sessions are held with the girls to be vaccinated. A brief medical history is conducted to ascertain the girls’ fitness and eligibility for vaccination.

“As is customary with all outreach and school vaccination programmes, safety measures are in place to treat emergencies. Additionally, the surveillance mechanism monitors and investigates all events supposedly attributable to vaccination or immunisation,” the Health Minister said.

A budget was crafted for approximately $100 million for year one of the HPV vaccine introduction, which includes social mobilisation and communication; cold chain equipment; training and sensitisation; and procurement of vaccines and vaccination supplies. The estimated annual cost after introduction is $73 million.

A total of 48,000 doses of bivalent vaccine were ordered for 2017, through the Pan American Health Organization (PAHO) Expanded Programme on Immunization Revolving Fund, at a cost of US$7.80 per dose.

Cervical cancer is the second leading cause of cancer-related mortality in Jamaica and remains a significant public health concern. Current estimates indicate that every year, 392 women are diagnosed with cervical cancer; 185 die from the disease, with the majority of deaths occurring in women between 40 and 64 years of age.