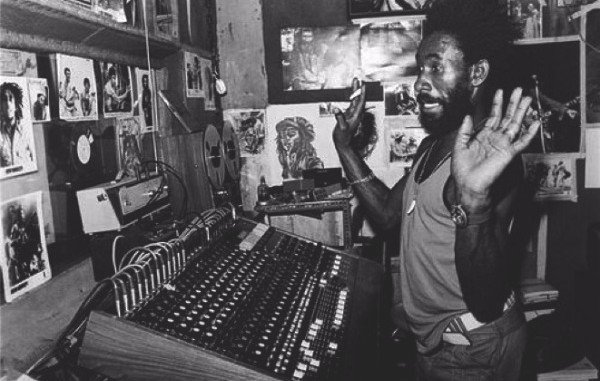 Dub music involves the rearrangement of elements in an existing recording by isolating individual instrumental tracks and adding various effects to create an entirely new work as outlined in a feature in Billboard magazine. The genre was celebrated in The Dub Cave in May 2017 at the inaugural Tmrw Tday Festival, which was held at Cris Blackwell’s Cliffside hotel, The Caves, in Negril, Jamaica.

Scratch Perry experimented with the mixing board at the Black Ark studio and established himself as one of dub’s most creative influences. With other visionary artistes who also experimented in their own studios and sound systems, the dub genre developed and became prominent Jamaican and throughout the world during the 1970s.

Every Sunday evening, Gabre Selassie curates a playlist that features traditional more intricate,” comments Gabre Selassie, whose thoughtfully curated playlist of traditional Rastafarian Nyabinghi chants, classic Jamaican tracks, contemporary roots reggae and dub mixes at his Kingston Dub Club. According to Selassie, dubbing is a “traditional Jamaican sound system vibe.” It involves during on the bass, “turning up the knobs,” and retaining the intricacy of the craft, as opposed to dancehall sound systems that take out the bass and drop it in while the artiste performs.

Gabre says there are different ways to approach dubbing. According to Gabre, King Jammy (Lloyd James) tours doing live mixes of his own productions, having each instrument recorded separately so he can make really detailed mixes. Gabre tales recorded as played on an album, CD or 7-inch, and do the mixes he can. Gabre does mixes like they are on a sound system, while King Jammy does them as if they are in the studio.

With the advent of digital reggae in the mid 1980s, the popularity of dub lessened in Jamaica, but is now seeing a renaissance in both live performances in clubs and at music festivals. Classic dub albums by the founders, including the late Osbourne “King Tubby” Ruddock who is credited as originating dub, are also being rediscovered.

Kevin Bourke, co-founder of the Tmrw Tday Festival, said that in its truest form, dub breaks down music and “redelivers it in a raw, impactful way.” The original dub practitioners viewed the genre as a prototype of modern electronic music and not just an extension of reggae. Addis Pablo, the son of Augustus Pablo who introduced the melodica to reggae in the 1970s, said the development of dub revolutionized the whole music business. The creativity and spontaneity of his father’s recordings, he said, placed him at the cutting edge of dub.

The innovations of King Tubby, an electronics technician and visionary music engineer, elevated dubbing into a global art form. He fixed television and radios, but he also built and maintained speakers and amplifiers for numerous sound systems. He took tapes from producers and stripped off instruments from the recording and added various effects to not only expand the potential of dub but to create the remix. Dancehall, dubstep, drum and bass and hip-hop all stem from King Tubby’s experiments and sonic innovations..