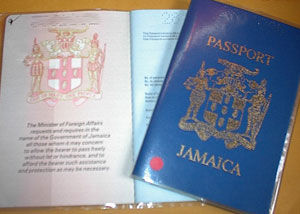 Sherri-Ann Kong was one of the most stuck up person I knew at Campion. She felt she had good reason to be. She was beautiful, rich, popular, lived in Beverly Hills, she modeled, she was on the swim team and every boys dream girlfriend. She was in my class but I don’t think she has ever acknowledged my presence. Actually, I don’t think she has acknowledged the presence of most of the class.

Her dad was probably one the biggest businessmen in Jamaica. He would drop her to school in the morning in the latest expensive car with all the gadgets. Quite a few expensive cars pass through our school however none had the gadgetry he had or changed models that often. Her class was upper, upper, upper class and she only associated with those types. Our school had plenty of those types, being that they were the children of politicians, rich businessmen and diplomats.

One night while riding on the bus from work I caught a glimpse of some one who looked like Sherri-Ann entering the bus. She was wearing jeans that hugged her body and yellow sleeveless top. Her hair was black and long. No, that could not be her I thought. She would never take a bus. The girl started walking down the isle and I realized it definitely was Sherri-Ann.

“Sherri-Ann”, I blurted out loudly in the bus.

I could not believe I did that. You see, she was the type that you would never call her name out loud. Especially on a bus!

“Hello” she replied. ‘What are you doing here?” She looked a little surprised.

What was even more shocking is that she sat in the empty seat beside me.

“Was this real?” I thought to myself.

Still in shock, I replied… “I live here. What are you doing here?”

I thought to myself. How inquisitive of me.

“I am here going to fashion school.” She replied.

“Ooh” I responded as I looked into her face. She was more beautiful close up. I never got this close to her before. I realized that her eyes were light brown. She was looking right back at me.

Yes my mother lives here and this is what I wanted to do. All that was going through my mind was…she is actually sitting beside me and talking. Would any of my friends believe me?

So what are you doing? I had heard you migrated but did not know it was here. Did your sister come too?

How did she know all that? How did she know I had a sister? Then I thought..who cares. Let me enjoy this moment. I answered all her questions and engaged her in conversation. We talked about the people at school, the latest movies, parties we attend while in high school. It was getting close to my stop and I did something really bold. So bold that at that very moment I almost could have taken back the words. “The next stop is mine and I have to get off, can I get your phone number?”

“Sure”, she said without hesitation. Is this a dream? She went in her bag and wrote the number on a piece of folder paper. When she handed it to me her touch was magical. Our eyes met and I am sure some happened. Well, maybe I was the only one. “You can call late my mother works at night”. In the back of my mind I was elated. She is home alone. As I got off the bus I gripped the phone number like it was gold.

My heart was pounding pretty fast. Should I call her tonight? One thing in my heart said yes but the other said no. Then again she looked a little lonely…why not.

As soon as I was out the shower I was on the phone. The living room was my quiet area when it was late at night. Aunt Fern always said she waned to be sure I had some privacy when I was making calls to my contact in New York. She picked up the phone and her voice ‘drove my heart’ crazy.

She said she was glad I called. She was bored. We talked for about 3 hours that first night. The next day we spoke four hours. This was going really good. Soon we were up to 6 hours. I could not wait to get home to talk on the phone. That chance meeting on the bus would not happen again because she was late that day. I had to find a way to see her. Should I ask for a date like Americans do? I had no car but maybe we could meet and go to a movie on a Saturday when I am off.

That night as we spoke she mentioned no one was at home with her. She again told me her mother worked late nights as a nurse. She was clearly suggesting I could stop by after work. She did make many more suggestions. I was already thinking of a plan.