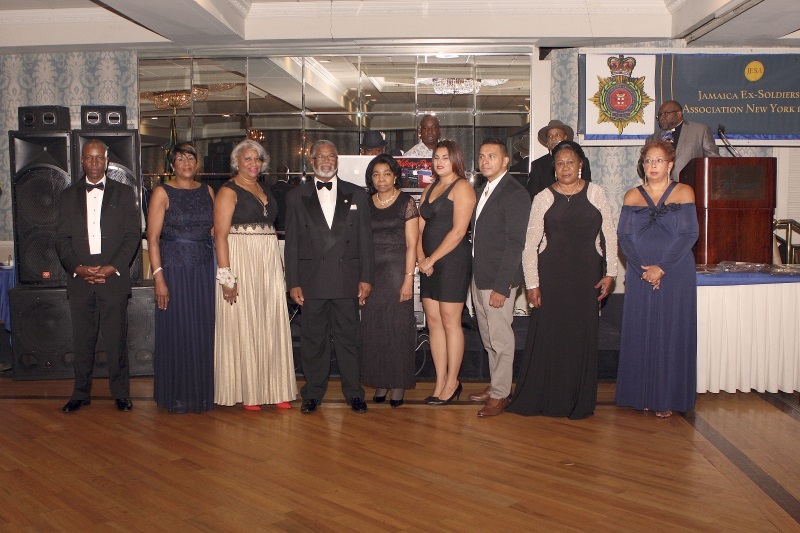 Saturday September 19, 2015 marked the 8th anniversary of the New York Chapter of the Jamaica Ex-Soldiers Association’s (JESA) fund raising awards and black tie gala at Antun’s Caterers in Queens New York. The weather cooperated on this fine September evening and all were resplendently dressed.

The ex-soldiers were busy on duty collecting tickets at the gate, greeting patrons as well as long lost friends, smiling and seating guests as they arrived, welcoming the members of the Canadian and Florida chapters of JESA and making certain that special guests and honorees were present. Overall the JESA members afforded a high quality of ease and familiarity in an ambiance and at a venue, fit for sociability.

The introduction of the Master of Ceremonies was done by none other than the Vice President, Mr. Mark Parkinson after the American and Jamaican Flag procession by Mr. Owen Bryan and Mr. Stafford Grant respectively. Welcoming remarks were given by Mr. Milton Morris, Board member of JESA.

The president of JESA New York, Inc., Mr. Fitzroy Thompson, lauded the efforts of the JESA members and expressed gratitude to them as well as friends of the organization who consistently came out in support of the work they do.

Violinist, Nadje Leslie, provided the musical interlude and filled the air with some traditional and contemporary Jamaican music such as ‘Evening Time’ and later some well-liked reggae standards as the crowd hummed along in satisfaction after which there was loud applause requesting an encore performance.

The evening would not be complete without the delectable delights in the Cocktail Hour at the ‘cold station’ and in the ‘Hot Chafing Dishes’ to be followed by toothsome entrees and dessert served by the most gracious waiters and waitresses. This made for a happy audience and paved the way for Disc Jockey to play music all night long. Dancing completed this lovely evening; an evening of which JESA can be proud. Jennifer P. Lumley is an Author &amp; Freelance Writer. Distinguished orator and writer, Jennifer hasably excelled in both the reading and writing of Jamaican Patois as well as the most polished English. She dabbled in Spanish &amp; Latin at Montego Bay High School in her early years while absorbing the Jamaican sunshine. The Author makes a conscious determination to orderly arrange the contours of life choices necessary to be more enlightened and to perform above expectations. Well-traveled, she later became favorably disposed to the New York lifestyle. She is a graduate of Marymount College, NY.