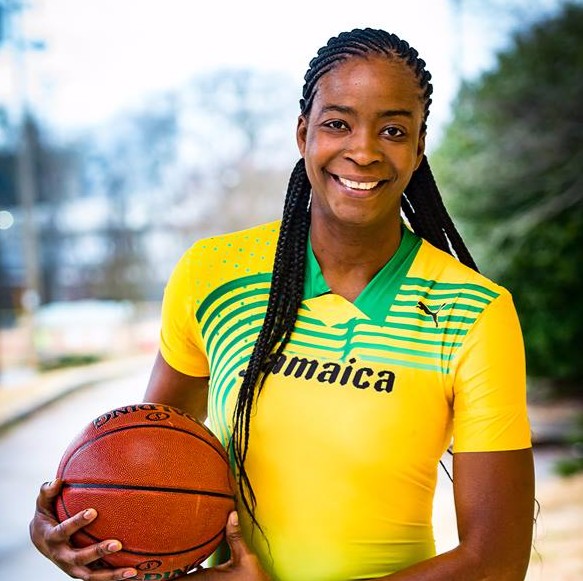 The incredible personal journey of Simone Edwards took her from an impoverished and gang-infested village in Kingston, Jamaica, to become the first Caribbean player in the premier women’s professional basketball league in North America. The retired 6-foot-4 center would ultimately win a Women’s National Basketball Association (WNBA) championship and return to her home country to win the Jamaica Basketball Women’s National Team championship.

On August 6, 2017, the Government of Jamaica conferred Edwards to its national Order of Distinction award in the rank of Officer (OD), recognizing her outstanding achievements and contributions to women’s basketball. Order of Distinction, Officer Class, is a national honor bestowed on Jamaican citizens who have rendered outstanding and important service to their native country in their respective fields. The prestigious honor will be conferred on Edwards during a special ceremony on National Heroes Day, October 16, at the King’s House in Kingston, Jamaica.

The history-making player signed with the WNBA’s New York Liberty during the league’s 1997 inaugural season. She also gained international prominence as a basketball star in Italy, Hungary, Israel and Spain, leading teams to championships, including the Israeli Cup and the Spanish Copa de la Reina. In 2000, she signed with the Seattle Storm’s inaugural team, ultimately becoming a WNBA champion in 2004. After a six-year career with the Seattle Storm, Edwards retired in 2006. She was then selected to represent her home country as team captain on the Jamaica Basketball Women’s National Team, winning the country’s first-ever gold medal at the 2006 Caribbean Basketball Championship. In 2014, she returned to the team as its head coach, leading them to another gold medal at the championship.

“I am humbled to receive the Order of Distinction award and to join past recipients who I have long admired and respected,” says Edwards, who is eager to return to Jamaica for the awards ceremony in October.

Simone’s story is a tale of struggle, survival and determination, growing up in a country with the world’s sixth-largest homicide rate. “Her island paradise involved daily shootings, and living in constant fear that she or someone she knew could have been killed. With this truth, Simone’s success is a symbol of national pride and a reason for Jamaicans to believe and hold their heads high,” says Jobi Tyson, co-author of Edwards’ revealing memoir, Unstoppable, which was published in June. “Hollywood couldn’t have scripted her journey any better,” she concludes. Edwards’ life story is in film development.

This summer, Edwards served as the national spokesperson for Caribbean American Heritage Month in June and published her heartfelt memoir, Unstoppable, about the harsh realities of growing up poor in an impoverished gang-infested village to finding the inner strength to maintain hope in the face of opposition.

About Simone Edwards
Simone Edwards, dubbed the “Jamaican Hurricane,” is a former WNBA player and the first Caribbean WNBA player. She is a motivational speaker and founder of two organizations: the Simone4Children Foundation, which she established in 2006 to uplift underprivileged children, and The Anti-Bully Project, which is a global initiative she began in 2015 to develop programs and resources to eradicate bullying in schools, sports and online.” The NCAA Women’s Basketball Ambassador is a graduate of the University of Iowa and Seminole State College, and she formerly coached women’s basketball for George Mason University and Radford University. She recently authored her highly anticipated book, “Unstoppable: A Memoir of Adversity, Perseverance & Triumph,” through her literature, film and television content creation company, Diverse Writers Room.