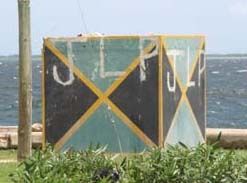 -Soon to be dubbed ‘ the Baghdad of the Caribbean-

Jamaican police shot dead 113 people last year, down from 133 the previous year. But Jamaica only has a population of 2.6 million, compared with eight million in New York City, which had around 25 fatal police shootings last year.

Amnesty International acknowledges the difficulties and dangers faced by those responsible for the policing of areas controlled by armed individuals. However, the organization believes that – even under these lethal conditions – the police and army must operate under the codes of conduct governing law enforcement agencies, which stipulate that officers must deploy only the minimum amount of force necessary to protect themselves and those around them.

Yuh memba when de infamous Natty Morgan was eventually caught (mi a use de word caught very loosely). Dere were about 150 bullet holes in im cyar. I don’t think dat a 150 bullet holes is considered ‘minimum amount of force necessary’ by de police. De police have a history of wild fire, dem just shoot first and ask questions lata. Tell me in which court cyan you put a dead man pon trial?? Yes Mr. Amnesty we DO have a problem in Jamaica because gun is more frequent dan cell phone. Mi a wonda how so such a small island ave so much gun anyway?? Afta wi don’t ave no gun factories pan di island.

“Human rights abuses committed by the security forces can only cause the situation to deteriorate and will undermine confidence in their ability to maintain peace and order and to protect the population,” Amnesty International said.

Last year the Jamaican Government invited detectives from London’s New Scotland Yard to the island to look into the deaths of around 30 suspected drug dealers. Earlier this year the Scotland Yard team concluded many had been the victims of a “shoot-to-kill” policy.

“In that context there are going to be occasional errors in judgement but it’s disingenuous to disregard the envirionment that we are operating in.”- Charles Scarlett Assistant commissioner of police

A don’t tink dat 113 people shot dead is an hocassional error. Misjudgement Missa Charlie is when yuh fling stone afta mango; miss and lick de neighba dawg. Is when yuh a play football and yuh miss de goal and clatt a man in im balls. Is not when yuh shoot 113 people dead.

“The culture of blame currently prevailing in Jamaica will not bring an end to the violence and human rights abuses we witness today, which are taking place in a highly politicised atmosphere. We believe that dialogue between the political parties is necessary to see calm restored and human rights protected,” Amnesty International said

So wait, who wi pos to blame, de bullets dem!! Gun nuh kill people, people kill people. Weda is de PNP (Pick Nuff Pocket) or de JLP (Jus Love Politricking), dey need to monita de police force like how stray mongrel dawg dig up in people garbage to mek sure dat der police is gwan like some wildas (shot a fire wid out cause) or anti-climax (bodies taken to the mortuary instead of court).

Ray Damdar is a Jamaican living abroad in Hartford, CT amongst the third largest Jamaican population in Merica. He is constantly amused by his culture has no odda choice but to comment.

Article Excerpts taken from website ‘http://news.bbc.co.uk/1/hi/world/americas/3674251.stm Jamaica wrestles with police violence’ and ‘http://amnesty.org.uk/deliver/document/13502.html–Jamaica: the culture of violence must stop”.