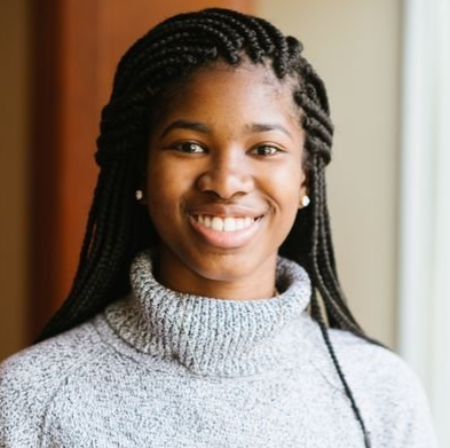 Jamaican American, Isis Anderson, 17, has been accepted into eight prestigious colleges and universities in the United States. After graduating from Achievement First Amistad High School in the spring of 2017, the young Jamaican scholar will have her pick of Yale University, Princeton University, Brown University, University of Pennsylvania, Stanford University, Barnard College, University of Connecticut, and Eastern Connecticut State University. April gained the attention of Twitter followers because of her acceptances, and perhaps more importantly, because she talked about her grandmother, an immigrant from Jamaica who left school after sixth grade. The achievements of Isis serve as testimony to the important legacies and influences immigrants bring to the US and how they inspire young people. In an interview with Affinity Magazine, Isis spoke of how her grandmother’s life experience inspired her. Isis Anderson with her grandmother

After a experiencing the challenges of poverty and a lack of closeness with her own mother, Isis’s grandmother always emphasized family values and worked to provide her children with the best possible opportunities. She immigrated to New Haven, Connecticut at the age of 31 and worked every day and night of the week except Saturdays, which allowed her to bring all of her five children to the US after a year, paying for their citizenship. Isis said that watching her grandmother and her mother respond to the challenges in life inspired her to develop a strong work and a realization that with education, she can accomplish anything.

Isis noted that the Jamaican women she knows have all been very independent and that growing up with a single mother and a strong grandmother showed her that she can take care of herself. “My grandma always told me that if I want something done, I would have to get it done myself,” Isis said. She added that she tends to break away from some of the traditional activities expected of Jamaican women, such as remaining at home and not pursuing any options beyond household duties. “I do not plan on being limited to the kitchen.”

While she was growing up, her family tended to focus on her athletic abilities – she received considerable attention for her tennis-playing – rather than her academic achievements and thought that only the only way she would attend college would be through athletics. She quit the sport in fifth grade, however, because “it was too lonely for me.” Instead, she listened to her mother and grandmother who had both seen their chances for an education taken away from them, insisting that she try for a quality education. From the age of three, Isis’s grandmother had her practice writing in the backyard during the summer, and in third grade, her mother transferred her to a charter school established to improve academic achievement in low-income urban areas. “From there on, it was the teachers who truly helped me get to the place that I am today.”

Isis plans to study history and sociology in order to understand how societies work. She believes that to make communities better, she needs to understand the elements that shaped them to begin with. She noted that her high school history classes tended to minimize the experiences of people of color and women, but she did independent research projects where she learned about intersectional feminism, which helped her to explore her own identity as a black and a woman in an academic context. She plans work in African American studies and Women’s/Gender studies to further her explorations of her identity and personal history.

Isis says that young people who want to follow in her footsteps should do their homework, get good grades, and be active in their communities. But, she said, the most important thing is using what influence you have to help others. “I started out by doing well for my grandma, but now I am continuing because it is evident that my success can help inspire others and drive them to success as well.” She wants others to know that their voices are just as powerful as anyone else’s, and that by speaking up, they can inspire others to do the same.