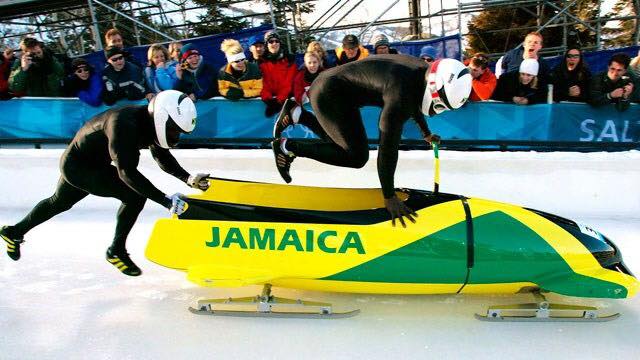 The Jamaican bobsled team, which debuted at the 1988 Olympics in Calgary, Canada, was back in the city to train for the 2018 Winter Olympics in Korea, but had car trouble on the way to a race at Canada Olympic Park. Luckily for the team, Dave Schnerch, who has been compared to “Irv Blitzer” in the film “Cool Runnings,” which was based on the story of the Jamaican team, came along to save them. According to Schnerch, as he was driving, he saw a very large white passenger van with its flashers on at the side of the road and stopped to offer assistance. When he stopped, “a whole bunch of people” came out, and he noticed the Jamaican symbol on the jerseys they wore. Schnerch had a battery charger with him and charged up the battery on the team’s vehicle, but as soon as they tried to drive away, the van shut down again. And again, Schnerch came to their rescue, intent on giving the team a ride to the race. However, there were too many bobsledders for a single trip, so Schnerch dropped four team members off first and then he and his wife drove home to get additional vehicles to carpool the remainder of the team to the race. All members made it to the race on time. Schnerch also gave the team his work truck to use until their van is repaired. Schnerch said that, like many people in Calgary, he feels a connection to the Jamaican bobsled team. “They’re part of us, the Jamaican bobsled team is Calgarian, that’s how we feel.” As for the Jamaicans, they also feel close to the community in Calgary and say it “is just wonderful.”

Show your support for the Jamaican Bobsled team by making donations on their fundraising and GoFundMe pages.