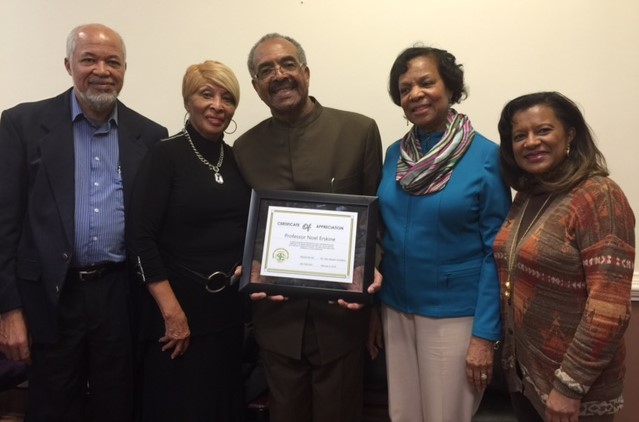 Professor Noel Erskine, who hails from St. Thomas and is the former Pastor of the Ulster Spring Baptist Church in Trelawny, has been recognized for his over 35 years of service to the Jamaican and Caribbean communities in Atlanta. Dr. Erskine has also been honoured for his extensive work in chronicling black history as well as his study of black religion.

A member of the American Academia of Religion and Black Theology, Rev. Erskine also serves on the Advisory Council of the Secretariat of the Free Trade Area of the Americas in Atlanta.

Presenting the award at the AJA’s Annual Black History Month celebration at the St. Timothy Methodist Church in Atlanta, on February 6, Immediate Past President of the AJA, Mr. Errol Ritchie said: “We want to publicly acknowledge you for being a founding member and Past President of the AJA.  We want to further publicly recognize your many contributions to the study and understanding of black theology and its relevance to us, as well as your involvement in activities to promote Jamaica’s culture.”

Mr. Ritchie pointed out that members of the Jamaican and Caribbean communities in Atlanta look forward to Professor Erskine’s continued efforts in helping them to better understand theology as it relates to the poor, under-privileged blacks, African and Caribbean people and the history that is taught to them and their children.

For her part, Jamaica’s Honorary Consul in Atlanta, Mrs. Jewel Scott, lauded Professor Erskine for his outstanding contribution to the Jamaican community and the awareness he has brought to the Jamaican and Caribbean communities about black religion.

Mrs. Scott said she hopes that through his work, children of Caribbean heritage will come to appreciate their backgrounds and heritage.

Accepting the award, Professor Erskine called on members of the audience to unite and work together to make Jamaicans in the Diaspora and those at home, the people God has called them to become – a people with love and concern for those edged out on the margins of society.

Dr. Erskine has chronicled several books, including From Garvey to Marley, Black Theology, Revivalism, Rastafarianism, The Theology of Dr. Martin Luther King and Afro Christianity in the Caribbean.