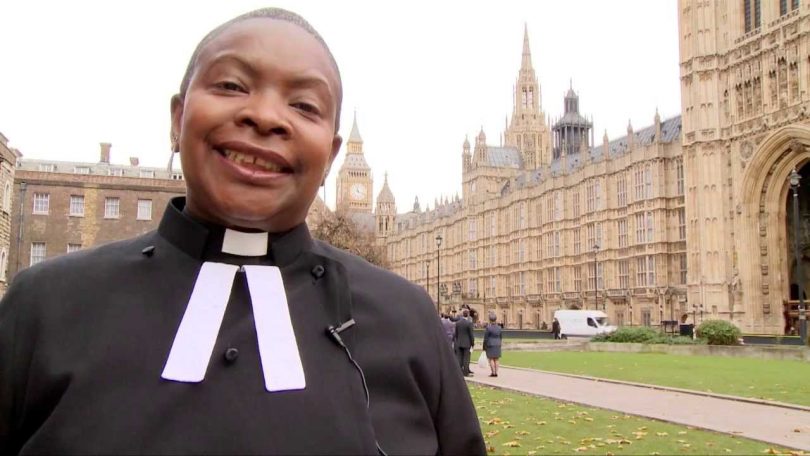 The Reverend Rose Hudson-Wilkin, an Anglican priest originally from Montego Bay, is Chaplain to Her Majesty Queen Elizabeth II and the 79th Chaplain appointed to the House of Commons in the United Kingdom, She is the first person of Caribbean descent to hold that position, and she is the first woman to serve in this role in more than 350 years. And now she has had a role in the historic wedding of Prince Harry, fifth in line to the throne, to American actress Meghan Markle at St. George’s Chapel in Windsor. The wedding is being called the most diverse and inclusive royal wedding in history. Reverend Hudson-Wilkin, 57, delivered a prayer from the nave of the chapel after the couple was declared husband and wife. Since November 2014,  Reverend Hudson-Wilkin has been Priest-in-Charge of St. Mary-at-Hill, City of London. In addition to being Chaplain to the Queen and Chaplain to the Speaker of the House of Commons, she is the priest vicar at Westminster Abbey. She formerly served as vicar of Holy Trinity Church, Dalston and All Saints Church, Haggerston. Reverend Hudson-Wilkin received her training as an officer in the Church Army and served at St. Francis, an arm of the St. James Parish Church before she moved to London. Her husband Kenneth Wilkin also trained in the Church Army, and both subsequently became ordained ministers. She received Holy Orders in 1994, the year the Church of England first allowed women to become priests. The Reverend credits her exposure to the exceptional spiritual role models she had while growing up in Jamaica for her success. She said their love and encouragement left a lasting impression on her. “Certainly the Montego Bay/Jamaican upbringing influenced me and helped to mold and shape my character and choice of career.”