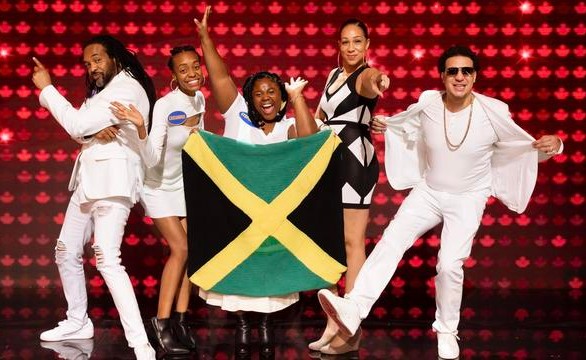 The popular reality television program “Family Feud Canada,” which is broadcasted on the CBC network, expects to feature some 70 families from across the country by the end of its current season. An episode scheduled for March 15,2020, included the Reid family of Brampton, a group of proud Jamaican-Canadians. The captain of the team, Wayne Reid, owns a Jamaican restaurant; the team included his son Justin, the owner of a barbershop, and his daughters Cassandra, Stephanie, and Felisha. The family stated that it “loves to party” and represents the restaurant at food festivals. The episode’s winners return to play for three consecutive nights for the chance to win as much as $30,000 per family.

Wayne Reid’s restaurant, the Reggae Kitchen Inc., has brought the authentic flavors of Jamaica to Canada. Reid’s success started with his great-great-grandmother who developed a unique jerk sauce recipe that was passed on through the generations until his great-grandmother began selling the recipe at the Boston Jerk Center, a farmer’s market in Port Antonio. The history of the recipe inspired Reid to create his own line of authentic Jamaican sauces, and he spent years trying various formulas. His efforts led him to be known as “the flavor guy.” And 20 years later, he bottled his first original sauce. He sought advice from the Brampton Entrepreneurship Center in order to expand his business, and with a new business plan, he went on to increase his revenues. His sauces include flavors like Mango, Tamarind, and Masala, as well as others. The sauces are available at more than 30 stores in Toronto and Scarborough. Customers can also order his sauces online.

Family Feud Canada, which is taped before a live audience, followed the original “Family Feud” program’s success in the United States, where it began in 1978. The show is now available in 72 markets worldwide, including the United Kingdom, Australia, France, India, and Indonesia.