Jamaican Cow Cod Soup on Insider’s List of 20 Weird Aphrodisiacs from Around the World - Jamaicans.com 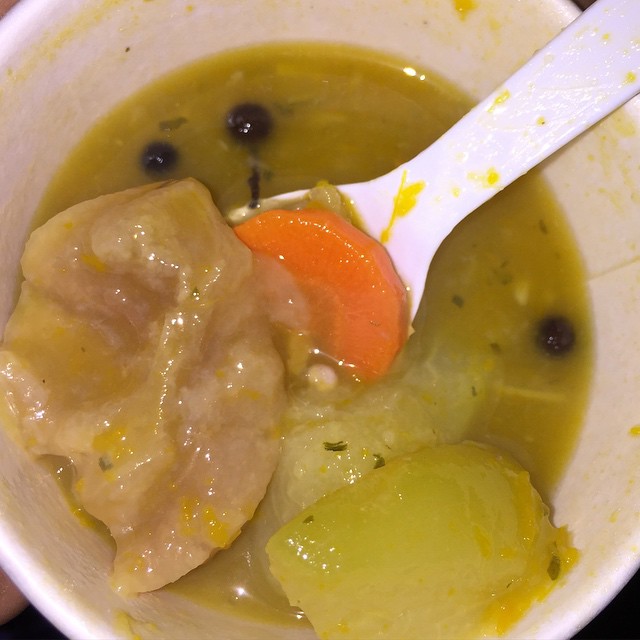 The online magazine Insider has included a common Jamaican dish on its list of foods that can enhance sexual pleasure. The major ingredient in Cow Cod Soup is the penis of a bull (not a cow). Traditionally, the bull’s penis (cod) is combined with bananas and scotch bonnet peppers and cooked in a white rum-based broth. Another version combines the cod with carrots, sweet potatoes, and pumpkin. The soup is thought to increase the sex drive in men. Aphrodisiacs have a long history dating back to the Fourth Century BCE. The word “aphrodisiac” comes from the name of the Greek goddess of love, Aphrodite.

In addition to Cow Cod Soup, Insider magazine lists the following consumables from around the world as aphrodisiacs.

Ambergis, the vomit of sperm whales, can either be obtained directly from a whale’s stomach or collected after the whale has expelled it. Researchers found a chemical in whale bile that enhances sexual desire in rats. Its effect on humans has not been verified.

Balut is the name for a boiled duck egg that contains the embryo of a duckling. This is a common street food in Vietnam and the Philippines and is considered to be equivalent to the drug Viagra for men. It is high in protein and contains an energy booster that is thought to enhance the sex drive in men.

Bird’s Nest Soup is a rare and costly dish – it can be priced as high as $900 per pound. Looking for wild nests can also be a dangerous undertaking, but once obtained, it is believed that the nest, which is made chiefly of the saliva that swiftlets use to construct it, helps individuals who need help in the bedroom when eaten as soup.

Casu Marzu, a name that means “rotten cheese,” comes from Sardinia. It is banned in many places throughout the world because it contains live maggots that frequently jump out of the cheese and into the eater’s eyes. The live maggots can also cause significant problems as they pass through the intestines, but Sardinians believe the cheese has aphrodisiac properties.

Cobra blood is said to enhance the sex drive. Because they are venomous, cobras are believed to bestow sexual powers, among others, on those who partake of the substance. Cobra blood is popular throughout Asia.

Dog meat is prized in South Korea and some other Asian countries for its aphrodisiac properties. It is said to give eaters a sensation that assists with romantic urges. According to Korean belief, the more tender the meat, the better its impact on the sex drive.

Durian is a tropical fruit found in Southeast Asia. It is known for its terrible smell and is an especially strange aphrodisiac because it is said to gain its special properties only after it has passed through the digestive system of an elephant. There are those who believe duran still contains those properties without making the trip. An Indian scientist studying mice who had eaten the fruit found that they displayed an increased libido and sperm count. The fruit does have nutritional value and is said to taste good if the smell can be ignored.

Fugu is a type of blowfish that can be deadly if not appropriately cleaned and prepared. It is comes from Japan, and when cooked by certified chefs, it gives diners a tingly feeling on their tongues. A dish of fugu is said to enhance the sex drive, but it can also cause paralysis and death if not prepared correctly.

Ginseng is a the root of a perennial plant and is thought to be an aphrodisiac chiefly because of its shape. Devotees believe it resembles a man’s legs or penis – the name means “man root” – and in a study performed by the medical school at Southern Illinois University, it was found to increase the libido of lab rats. It grows in northern China, Korea, and Siberia.

Leaf cutter ants are popular in Colombia and other countries in South America as aphrodisiacs. They are often given as a wedding present. The ants are high in protein and low in fat. They are generally roasted before they are eaten.

Maca root comes from a plant that grows in the high Andes mountains of South America. It is believed to increase the fertility of livestock, and scientific studies have shown that it does raise the sperm count of animals. Maca has been utilized as a sexual aid for hundreds of years, sometimes drunk as an herbal coffee.

Mustard’s spicy feature is what is thought to increase blood circulation, while its spicy flavor has ensured its popularity as an aphrodisiac in Europe and China for some time. Its effectiveness was believed to be so great that monks in China were not allowed to eat it.

Rhino horn, ground into a powder, is extremely popular in Africa and Asia as a sex aid. It is thought to help with erectile dysfunction. As rhinos are nearing extinction as a species, the horn cannot be obtained legally, but those with the money to pay for it can still get it.

Skink skin was identified as an aphrodisiac by the ancient Greek Pliny the Elder in his text “Natural History.” According to Pliny, the feet and muzzle of the skink, a small lizard of the Scincidae family, should be soaked in wine with arugula seeds and then consumed by those seeking enhanced sexual abilities.

Spanish Fly is one of the best-known sex enhancing substances. It has been used since the time of ancient Rome. The body of this beetle contains a chemical that irritates the skin and increases blood flow when it passes through the body. Consuming the substance is risky, however, as the secretions of the beetle literally cause blisters on the skin.

Tiger penis is favored in China and parts of Asia for its powerful aphrodisiac properties. It is usually served in soup or soaked in water and simmered in herbs. The purchase of tiger penis war banned in China and consequently brings a very high price when it is found in the marketplace.

Tuna Tartar is rich in calcium, phosphorus and the vitamins A, B, and D. All of these substances are important for sexual vitality. Tuna also contains folic acid and selenium that are said to improve the quality and production of sperm.

Wolf meat is popular in Mongolia and the Philippines for sexual enhancement. Mongolians use various parts of the wolf to treat other conditions like indigestion, but eating its meat is also bring out feelings of lust. It warms the body and is thought to increase desire.

Yartsa Gunbu is known as the “Himalayan Viagra.” It is a caterpillar fungus that is available only in spring. In Tibet, it is used for many medicinal purposes and is also commonly believed to cure erectile dysfunction and ow libido.