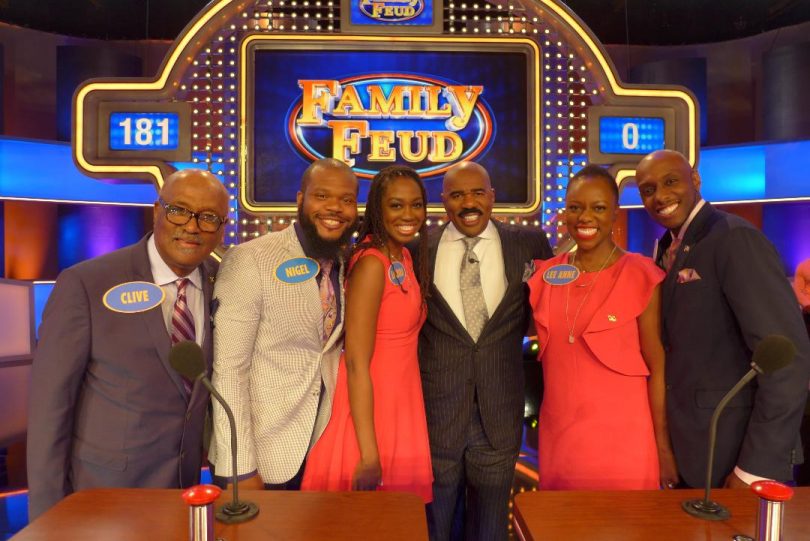 A Jamaican family, the Browns, will represent their home country in an episode of the US television program “Family Feud” hosted by Steve Harvey to be aired in February 2019. According to team captain Sabrina K. Marshall, “My family and I were so proud to represent Jamaica when playing “Family Feud” with Steve Harvey. We wore our pins with the Jamaican flag and posed the famous Usain Bolt pose every time we were introduced as the Brown family. Steve Harvey really got a kick out of my Uncle Clive’s strong Jamaican accent and crazy answers.” 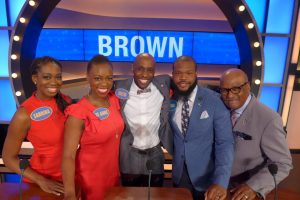 Jamaican Family, the Browns, to Be Featured on TV Show Family Feud in February 2019

The Brown family’s team included in addition to its captain Sabrina K. Marshall, who currently lives in Los Angeles, California, pursuing a career as a writer; Lee Anne Douglas-Trotman, a cousin, and her husband Justin Trotman, expectant parents of twins who live in Philadelphia, Pennsylvania, and are big fans of the 2018 Philadelphia Eagles Super Bowl champions; cousin Nigel Brown who lives in Delaware with his wife and three children and who all love to watch “Family Feud” together (Nigel and Steve Harvey are both part of Omega Psi Phi Fraternity Incorporated). And cousin “Uncle Clive” Brown, who loves to travel and lives in Dobbs Ferry, New York, with his wife of 48 years.

It was Sabrina’s idea to do “Family Feud.” She came up with the idea after binge-watching episodes of the program on The Game Show Network one rainy Sunday afternoon three years ago. She put together a team, they auditioned, and then they waited through the long selection process. Their first audition was in October 2017, but they only received the call-back from the show’s producer telling them they would be on the show in May of 2018. The actual program on which they appear was filmed in June 2018.

All of Brown family team members are big fans of “Family Feud,” and they all love Steve Harvey. The family says they had a great time during the whole experience and that the entire production and crew of “Family Feud” at Universal Studios were “incredibly pleasant,” Sabrina said. She added that they made the experience “welcoming and a lot of fun.”

Check your local listings for the times Family Feud is aired.

Photos provided to Jamaicans.com by the Sabrina Marshall & Brown Family