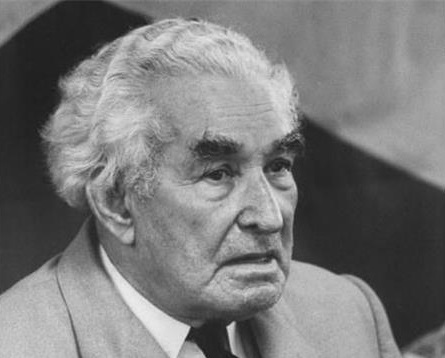 On this day in Jamaican history, the Right Honorable Sir Alexander Bustamante, the first Prime Minister of Jamaica, was born.

William Alexander Clarke, who later adopted the surname of Bustamante in honor of a Spanish captain who befriended him, was born on February 24, 1884, in Hanover. His mother, Mary Wilson Clarke, was a woman of mixed race, and his father, Robert Constantine Clarke, was an Irish-Catholic planter.

During his life, Alexander Bustamante traveled extensively and worked in a variety of locations, including as a policeman in Cuba and a dietician in a hospital in New York City.

In 1932, at the age of 48, Bustamante returned home to Jamaica, where he became an activist battling colonial rule. His frequent letters to the Daily Gleaner newspaper on the issues of the day gained him recognition, and in 1937, he was elected treasurer of the Jamaica Workers’ Union (JWU). During the labor rebellion of 1938, Bustamante became the spokesperson for the workers, who were chiefly of African and mixed-race heritage. After the revolt, the union became the Bustamante Industrial Trade Union (BITU). He went to prison in 1940 for “subversive activities.” He was released in 1943 and founded the Jamaica Labor Party (JLP) that same year.

Widespread anti-colonial activism among Jamaica’s populace led to a grant of universal suffrage by Parliament in 1944. His party won 22 of 32 seats in the first House of Representatives to be elected as a result of universal suffrage, and Bustamante became the unofficial leader of the government as Minister for Communications. When the position of Chief Minister was created in 1953, Bustamante served in that role and held it until the defeat of the JLP in 1954.

Bustamante was elected the mayor of Kingston in 1948. In 1952, he was arrested by authorities in the United States while in Puerto Rico on official business. While he initially supported the Federation of the West Indies, he gradually became opposed to it and worked toward Jamaica’s independence from Great Britain. Bustamante stated his party would not contest a by-election to the federal parliament, and when Premier Norman Manley, Bustamante’s rival and cousin, brought a referendum on the matter in 1961, Jamaica voted to withdraw from the Federation.

Jamaica became independent in 1962, and Bustamante became its first Prime Minister, serving from 1962 to 1967. When he suffered a stroke in 1965, he no longer participated actively in public life and the real power was held by his deputy, Donald Sangster.

Bustamante received a knighthood in1955 for his public service and was awarded an honorary LLD degree from Fairfield University in 1963. He became a member of the Privy Council of the United Kingdom in 1964 and received an honorary LLD degree from the University of the West Indies in 1966. Also in 1966, he was awarded the Special Grand Cordon of the Order of Brilliant Star by the Republic of China. In 1967, he was appointed as a Knight Grand Cross of the Order of the British Empire (GBE). He was recognized in 1969 for his achievements by becoming a member of the Order of National Hero (ONH). His portrait is displayed on the Jamaican one-dollar coin.

Bustamante married Gladys Longbridge in 1962. She had been his personal secretary from 1936 and was his partner in the trade union and political movement.
Bustamante died in 1977 and is buried in the National Heroes Park in Kingston.