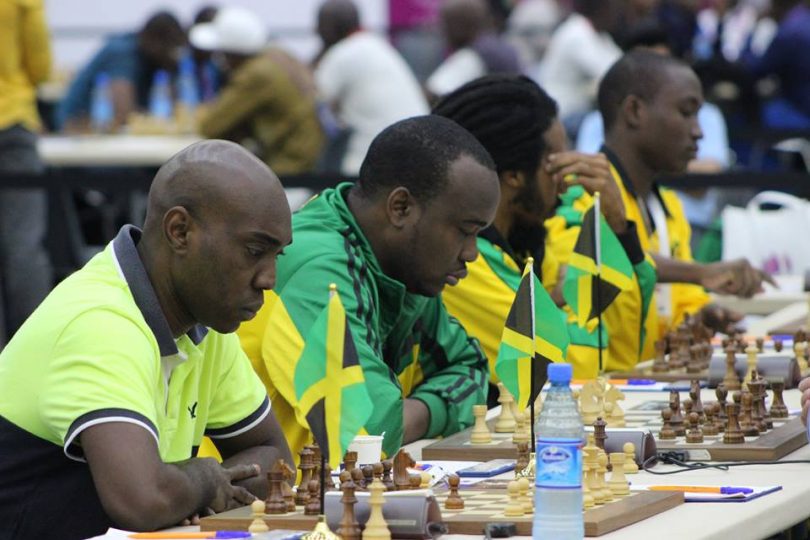 Jamaica’s men’s chess team produced what was termed an “epic” upset during the fourth round in the Open Section of the 42nd World Chess Olympiad in Baku, Azerbaijan. The battle involved Jamaican’s current champion, FM Warren Elliott, who defeated FM Bomo Kigigha on Board One. Brandon Wilson made a recovery from the previous day’s round, using a chess master class called Benko (Volga) gambit on Board Four, which his opponent Ochuko Emuakpeje could not answer. First-time Olympiad player NM Shreyas Smith, who was promoted on Board Three to replace veteran FM Malaku Lorne, suffered the only defeat among the Jamaicans.

The deciding match was on Board Two between FM Daniel Anwuli of Nigeria and the three-time Jamaican champion FM Damion Davy. The game included over 80 moves, but Davy remained solid in his performance and took the victory, which avenged Jamaica’s loss to Nigeria at the Olympiad in 2008. The president of the Jamaica Chess Federaton, Ian Wilkinson, is attending the Olympiad. He gave credit to Jamaica’s government, which, through the Sports Development Foundation, made participation by the Jamaican players possible. He credited the sponsorship of the Jamaica Chess Federation and the Kasparov Chess Foundation as well.