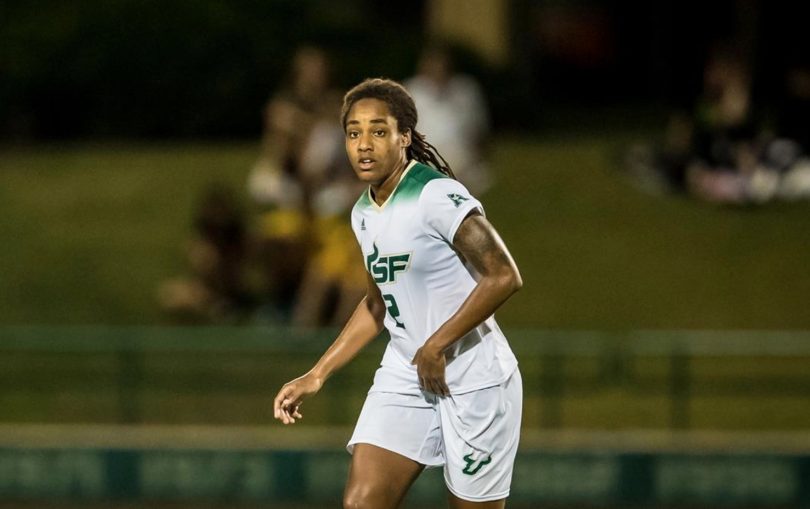 Chyanne Dennis, a senior at the University of South Florida and defender with Jamaica’s national women’s football team the Reggae Girlz, received the Defensive Player of the Year Award for 2020 from the American Athletic Conference (AAC). Dennis was also named to the All-Conference First Team.

Chyanne Ashley Dennis was born in 1999 in Sunrise, Florida, to parents Georgiana Freckleton and Errol Dennis. During her upbringing in Florida, she participated in numerous sports. She participated in three camps for the United States women’s national U-17 soccer team and attended the American Heritage Plantation High School, captaining the team to its appearance at the state championships twice. Dennis also played for Florida’s Olympic Development (ODP) team for two years.

She has attended the University of South Florida since 2017. At USF, she is majoring in Business Management and playing for the South Florida Bulls women’s football team. She started in 13 of the 17 games she played during her freshman year, helping the team to record eight shutouts. As a defender, she had a record of seven shots and one assist. In her sophomore year, she started as a defender in 14 of the 17 games she played and was instrumental in helping the team record seven shutouts.

Dennis trained with the US women’s national U-17 soccer team before shifting to the Jamaica U-20 national team. She competed at the CONCACAF Women’s U-20 Championship in 2018, earning two caps with her squad playing a total of 180 minutes. Also in 2018, Dennis earned three caps with the senior national team at the CONCACAF Women’s Gold Cup, which was the qualifier for the 2019 FIFA Women’s World Cup, the first time Jamaica competed in the World Cup tournament.

The women’s soccer team at USF was ranked at Number 24 in its first appearance in the United Soccer Coaches Poll in 2021. It has also been nationally ranked in the TopDrawerSoccer poll at Number 16. Observers describe the team built by Coach Denise Schilte-Brown as having “an impenetrable defense” for 2021, and it has yet to concede a goal any of its matches thus far in the season.