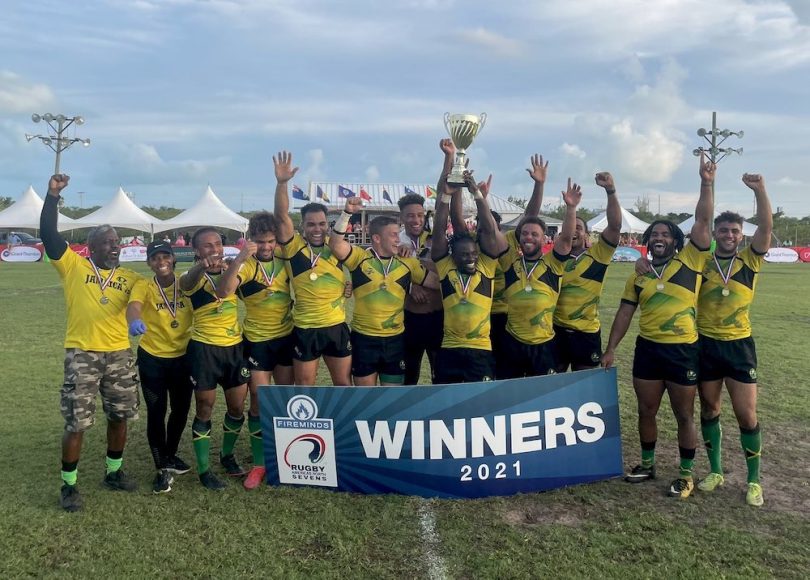 The rugby team from Jamaica won the 2021 Fireminds Rugby Americans North Sevens tournament title at the Meridian Fields in Providenciales, Turks and Caicos, on October 17, 2021. Jamaica dominated the match over rival Mexico to win with a score of 21 to 7. The tournament is a qualifying event for the 2022 World Rugby Sevens Challenger Series.

The Fireminds tournament was held over two days, with Jamaica drawing in Pool A with the British Virgin Islands and Turks and Caicos and Mexico drawing on Pool B with Barbados and Curacao; Guyana, Bermuda, and Belize were in Pool C. Under the rules of the tournament, the top two teams from each pool advanced to the Cup competition after playing the first day, and the last-place team played for the Plate on Day Two.

On the first day, Jamaica beat TCI with a score of 24 to 5 and went on to defeat Bermuda 31 to 7, advancing to the next round with a defeat of Guyana 24 to 0. Jamaica then shut out Barbados 21 to 0. Mexico made it to the finals by beating Curacao 33 to 0, Barbados 22 to 19, and the British Virgin Islands 50 to 0. Mexico then defeated Barbados 12 to 5 before advancing to face Jamaica in the finals.

The tournament was sponsored by Fireminds and included teams from Turks and Caicos, Jamaica, Mexico, Barbados, Bermuda, Guyana, Belize, British Virgin Islands, Curaçao, and the Dominican Republic, which vied for the chance to win a spot in the pending World Rugby Sevens Challenger Series in 2022. The winner of that competition will join the HSBC World Rugby Sevens Series as the 16th and final team. There was no tournament in 2020 due to the COVID-19 pandemic. The competition marked the return of international rugby in the Caribbean for the first time since the beginning of the pandemic.

Fireminds is a provider of technology services with locations in North and Latin America and the Caribbean. According to Niall Brooks, the general manager of Rugby Americas North (RAN), the organization welcomes its partnership with Fireminds, the title sponsor, as rugby makes its return to the region. The tournament represents a critical tool in developing the sport and the creation of a direct path to the World Series.