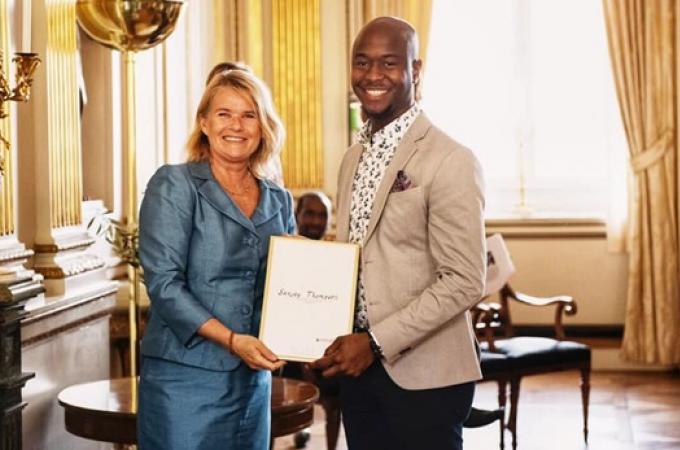 Sanjay Thompson of Old Harbor is the first Jamaican to be honored with the prestigious Global Swede Award. He is also the sole recipient of 2019 to come from the region of the Americas. An alumnus of St. Jago High School, Thompson was one of 28 top international scholars to be recognized for their achievements at a luncheon at the Ministry of Foreign Affairs in Sweden on May 21, 2019. Thompson has lived in Sweden since 2017 and is pursuing a Master’s degree in criminology at Malmo University. Prior to moving to Sweden, Thompson earned a Bachelor’s degree in psychology from the University of the West Indies. Maimo University is the ninth-largest in Sweden and has 24,000 students enrolled. Thompson received his nomination from the Global Swede Award in recognition for his “excellent social, innovative and entrepreneurial performances”. Thompson decided to enter the criminology program at Maimo believing he could help Jamaica solve some of its crime problems and aid the nation’s vulnerable populations. He said he wants to contribute to his home country and to the field of criminology as well. Commenting on his award, Thompson said he was humbled by the nomination from the University’s Department of Criminology, adding that he was grateful to receive the top Swedish government award. He also said that being honored with the award makes him even more motivated toward his goals. After receiving a scholarship from Maimo he made up his mind that he would “give it my all.,” he said, expressing his thanks to both Sweden and Jamaica for the experience he has had to date.

The Global Swede Award is given each year by the Swedish Institute, the Ministry of Enterprise and Innovation, and the Ministry of Foreign Affairs to recognize students who are innovative and entrepreneurial as well as excellent representatives of their home countries and Sweden. All universities in Sweden have the chance to nominate an international student for the award.