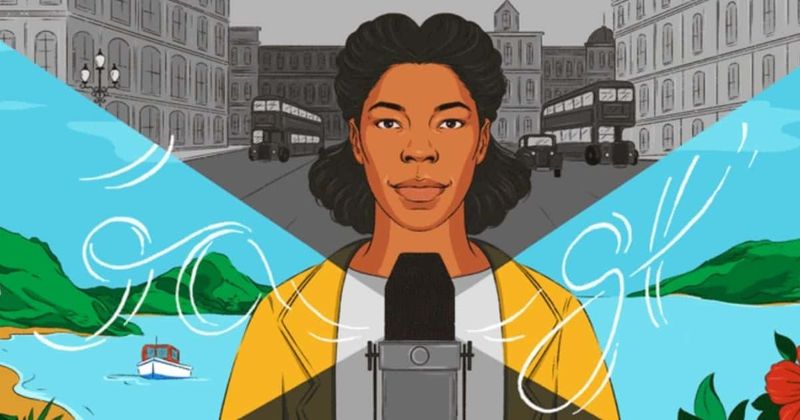 The Google Doodle for October 10, 2021, celebrated the Una Marson, a Jamaican writer, advocate, and broadcaster who was the first Black woman to work as a radio producer at the BBC in the United Kingdom.

Marson was born in 1905 in Santa Cruz, Jamaica. She became the first woman to serve as publisher and editor of a magazine when she established “The Cosmopolitan” in 1928. The magazine focused on social injustice and gender issues. As she was inspired by the political and literary environment of London, she moved there in 1933, only to be shocked by the racist attitudes she encountered. In response, Marson began her fight for equal rights, joining Dr. Harold Moody, another immigrant from the Caribbean and the founder of The League of Colored Peoples, a civil rights organization.

When Una Marson returned to Jamaica in 1936, she wrote poetry and plays, the performance of which she self-financed, and inspired a new generation of Jamaican writers. She also founded the Save the Children Fund in Jamaica before moving again to England in 1938 where she took a job with the BBC. During her time there, she worked with luminaries like George Orwell and T.S. Eliot, as well as producing the popular weekly program “Calling the West Indies.” The program was first broadcast in 1943 and featured poems and short stories by unknown Caribbean writers, providing them with a global audience. The show also promoted the perspective of women in the Black International Movement, which was chiefly dominated by men. Her achievements were marked in 2009 with a Blue Plaque on her former home in London. The UK’s Blue Plaque is installed to honor those who have made significant impacts on their community and world.

The Google Doodle honoring Marson is the work of Sarah Madden, an artist based in the United Kingdom. Madden said the Doodle was personally meaningful to her as a woman of Jamaican heritage. She noted that the work was inspired by Marson’s legacy in UK broadcasting during World War II. Madden added that she hopes the Doodle will inspire people to learn more about Marson and her role in British history.” I hope other women can learn about her and be as inspired by her as I am,” she said.

Dr. Delia Jarrett-Macauley has written a biography of the pioneering Black female broadcaster. She said she was proud that Marson was being recognized for her contributions. Robert Seatter, the head of BBC History which provided support for the celebratory Doodle, called Marson a “bold and brave pioneering voice” at the BBC and that her “Calling the West Indies” radio show was the forerunner of “the seminal ‘Caribbean Voices’” program. Her radio series ran from the 1940s to 1958.