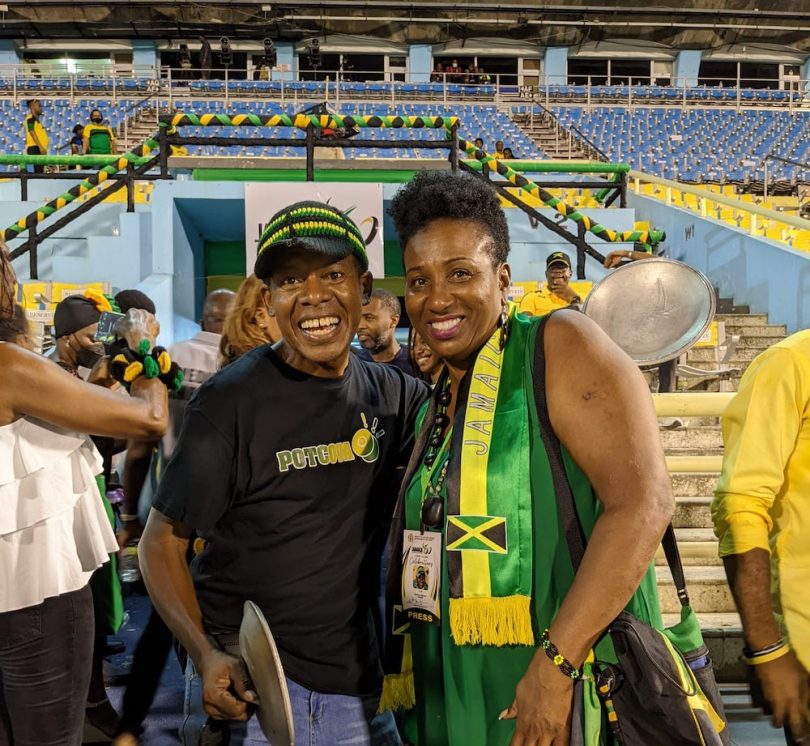 Seven-year-old Jamaican Ozana Samuels attended her first ever Jamaica Independence Grand Gala annually held at Jamaica’s National Stadium in Saint Andrew on August 6th, 2022. She hardly could sit down through the opening ceremony to the end of the Gala’s electrifying activities themed ‘Re-igniting a Nation for Greatness’. Her teen sisters had been to annual Galas before but calculated this as the best. In fact numerous persons who spoke with Jamaicans.com cited this year as the best overall to remember for years to come.

The opening ceremony began with a march by the massed bands, uniformed groups and Guard of Honour. The military band provided triumphant sounds to welcome everyone in grandeur beyond anticipation as Jamaica’s 11 most prominent dignitaries and invited guests arrived. Minister of Culture, Gender, Entertainment and Sport, the Honourable Olivia ‘Babsy’ Grange was the first to arrive, and then she officially welcomed the others inclusive of Jamaica’s Chief Justice Hon. Mr. Justice Bryan Sykes OJ, CD. The nation’s leader of Opposition Mark Golding was the ninth to enter just before Jamaica’s Ninth Prime Minister the Honourable Andrew Michael Holness ON PC MP, who was ushered in amidst an uproar from the crowd before the Governor General His Excellency the Most Hon. Sir Patrick Linton Allen, ON, GCMG, CD, KSt.J. 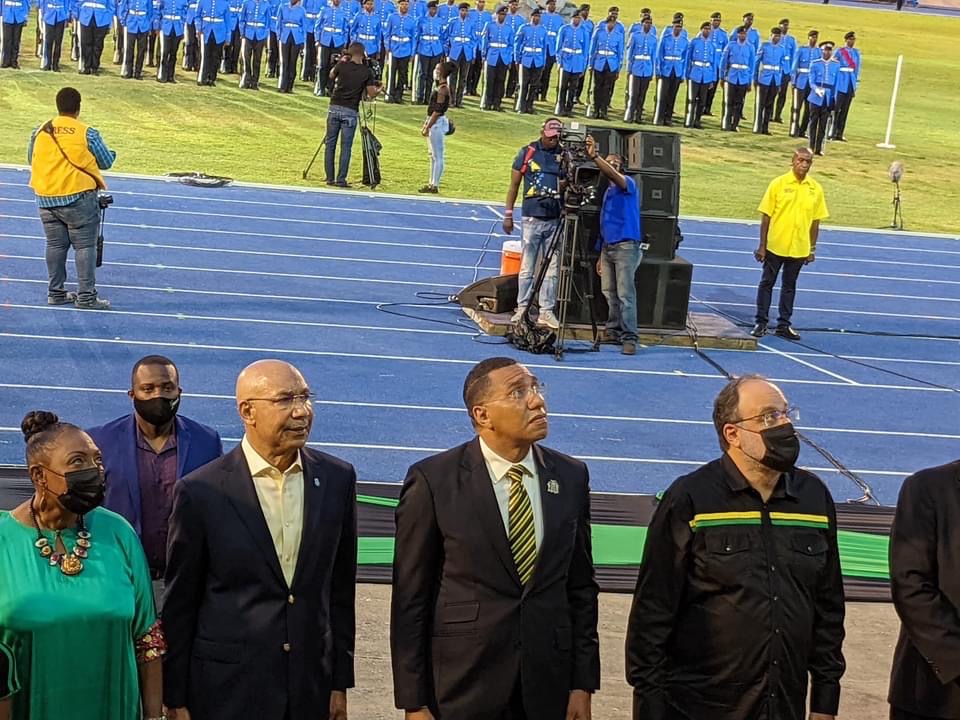 At the end of the ceremonial opening was the flag raising ceremony signalling the official start of the Gala. Former Miss World, Toni-Ann Singh backed by the Gala’s choir led the National Anthem. The flag had been specially relayed to the Jamaican Prime Minister by two paratroopers from Guyana’s Defence Force who landed on the Stadium’s infield. 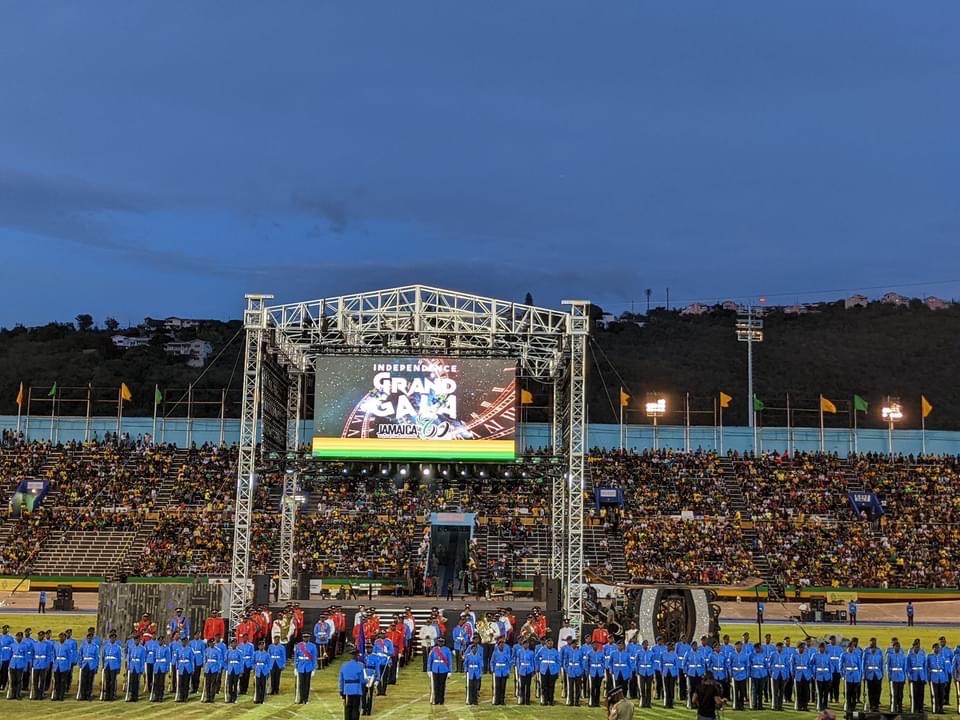 Then the festivities of the Gala pulled pride, pomp and oftentimes expressions of piety from the 30,000 plus onlookers stacked in the National Stadium under the watchful eyes of those who were forced to watch online.

The Gala was the climax of the week’s events to celebrate Jamaica’s Diamond Jubilee as the nation celebrates 60 years of Independence. The ‘Float and Street Parade’, the ‘National Festival Queen contest’, ‘Mello Go Roun’, ‘Original Dancehall Stylee’, ‘Jamaica Praise’ were events kept in the Jamaica Independence Village, National Arena, between August 1st and August 6th, 2022. Momentum was kept by popular soundtracks that encouraged listeners to ‘Rise Up and Take Your Place’.

An excerpt of the Military Tattoo of the Jamaica Defence force (JDF) was delivered at the beginning of the Gala festivities. The soldiers skilfully ‘built’ a house in just under 10 minutes, before performing a Rescue Mission of the husband of the female resident by helicopter.

The Gala’s main script centered around three individuals put on a mission to find the greatness of Jamaica worth celebrating and worth remembering. The devout christian Miss Gee is from the country, Gelissa the hottas girl is from uptown and the aspiring dancehall artiste Bredda Bredda hails from the innercity.

The JahMap app was introduced and the three explored Jamaica through the Grand Gala sometimes themselves highlighting noted accomplishments by Jamaicans. They soaked in Jamaica’s history and culture retold by performances of the nation’s signature songs, music, dance, and visuals, with scenes played out by popular artistes and groups.

Some 2,500 costumed performers transformed the Stadium field into a riveting theatrical account of Jamaica’s growth as a nation. The colourful and well made costumes were beyond imagination. Field performances by stilt walkers, the balloon-created Rastafarian, Johnkoonu characters set the stadium ablaze to triumphant uproar and the national heroes were well highlighted.

There were short videos on outstanding Jamaicans, and brief narrations by television host and a former National Festival Queen Dahlia Harris playing the friendly emcee along with Lalee.

Danece Alia Jácas, commonly known as Sacáj, the 2022 Festival Popular Song winner did her stint and the Queens paraded the stage.

During the entertainment and revival segments, there was hardly anyone not stirred to move during the vibrating performances especially by Sister Pat and the Grand Gala choir. Kukaboo in his green and white get up was energetic to ‘Big Up Jesus’ also kept the crowd on their feet. He was militant in leading the crowd to flag to right then to the left simply because their space was too small to actually march.

The crowd took cue in belting out favourites like ‘My Strength’, ‘We’ll fight for the right to be free’, ‘Many Rivers to Cross’, ‘One Blood’, and so on. The costumed groups took turns forming ‘Peace’, ‘Love’, ‘Jamaica’ the map, crosses and hearts across the field. 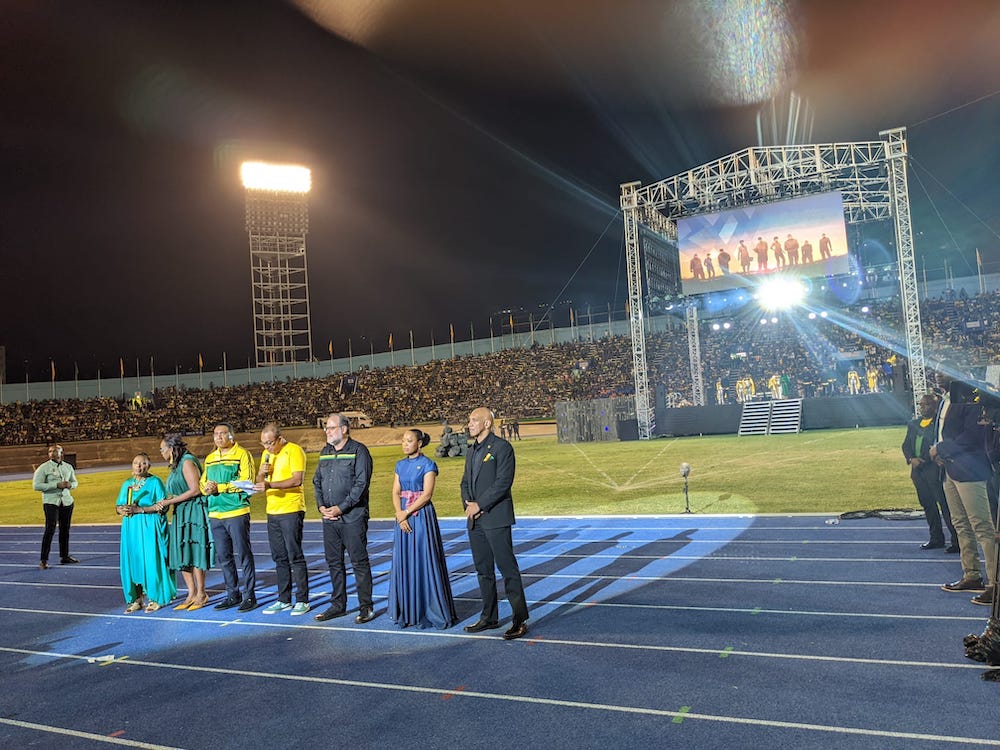 Special tribute was given to the front line workers being the medical, security, JCF and JDF, teachers and farmers.

Later on two iconic Jamaican performers were given citations to acknowledge their work to and for Jamaica – Derrick Morgan who said he had waited all his life to get such an award, the moment being the best in his 82 years on earth. Sanchez was also given citation and did a few hits to show his appreciation sending tingles down spines with his smooth performance. Jimmy Cliff was also paid tribute and the Prime Minister was a good student in learning the Leggo the bird move. 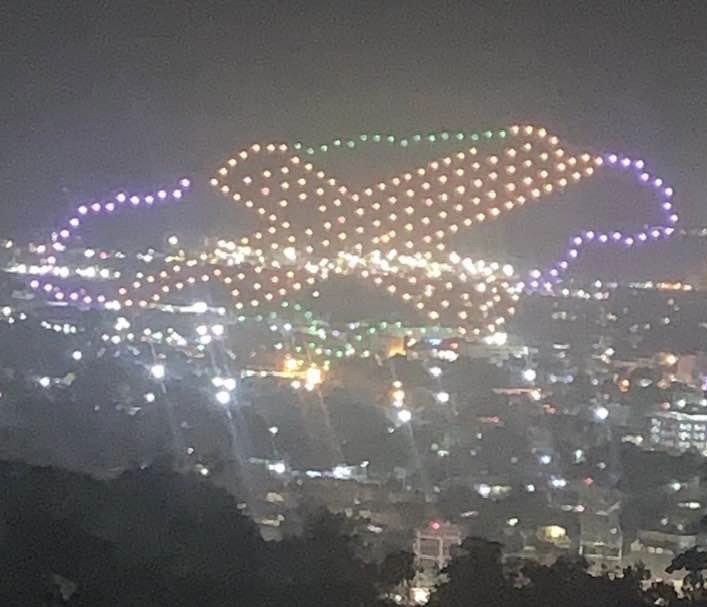 The addition of the 300-drones show was a marvel of Jamaican technological advancement. When the lights dimmed, the patrons in the stadium turned on their phone lights so that the stadium glittered like diamonds below the images being formed above in the sky by the drones. Fever pitch excitement spread through the stadium as images changed from the national symbols and emblems, to iconic images reflecting a few greats such as Usain Bolt, Bob Marley, Jimmy Cliff, Miss Lou the Jamaica Queens, and worded themes such as Jamrock Peace, Jamaica 60 themes. All the time ‘King of Kings, ‘Who Shall Be Afraid’ prompted ‘Alleluias’ and piety.

Before the anticipated Bikers Show and the fireworks signalling the end, the three who were sent on a mission returned to admit to their findings of greatness discovered through every aspect in Jamaican life, sports, entertainment, and the arts and a review of some accomplishments shared earlier.

In the end, Bredda Bredda convinced that the greatness of Jamaica was found in ‘the expressions of the people, the echoed vibrations of their culture lived in sweet melodies of our victories as he poetically said we are natural story tellers.’

The 2022 Grand Gala production proved this for many who said it was fit for Broadway, and that it will be remembered with all its glitter for a long time.