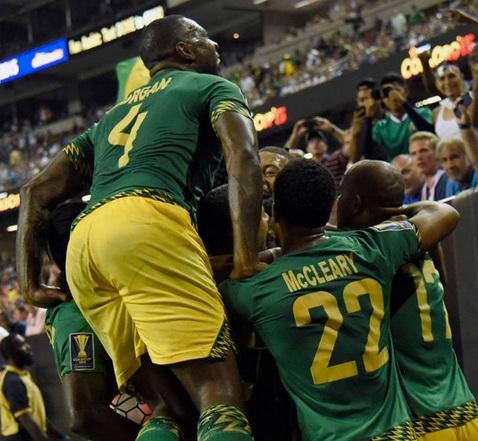 On Wednesday July 22nd, 2015 Jamaica’s Reggae Boyz defeated defending champions the USA 2-1 in their CONCACAF Gold Cup semi-final match. They are the first Caribbean country to make it to the CONCACAF Gold Cup Finals. Jamaica’s Darren Mattocks scored the first goal at the 30th minute, while Giles Barnes added the second goal with a magnificent 20 yard free kick 6 minutes later. Michael Bradley scored at the 48th minute for the USA. The semi-final match was held at the Georgia Dome in Atlanta, Georgia.It was the first time the Reggae Boyz have defeat the US on their home soil.  The CONCACAF Gold Cup Finals will be on  Sunday July 26, 2015 at 7:30 PM at the Lincoln Financial Field, Philadelphia, Pennsylvania.