JHF Volunteers Recognized in Both Broward and Miami-Dade Counties by Commissioner Holness and Congresswoman Ros-Lehtinen - Jamaicans.com 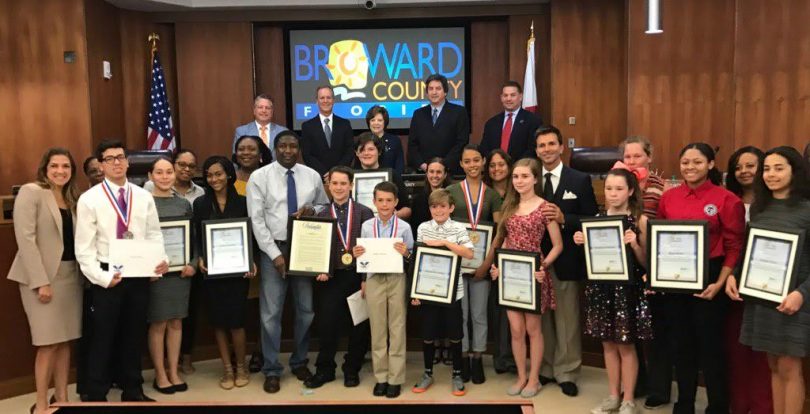 As National Volunteer Week #NVW comes to an end, Joshua’s Heart Foundation and its volunteers are humbled by the recognition they and the foundation received this week from the Broward County Commission led by the Honorable Dale V.C. Holness, Commissioner District 9 and the Honorable Ileana Ros-Lehtinen, Congresswoman Fl-District 27.

Joshua’s Heart has been mentoring and motivating young people and their families to give of their time and treasure for over 11.5 years. To their credit, these young people have taken the baton and run with it to the tune of over, 350,000 individuals served and over 1.3 million pounds of food distributed in South Florida, Jamaica, Africa and India. Every year they choose to make a difference through philanthropy and several have now taken on individual projects in their schools and neighborhoods and others even in the land of their family ancestry.

In Broward County, a special Proclamation declaring April 25th, Joshua Williams Day was made by Commissioner Holness on behalf of the county before presenting 25 volunteers in attendance with Certificates of Appreciation, while 4 standout volunteers received their Presidential Certificates of Service along with the medals accompanying that award.

In Miami-Dade County, Representative Ros-Lehtinen, who just announced her intent to retire this year from the United States Congress, presented 34 young volunteers in attendance with their Certificates of Appreciation while 7 standout volunteers received their Presidential Certificates of Service along with the medals accompanying that award. In addition, she awarded a Certificate of Special Congressional Recognition to all the volunteers.

In its 10th year, one volunteer, Colin Wanless, opened and now champions the Boca Raton Chapter of Joshua’s Heart.  This past Saturday, the Boca chapter distributed groceries, personal items, books and toys to over 300 families in the City of Lake Worth as part of the foundation’s Global Youth Service Day initiative. For all their hard work, Lake Worth Mayor, the Honorable Pam Triolo, recognized the young volunteers, together with their sponsors and supporters for their service in their quest to eliminate hunger and poverty in the county  with a Proclamation declaring April 29th  as  Global Youth Service Day in Lake Worth.