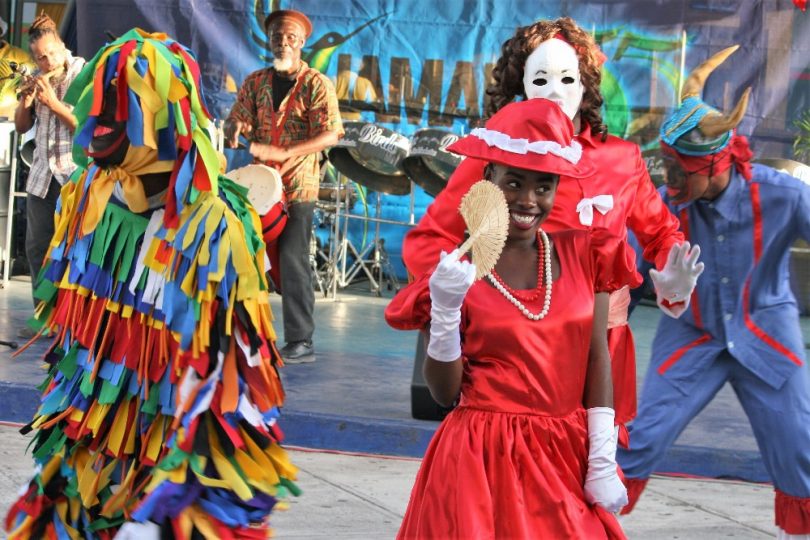 Arriving passengers at the Norman Manley International Airport last Friday (December 22) were elated to be greeted by this colourful traditional Jonkanoo Band from the Jamaica Youth Theatre accompanied by an authentic “‘Fife and Drum” Quartet. The crowd of onlookers were treated to an energetic display of Jonkanoo antics along with nostalgic Jamaican mento music. The origin of the word junkanoo is disputed. Theories include that it is named after a folk hero named John Canoe or that it is derived from the French gens inconnus (unknown people) as masks are worn by the revelers. Douglas Chambers, professor of African studies at the University of Southern Mississippi, suggests a possible Igbo origin from the Igbo yam deity Njoku Ji referencing festivities in time for the new yam festival. Chambers also suggests a link with the Igbo okonko masking tradition of southern Igboland which feature horned maskers and other masked characters in similar style to jonkonnu masks. Many of the colonies Jonkonnu was prominent, Bahamas, Jamaica (as Jankunu), Virginia celebrated Jonkonnu. Similarities with the Yoruba Egungun festivals have also been identified. However, an Akan origin is more likely because the celebration of the Fancy Dress Festivals/Masquerades are the same Christmas week(Dec 25- Jan 1st) and also John Canoe was in fact an existing king and hero that ruled Axim, Ghana before 1720, the same year the John Canoe festival was created in the Caribbean.

The festival may have originated several centuries ago, when slaves on plantations in The Bahamas celebrated holidays granted around Christmas time with dance, music, and costumes. After emancipation the tradition continued and junkanoo evolved from simple origins to a formal, organised parade with intricate costumes, themed music and official prizes within various categories. 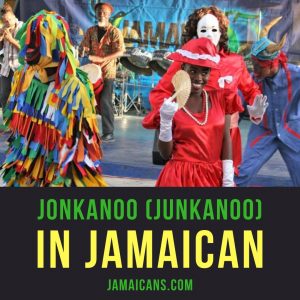