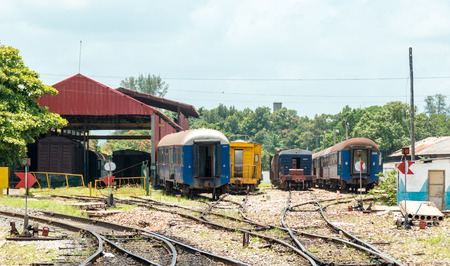 Joseph A. Matalon, chairman of the Jamaica Railway Corporation (JRC), says his enterprise is ready to revive rail routes between Montego Bay and Kingston. A planned investment of US$250 million will be put toward the effort, which is designed to facilitate Matalon’s re-entry to the tourism sector. Tthe enterprise team of the corporation is hoping to present recommendations to the Cabinet in early January 2017, Matalon says. He made his remarks at the launch of downtown Kingston’s space art initiative on December 5, 2016. Previously, trains moved tourists from Montego Bay to Appleton Estate. Considering the current status of the rail system, Matalon has estimated that existing lines could make four of these trips per day. Noting there are several potential stops along the route – including caves for people who want to visit caves – his plan includes the reinstatement of the dormant handcraft post along the route. This should become a self-sustaining and standalone entity, he said, additionally stating that bauxite firms support the continuation of the railway and want to use it instead of trucks. The Government’s proposal consists of three phases: the Rum Train, the bauxite area to Spanish Town, and Spanish Town to Kingston. According to Matalon, squatting represents one of the most serious obstacles to the reintroduction of travel by train. While there is no definitive position from the Government on squatting, authorities have agreed to remove squatters. The removal is a challenge and is expensive It also requires the Government to meet specific conventions imposed by the United Nations concerning human rights. Jamaica’s railway system was launched in the mid-1800s and stopped operations in the early 1990s. The railway revived for a short time in 2011, but stopped again within a year. Jamaica’s railway lines were the first opened to traffic outside of Europe and North America.