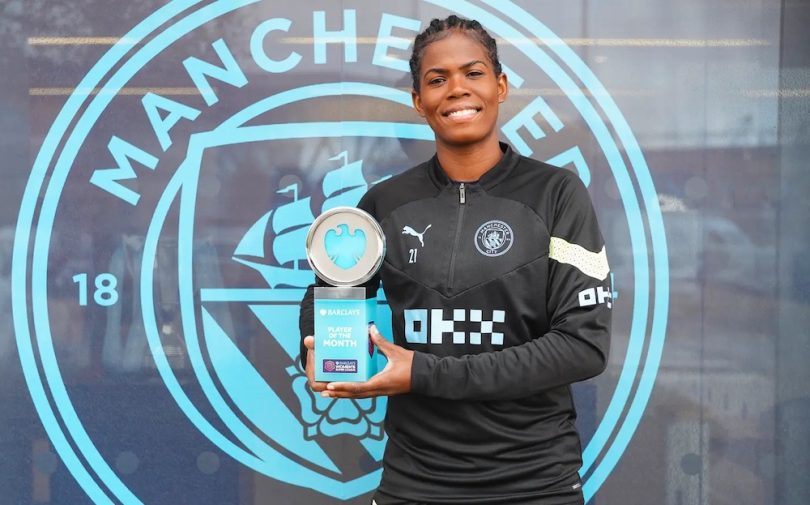 Khadija “Bunny” Shaw of Jamaica, playing her second season for Manchester City in England, was named the Barclays Women’s Super League (WSL) “Player of the Month” for October 2022 in recognition of her contributions to the month of successes attained by Man City in its matches against Leicester, Tottenham, and Liverpool. Shaw scored five goals and one assist – two goals versus Leicester to give Manchester City a 4-0 victory, and then less than a week later, scored another two goals against Tottenham for a 3-0 win before scoring another win against Liverpool -to add to the matches’ totals. She is currently the top scorer in the WSL for the season. Commenting on her Player of the Month title, Shaw noted that October had been very successful for the team and said she was “delighted” to win the title for the first time.

Shaw, who was nicknamed “Bunny” because she loves carrots, relied on her determination to get herself out of the challenging environment in which she grew up. Shaw refused to be defined by the perceived limits of Spanish Town and worked to change the convention narrative generally applied to young women in the area. She remembers thinking as a child that she could be the individual who would change the nature of football in Jamaica.

Her parents did not allow her to play football while she was growing up because there were so few opportunities for female players to have professional careers in the sport. They almost considered it a waste of time, she told an interviewer at the BBC after joining Manchester City in 2021. Her parents thought it was unrealistic and even dangerous for her to consider a football career, but she persevered, and her talent led her to the top of her profession.

Shaw said that she and her team are feeling very confident after the recent victories and that she is personally getting lots of enjoyment out of playing. However, she believes that getting results and helping the team to have as much success as possible are her major goals. She said she will continue to work hard on her goal-scoring form to help continue the team’s recent positive run and to “keep the smiles on our fans’ faces.”