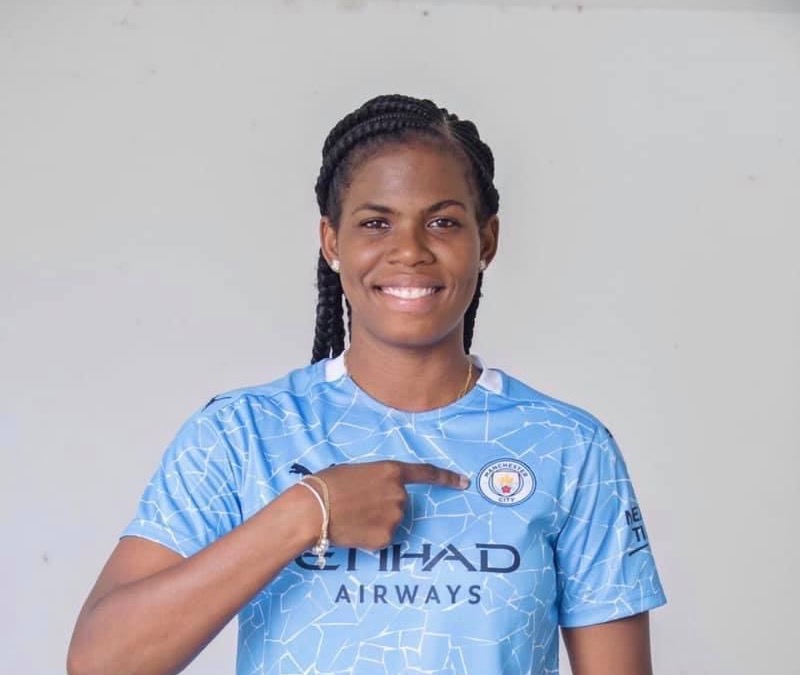 Jamaican Khadija Shaw, the leading Division 1 Feminine scorer in the 2020-2021 season, has signed a three-year contract with Manchester City. Speaking to ESPN, Shaw said what attracted her to Manchester City was “The way they build up, the way they use the channels, the way they play through the team, the channels, and how exciting they are when they’re going forward.” She added that she could see herself playing and being successful in that environment.

Shaw has played for Bordeaux since 2019 when she decided not to enter the National Women’s Soccer League draft to explore her options outside of the United States but added that the decision required hard work and considerable sacrifices as it meant she had to leave her home and travel to Europe.

Shaw, 24, named Lucy Bronze, her new teammate, as someone she is particularly excited to play alongside. She competed against Bronze in France when she was with the Lyon team and believes it will be a “great experience” to play on the same team as someone she competed against in the past. “you could tell the sort of player she was. She’s so motivated and she always wants to win,” Shaw added, saying that Bronze could motivate her as a teammate.

Khadija Shaw was a member of the Jamaican Reggae Girlz squad that was the first to qualify for a World Cup. While the team is playing in the Summer Series in the United States, Shaw has not joined them as the French season finished in the beginning of June. The Jamaicans defeated Nigeria 1-0, but then lost to the US Women’s National Team 4-0. Shaw said the team is very small and that it is very difficult to compete at some levels “with the lack of investment we currently face.”

Shaw was part of the Jamaica squad that were the first Caribbean nation to qualify for a World Cup. The team is playing in the Summer Series in the U.S., but Shaw hasn’t joined the squad with the French season finishing at the start of June. Jamaica beat Nigeria 1-0 and lost to the United States Women’s National Team (USWNT) 4-0.

Facing difficulties is not new for Khadija Shaw, however, who suffered considerable personal losses of family members while she was growing up. She also played against boys in her early years, which was also very hard. Jamaica does not have many camps or play many international friendlies, but yet qualified for the World Cup, and Shaw believes that having that kind of motivation and will to compete and be the “best version of yourself” is helpful in attempts to achieve life goals.