How Much Do You Know About The Spanish Town Iron Bridge - Jamaicans.com 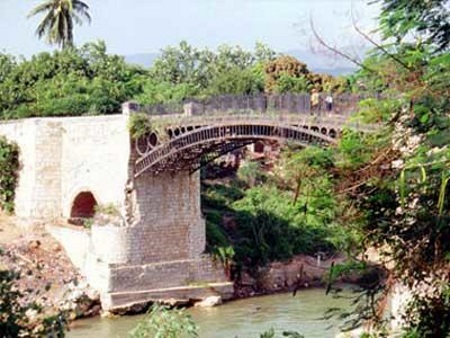 The Spanish Town Iron Bridge in St. Catherine was the first of its kind to be built in the Western Hemisphere. Constructed in 1801, it spans the Rio Cobre River where it runs through St. Catherine. The bridge came into being through an act of Jamaica’s House of Assembly and was originally designed to be built in stone. For unknown reasons, the bridge was made from cast iron instead and reinforced by stone abutments on each side. The parts for the bridge were made by the Walker Ironworks Company in England and shipped to Jamaica to be assembled. This bridge is one of only two Walker bridges still in existence. The bridge weighs 87 tons and has a span of 82 feet. The cast iron bridge displays a mix of European and West Indian aesthetics.