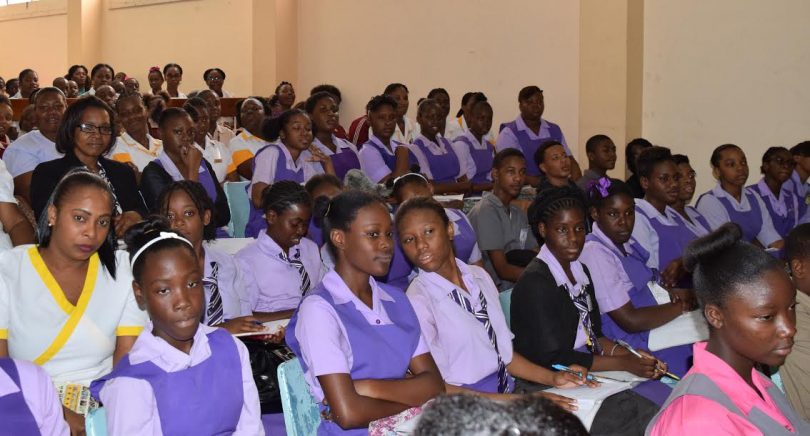 According to the World Health Organization (WHO), depression at its worst can lead to suicide, which is now the second leading cause of death among 15-29 year olds. In light of this fact, the Manchester Health Department (MHD) hosted a Symposium targeting scores of students, teachers, guidance counsellors, caregivers and parents within the parish of Manchester to address the issue of depression.

The Symposium, which catered to some 140 students was held at the Cecil Charlton Hall in Manchester on Tuesday, April 4 and was also commemorated against the background of the annual recognition of World Health Day which is observed on April 7. The world-wide theme is “Depression: Let’s Talk”, a priority area of concern for the WHO.

The Southern Regional Health Authority Regional Psychiatrist, Dr. Doreth Garvey who presented on recognizing depression, explained to the audience that depression is “a spectrum of mood changes, varying in intensity, duration and characteristics”. She pointed out that it was important for persons to recognize that when these mood changes persist for two weeks or more and affects the level of functioning for the individual, it is now a disorder.

Dr. Garvey added that it was important for persons to recognize that everyone is at risk of becoming depressed and shared several avenues of assistance and support for persons who may be facing difficult situations.

For guest speaker and 2015 Jamaica Festival Queen, Ms. Chereese Ricketts, depression is an under-recognized issue which is affecting many Jamaicans. She told the audience that she struggled with depression for some 12 years but found several ways of dealing with and overcoming the disorder. She noted that it was important for persons to surround themselves with persons who will provide support and for persons to find what works best for them and what brings them joy and positive outcomes.