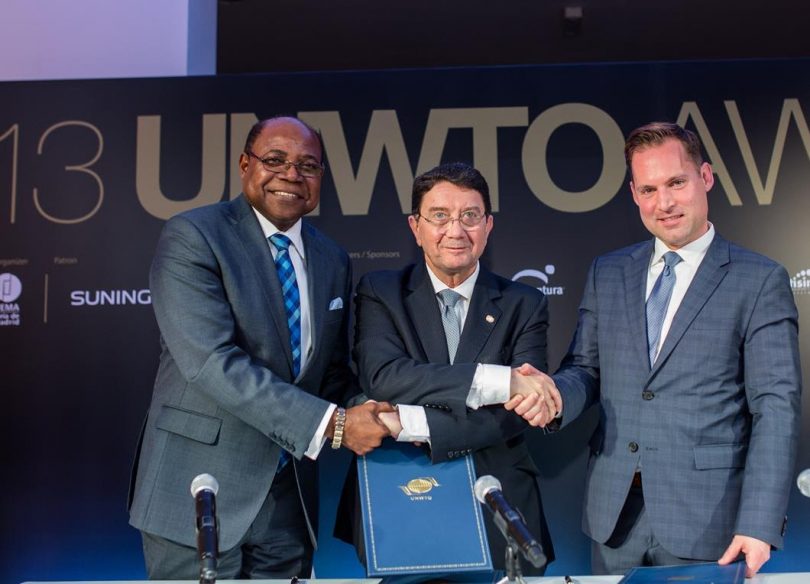 The event, which is a collaborative effort between the Government of Jamaica, international development firm Chemonics International and the UNWTO, will be staged from November 27 to 29 at the Montego Bay Convention Centre, St. James.

Speaking during the historic signing ceremony, Minister Bartlett expressed that he was honoured to have participated on behalf of the Prime Minister of Jamaica, to concretize arrangements to host such a prestigious event in Jamaica.

“This signing will see an international conference of great magnitude and importance to global tourism, being hosted in Jamaica. We look forward to showcasing our destination but more so within the context of sustainability and the building of public-private-partnerships,” said Minister Bartlett.

Secretary General of the UNWTO, Taleb Rifai shared that the conference will kick-start discussions to create on-the ground activities to develop tourism across the globe from such partnerships.

“We keep talking about the need for public-private-partnerships, but we fail to translate that on the ground in any effective manner. Minister Bartlett together with Ibrahim Osta,‎ Chief of Party for Building Economic Sustainability through Tourism at Chemonics International, will together cooperate in making and designing this very important meeting in Jamaica towards the end of this year,” said Secretary General Rifai.

The agreement is of great historical importance because it signals the first time that the UNWTO will stage a world conference on tourism in the Caribbean or the Americas.

Minister Bartlett, who is also the Chairman of the Board of Affiliate Members of the UNWTO, described the event as a very unique opportunity as it will also allow the world’s spotlight to be on Jamaica, and by extension the Caribbean, which is heavily dependent on the economic power of tourism.

“Jamaica is a part of the Caribbean archipelago of states which is the most tourism-dependent region on earth. It means therefore, that to be positioned to invite the world to see us in the practice of sustainability tendencies, embracing best practices, and showcasing how we have been able to manage, and grow and build the economic well-being of our people is something, that for us is a once in a lifetime opportunity,” said Minister Bartlett.

Two of the expected deliverables from this conference will be an Outcome Declaration and the publication of the second UNWTO Affiliate Members Global Report on Public-Private-Partnerships. The UNWTO will also present a report to the UN General Assembly in 2018, with regards to the activities of the International Year of Sustainable Tourism for Development, of which the conference will play a major role.

At a meeting prior to the signing, Minister Bartlett highlighted the great strides Jamaica has made in forming public-private-partnerships in the spirit of sustainable tourism for development, through the Tourism Linkages Network model and financial support provided specifically for Small and Medium Tourism Enterprises (SMTEs).

“Tourism is the fastest way to transfer money from the rich to the poor. We can certainly do this effectively through our Linkages initiatives,” shared the Minister.