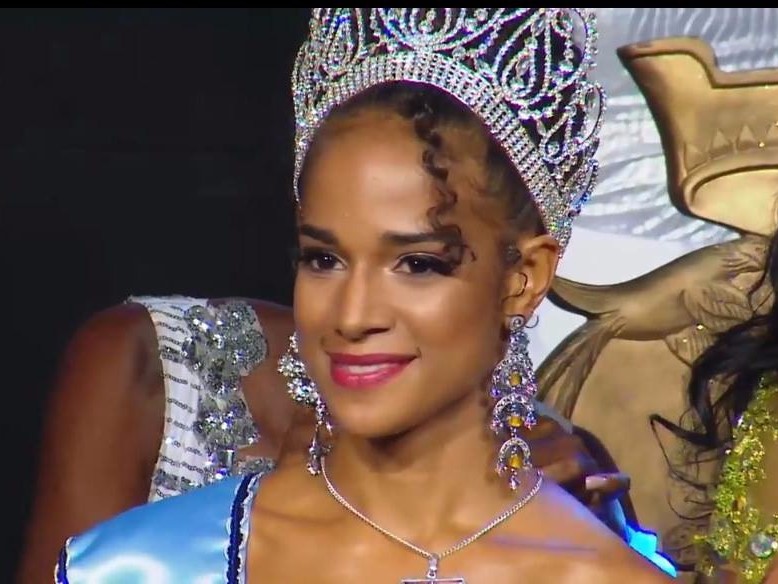 A favorite with the pageant crowd from the beginning, Solange Sinclair won the title of Miss Jamaica World 2017 and was crowned at the Grand Coronation event on Saturday, September 23 at the Courtleigh Auditorium in New Kingston. She bested 17 other finalists for the title and will represent Jamaica at the finals of the Miss World pageant, which is scheduled in China in November. Taking second place was Diedre McKenzie, and Jeneque Pinnock was in third place.

The choice Sinclair as the winner of the title sparked some controversy on social media, as pageant watchers comments reflected broad and complex perceptions and ideas about what beauty is, the historical context of beauty, issues of societal acceptance and self-esteem, and race inequality.

Some viewers took to social media “expecting” to see comments about the skin tone of the winner: “Just here to see the light skin comments/black crap!!! As long as she born a JA OK for me ,no care wa color coulda purple!!! Congrats girl.” Others signaled a resignation to a general tendency in society that favors lighter-skinned people: “Its is not because they are not taught. They all know black is beautiful. The dark skin girl chance is not the same as the girl that is fairer skin colour and same with the white girl she is preferred over all others. That’s life.”

Some made comments about the pain caused by decisions seemingly based on skin color: “Every nation look down on others that are different from them. They always put black people on the ground so we learn to be defensive so lighter colour people may get hurt.” “Natalie Robinson Miss Universe Jamaica was dark skinned, so all colours are getting exposure. The comments are due to inequality which often takes place in these pageants. Out of Many One is not to be used to justify colour discrimination which is what many women of darker shades have experienced in the past.”

Many comments called for unity among all black people: “If I’m not mistaken Black is black right? I mean some of us are a little lighter and some darker but at the end of the day we’re black right? ….lets just be happy for her and be proud for her as a Jamaican. Out of many one people, never ever forget” and “at the end of the day we are all black people, just different shades. I’m a mixed Indian descent and I’ve experienced what you are saying. People will always hate, it doesn’t matter if it goes against their well being. Our motto is “Out Of Many One people” we learn that in school, but maybe teacher need fi spend more time breaking down what that means.”

Some commenters noted that “if you go back to the past 5 years the association has been doing a great job of showing that we in JA come in all shades (mixed not necessarily pure races). Some where down the line most Jamaicans are mixed with another,” and others noted that “Not one of you in here with the prejudice remarks will deny Bob Marley and his father was full on white! Her grandmother is Madge Sinclair: is she white? If you’re gonna claim full Jamaican, then you are an Arawak ‘Indian”. Everybody else came after and that’s why we are “Out of one many people”

A great many of the comments on social media made mention of Jamaica’s motto: One out of many” when discussing reactions to the Miss Jamaica World judges’ decision.