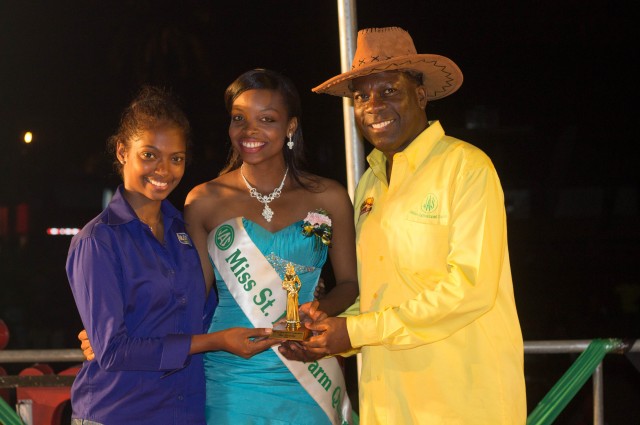 Twenty-five year old,  2015 National Farm Queen Peta-Gaye Stewart has a vision for agriculture in Jamaica and that is to see more young people getting involved in the sector.

She said Jamaica’s aging farming population will likely impact the country’s food security in the next few decades, and is calling for youth to join her in preventing this outcome.

In fact, Ms. Stewart, who was crowned National Farm Queen on the opening night of the Denbigh Agricultural, Industrial and Food Show in May Pen, Clarendon on July 31, has plans to embark on a project during her reign to encourage young people to become involved in agricultural pursuits.

She is yet to work out the details, but intends to collaborate with the other contestants in the Farm Queen competition for its implementation, in order to reach a wide cross-section of youngsters.

“A lot of young persons don’t find agriculture attractive for whatever reason and that’s where I come in. I want to empower them through agriculture by coordinating different programmes to engage them in, that they can see it as a viable career option,” she said.

“I want to partner with the other parish queens because they are passionate, knowledgeable young ladies like myself, who want to inspire change within the agricultural sector,” said Ms. Stewart, who is the parish queen for St. Mary.

Intelligent and articulate are also words that could be used to describe this vibrant young lady.

Not only did she receive a full scholarship to study at the College of Agriculture, Science and Education (CASE), along with a $50,000 cash prize and a hotel trip, for taking home the coveted crown, she was also awarded prizes for winning four sectional awards.

The National Farm Queen competition, hosted by the Jamaica Agricultural Society (JAS) for the 52nd year, requires that contestants complete a technical paper, do an oral presentation of the paper and also present a talent item.

Contestants are judged on knowledge of agriculture, home economics, deportment, poise, current affairs and communications skills, as well as active involvement in agriculture.

Ms. Stewart hails from Bonny Gate, a small farming community in St. Mary. She attended Brimmer Vale High school in the parish, attended sixth-form at Marymount High, and was involved in the 4H Club throughout primary and high school.

She has also been very involved in her community and describes herself as having a passion for service and a commitment to nation-building. She is also Public Relations Officer for the St. Mary Parish Development Committee, as well as for the Bonny Gate Benevolent Society. She is also a member of the neighbourhood watch.

After winning the farm queen competition at the parish level, Ms. Stewart said she helped to revive a branch of the JAS in her community because she believes, “it’s very important for farmers to have a platform where they can meet to discuss issues affecting them and unearth solutions to address those issues.”

She has been accepted to the University of the West Indies (UWI) to pursue a Bachelors degree in Public Policy and Management.

She expressed excitement to be National Farm Queen 2015, adding that the competition has allowed her to gain a much deeper appreciation for the agricultural sector.

“I have gained a wealth of knowledge, the experience was invaluable…the whole interaction was just awesome. It has significantly contributed to my personal development,” she said.

She intends to pursue a career in agricultural marketing, as she believes it’s critical that Jamaican farmers have a way to market their produce.