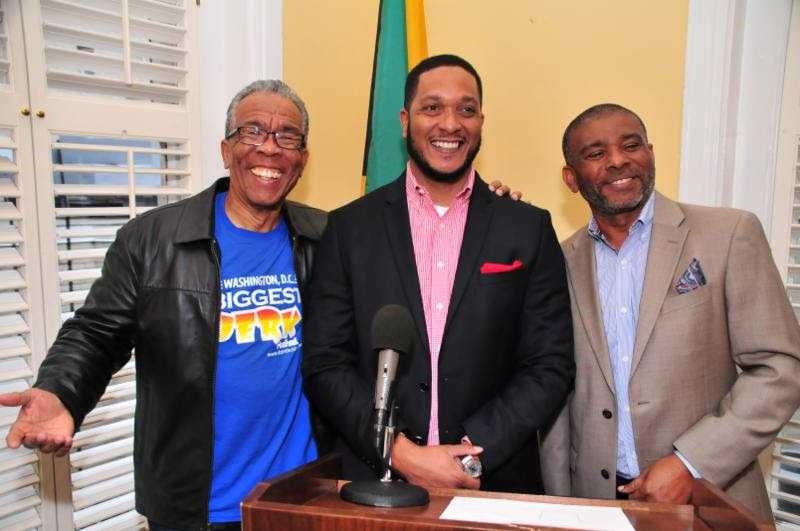 Following a very successful inaugural staging in Washington, DC last year, the Grace Jamaican Jerk Festival will return on Sunday, June 18, at its new home on the Festival Lawn at RFK Stadium, Lot 6, in celebration of June as Caribbean American Heritage Month. The announcement was made by Eddy Edwards, CEO of Jamaican Jerk Festival USA, Inc., at a media briefing on Monday, April 10th at the Jamaican Embassy attended by media, sponsors and guests.

“The move to RFK Stadium allows us to deliver a much better patron experience and overcome many of the challenges we faced last year on Pennsylvania Avenue,” stated Edwards, “There is more space to accommodate additional features such as an upscale VIP area, expand the kids zone and present a layout similar to the New York and Florida festivals.”

Edwards introduced members of the Florida, New York and Washington, DC teams and expressed appreciation to the Jamaican Embassy, media and organizations who went “over and beyond” to make last year’s festival a tremendous success. Wayne Miller, Business Development Manager for title sponsor Grace Foods USA, LLC., expressed the company’s strong support for the event and confidence in the producers.

Activities in the Jerk Cook-off pavilion will feature Food Network’s Chopped winner Andre Fowles and Chef Irie, host of Taste The Caribbean TV show, demonstrating and sampling tasty dishes. Celebrity Chefs will battle in fierce cooking clashes for bragging rights and the coveted Dutch Pot Trophy to the cheers of their supporters.

The Cultural Stage will offer a variety of artistic and literary performances celebrating “Jamaica 55”. Sounds of Culture will offer a dish of traditional folk songs while Divine Divas will excite the audience with contemporary dance and fashion. Mylez Gittens, a young violinist from Barbados will add a dash of flavor along with Richards Carnival Masqueraders, Storyteller, Joelle Wright all woven together by Dr. Sue, cultural educator and poet.

An expanded Kidz Zone will offer interactive activities to keep the young ones amused and engaged offering a special children’s menu offering jerk burgers, hot dogs as well as treats such as ice cream, cotton candy and other goodies.

Advance tickets are $25 and are available from Ticketmaster and selected Caribbean retail outlets. Kids 10 and under will be admitted free. Day of event tickets will be $35. Gates open at 11:00 am and the fun and gastronomic experiences continue until 8:00 PM. So come early and bring the entire family for a “Taste of Fun!” and an awesome Caribbean experience!