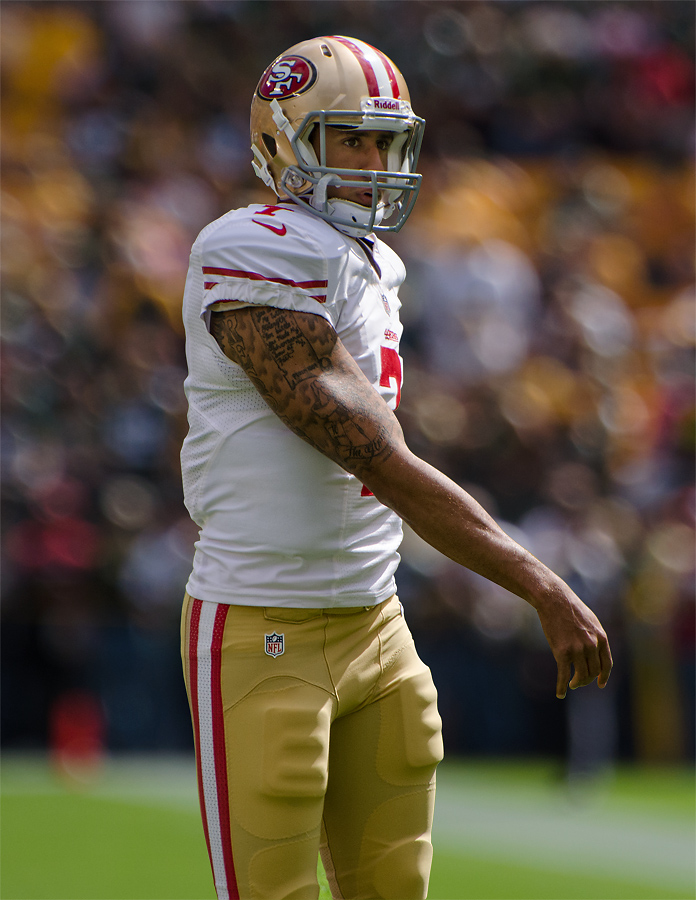 Here is the deal. I’m not a 49ers fan. I’m not a Colin Kaepernick fan. I however fully respect his position and stance. I initially questioned whether he was acting out to get out San Francisco 49ers, but I get his explanation.

To everyone and anyone without exception mad at his statement, his sit down, his position, whatever I say this: Where was you vocal, strident umbrage and outrage at the police state scumbags who choked Eric Garner to death? Where was your vocal and strident opposition to the many, many black and brown men, women and children killed by REAL scumbags, not millionaire ballplayers, real life fascist, racist dirtbags with badges killing unarmed and compliant men women and children? Is that American? Is that patriotic?

Those actions, and only those actions, are un-American and unpatriotic. Not vocally opposing those actions-THATS un-American. Not even giving thought to why a successful black professional athlete living in America feels the way he does and takes the position he has a great risk to his career and well-being (emotional, physical and mental) THAT is fundamentally un-American.

I respect his decision. I support his reasons behind. I hope others take action to initiate reasonable conversation about the issues WE ALL AS A COUNTRY are facing and will continue. And anyone who is quick to condemn him but silent when Eric Garner was choked to death, when Alton Sterling was killed, when another scumbag-again, not the athlete, a police state scumbag-shot Philando Castile while he was sitting unarmed and compliant in a car with his girlfriend and daughter, when you see a cop macing an 84 year old grandmother just because…when we see time and again scumbags (real scumbags), now, pay attention, not the millionaire athlete, real scumbags with badges and say nothing. Tell you what-stay quiet. Your opinion isn’t really important now.

When all of you who want to condemn Colin Kaepernick see the real scumbags doing wrong and are silent, well forgive me if I don’t take ANYTHING you say seriously on this topic. And FYI, I’m using the same very pointed, specific language mirroring what was said about Kapernick over the last couple of days. Scumbag. Facist. Douche. Dirtbag. For exercising his right to object. Get out of here with that noise.

The real and only disgrace is that it took this incident to get you all riled up. Sit down and speak up Kap, and I hope others follow.