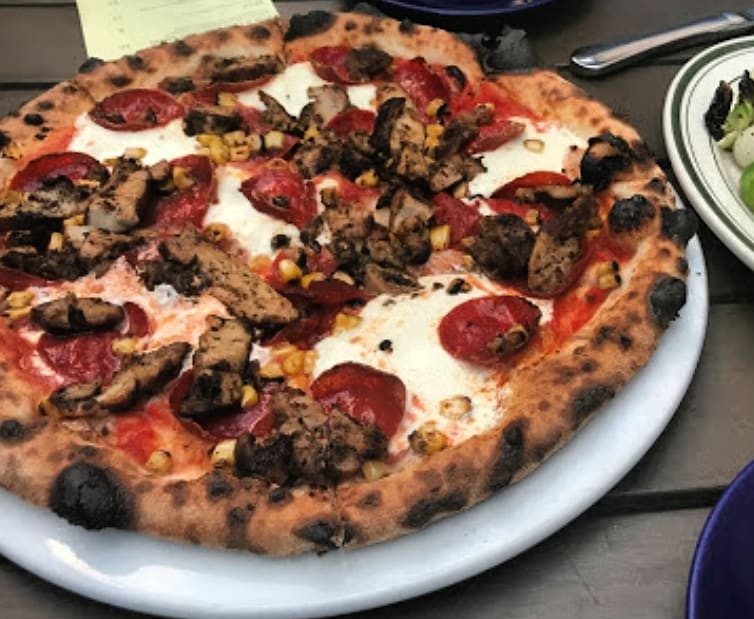 ZuriLee’s Pizza Bar offers pizzas with a distinctly Caribbean flavor in Prospect Lefferts Garden in New York. The cultures of New York and the Caribbean meet in the restaurant, which was opened and co-owned by two Guyanese-American brothers in 2015 near their original and traditional Caribbean restaurant, MangoSeed. According to Paul Burrowes, one of the brothers, “We are Caribbean and we know Caribbean food, and that’s always the first choice or go-to food because it’s your background,” but then his brother Jermaine and he began thinking about what other foods they like besides Caribbean. Growing up in Flatbush, the brothers recognized their love for pizza and decided to combine these two totally different, yet popular, cuisines. “We eat pizza three times a week — pizza is our thing and we grew up on New York style pizza.” The decision to take their culture and put on pizzas prompted major testing as they tried many combinations of flavors and styles before settling on their menu. The restaurant features wood-fired pizza with toppings like oxtail, jerk chicken, and salt fish, three of the most common foods in the Caribbean community. The brothers believed their approach would find a following Brooklyn’s large first- and second-generation Caribbean-Americas, as well as among curious foodies from throughout the city. The brothers acknowledged the balancing act they faced in attracting both traditional pizza lovers who tend to object to items like pineapple on a pie, and those who are more adventurous. “I was scared of putting jerk chicken on a pie, but now everyone wants that jerk chicken pizza, and the oxtail one,” said Burrowes.

“ZuriLee is fan freaking tastic! I really enjoyed my ackee and saltfish pizza who would have thought to have that on a pizza !! The atmosphere is so chill and they playing nice tunes! I was impressed with their sorrel”, said April H on a recent review posted on Yelp.