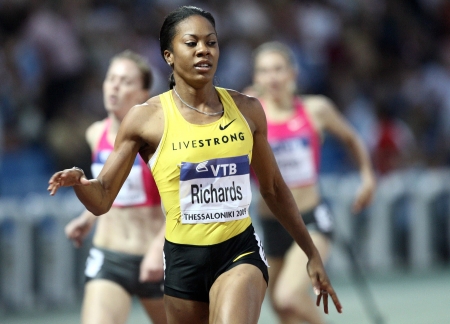 Jamaica’s Sanya Richards-Ross, one of the most admired athletes to represent the island, has decided to retire from competition at the age of 31. She will attend the 2016 Olympics in Rio as a television commentator, however. Although Richards-Ross’s performance has suffered due to injuries since the her gold medal in the 400-meters at the London games in 2012, her record of achievement remains impressive, and she has led the way for many women in track and field. She first competed to the United States in 2002 at the World Junior Championships in her home town of Kingston, Jamaica. She also had early success at ate 18 when she helped the United States 4×400-meter relay team win over both Russia and Jamaica in 2003. In 2009, she won an individual gold medal at the World Championship 400 meters with a time of 49 seconds. She was a finalist in her first Olympic competition in 2004 and won the World Indoor Championship in 2012. She competed at the Jamaica International Invitational many times over her career, with her races against Novlene Williams-Mills forming a large part of the history of that meet. Richards-Ross, the daughter of a former Jamaica football international and a star at Vaz Preparatory, has donated considerable equipment to Vaz Prep over the years and was guest speaker at the RJR Sports Foundation Sportsman and Sportswoman of the Year awards ceremony in 2010.